WASHINGTON — Pentagon officials are considering whether to keep U.S. troops along the southwest border an additional 45 days, potentially... 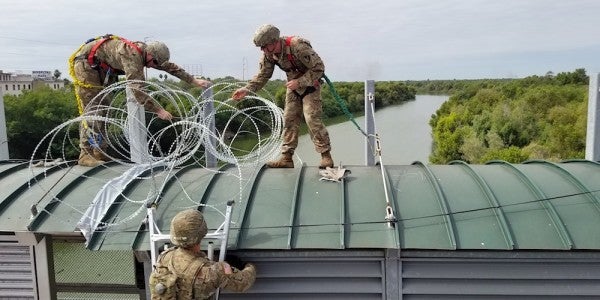 WASHINGTON — Pentagon officials are considering whether to keep U.S. troops along the southwest border an additional 45 days, potentially extending a controversial mission to assist the Border Patrol into next year, U.S. officials said.

The 5,800 troops now deployed in California, Arizona, and Texas are scheduled to depart Dec. 15. But the Department of Homeland Security, parent agency of U.S. Customs and Border Protection, has opened discussions with the Pentagon about delaying their departure until late January, according to an official who was not authorized to speak on the record.

If approved, the extension would represent another expansion of the military border operation, whose scope has steadily grown since President Donald Trump rushed troops to border posts in Arizona, Texas, and California shortly before the Nov. 6 midterm election.

An extension would keep troops away from home through the Christmas and New Year’s holidays, which would intensify criticism of the operation from Democrats, who have called the operation wasteful and unnecessary.

Only last week, the White House authorized troops along the border to detain, search, and if necessary use deadly force to protect other U.S. government personnel, a major change in the military role but one that Pentagon officials insisted would only be employed in dire emergencies.

Thousands of migrants are in the Mexican cities of Tijuana and Mexicali. Some clashed earlier this week at the San Ysidro border crossing with Border Patrol agents, who fired tear gas to prevent them from seeking to rush the border en masse. Unarmed U.S. troops were seen moving razor wire to block the attempted crossing.

If the mission is extended, one official said, the Pentagon could rotate new troops to the border and send some personnel who have been living in makeshift camps since October back to their home bases.

The Defense Department has sought to keep tight limits on the border operation. At the same time, other administration officials who advocate aggressive efforts to block immigration have sought to expand the military role to buttress the president’s incendiary charges that caravans of migrants moving north through Mexico pose an imminent threat to U.S. security.

The Homeland Security department has not made a formal request for an extension, Pentagon officials said.

Defense Secretary James N. Mattis told reporters Wednesday the two departments were in discussions about whether an extension was required.

“We’ll react to the Department of Homeland Security if they ask for it,” he said. “Right now we’re working with them on the staffs.”

Soldiers deploy concertina wire in a location along the Southwest border of the United States near Hidalgo, Texas. U.S. Army North is deployed to the southwest border under the authority of U.S. Northern Command to support the Department of Homeland Security and the Customs and Border Protection's mission to secure the border. November 2, 2018.U.S. Customs and Border Protection Office of Public Affairs

Mattis added that the troops had largely completed their original mission of strengthening protections with razor wire fences and vehicle barriers at dozens of legal border crossings, known as ports of entry.

“The ports of entry are pretty much, I think, done,” he said. “There’s a little on the flanks of a couple of them we’re still working on. So we’ll have to see if the request extends further.”

That could lead commanders of the operation to send home engineering and logistics troops who have been installing the additional barriers. Military police who would be called on in case of a riot or other large-scale attempt to cross the border would likely remain, along with support troops, helicopter units, and other specialized troops.

It’s unclear whether the overall size of the force would shrink if an extension were approved.

Mattis played down the possibility that troops could be involved in use of force against migrants, saying the Border Patrol had shown its capability of securing the border without direct involvement by troops.

“As far as the use of force, the Border Patrol is using what they believe is appropriate. We would be backing them up,” he said. “I can’t even forecast what would be necessary after seeing the Border Patrol’s response under the pressure that we saw this last weekend.”

Mattis did not address why the troops would need to stay on the border if the Border Patrol could handle security.

U.S. Northern Command, which is overseeing the border operation, said in a statement that an extension request from Homeland Security was possible but that the “mission to secure the U.S. border is temporary.”