The U.S. military acknowledged Thursday that 33 Afghan civilians were killed and 27 others wounded in a battle in northern... 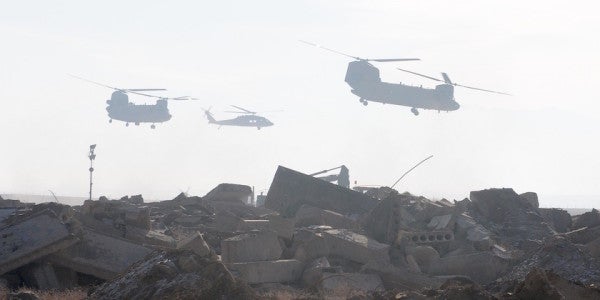 The U.S. military acknowledged Thursday that 33 Afghan civilians were killed and 27 others wounded in a battle in northern Afghanistan in November involving U.S. and Afghan forces.

The deaths occurred as U.S. warplanes launched airstrikes during an operation aimed at capturing Taliban commanders in Kunduz province, the military said in a statement announcing the findings of a two-month investigation.

During the joint U.S.-Afghan operation that began Nov. 2 in Boz-e Kandahari village, Taliban fighters opened fire from inside civilian buildings, prompting U.S. warplanes to carry out airstrikes to protect the soldiers, the investigation found.

The military said its forces acted in self-defense.

“The civilians who were wounded or killed were likely inside the buildings from which the Taliban were firing,” the military said in a statement. “In addition, a Taliban ammunition cache was struck and exploded, which also destroyed multiple civilian buildings and may also have killed civilians.”

The military said its investigation determined that U.S. forces “used the minimum amount of force required” to protect the ground troops.

Two U.S. soldiers and three Afghan army commandos were killed in the operation, along with 26 Taliban militants, including three commanders, the military said. Several other U.S. and Afghan soldiers were wounded.

“Regardless of the circumstances, I deeply regret the loss of innocent lives,” said Gen. John Nicholson, commander of U.S. forces in Afghanistan.

Nicholson said he wanted to assure the Afghan government “that we will take all possible measures to protect Afghan civilians.”

The operation came as the U.S. military stepped up efforts to help Afghan troops secure the city of Kunduz, Afghanistan’s fifth largest and the capital of Kunduz province. The Taliban had briefly seized it in the fall of 2015 and has threatened to recapture it in recent months.

In October 2015, a U.S. airstrike in the provincial capital hit a hospital belonging to the Doctors Without Borders medical charity, killing 42 people. The Pentagon later disciplined 16 soldiers for mistakes that led to the airstrike, though none faced criminal charges.

Thursday’s announcement did not assuage the anger of victims’ families. Reza Taimory, a 29-year-old farmer whose house was destroyed, lost seven members of his family in the attack, he said.

“Why did the Americans target civilians?” Taimory asked. “If there’s justice, then I want them to be followed and punished.”