82nd Airborne paratroopers just deployed without their phones. Your unit could be next

As America's adversaries become more sophisticated, U.S. combat troops heading to the war zone may have to get used to leaving behind their phones, laptops and even personal gaming devices, military experts say 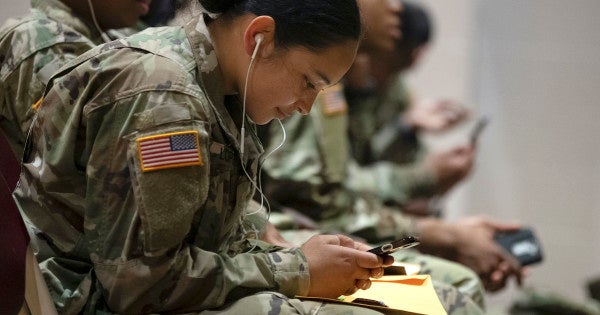 Editor's Note: This article by Matthew Cox and Gina Harkins originally appeared onMilitary.com, a leading source of news for the military and veteran community.

As America's adversaries become more sophisticated, U.S. combat troops heading to the war zone may have to get used to leaving behind their phones, laptops and even personal gaming devices, military experts say.

The Pentagon doesn't have a blanket policy barring service members from taking electronic devices on deployment, but combat commanders are beginning to prohibit them when going into the unknown.

Last week, Maj. Gen. James Mingus, commander of the 82nd Airborne Division, ordered his paratroopers with the 1st Brigade Combat Team to leave personal phones, computers and all electronic devices at Fort Bragg, North Carolina, when they were alerted for a short-notice deployment to the Middle East amid escalating tensions with Iran.

“My commander wanted to own the decision to avoid putting soldiers at risk,” said Lt. Col. Mike Burns, spokesman for the 82nd Airborne. “It's an issue.”

All the services have shifted from a counterinsurgency strategy to one of high-intensity combat across all domains, including cyber and electronic warfare, to face more sophisticated adversaries such as Russia, China and Iran.

Carrying phones and other devices didn't pose too much risk in Iraq or Afghanistan, because the Taliban and other insurgents weren't sophisticated enough to mine the signals and data, said Dakota Wood, a retired Marine officer with the conservative Heritage Foundation think tank in Washington. That's no longer the case, he added.

“I think there's a renewed awareness on signature management, which was very, very important in the Cold War,” Wood said. “The Soviets and NATO forces were very aware of radio direction, finding signals, intelligence and keeping your signature low.”

“If you don't want your lock picked, don't put in a door,” Whitehead said, describing how the enemy can easily locate soldiers when their smart phones connect to the internet or send texts and other data.

“Any time you are carrying around any kind of a transmitter there are obvious … geolocation issues that can be used for targeting; I think that is obvious to anyone who understands radio frequency,” he said.

This became a reality for a Marine during a recent large force-on-force training exercise at Marine Corps Air-Ground Combat Center Twentynine Palms in California's Mojave Desert.

The artillery Marine took a selfie that gave away his location — a decision that resulted in his unit becoming casualties in the exercise, Lt. Gen. Lori Reynolds, the Marine Corps' deputy commandant of information, told reporters last week.

Troops' photos can present the enemy with a source of intelligence, Whitehead said.

“When you have soldiers in the field, even when they are sharing things that they don't think are necessarily classified, it can still be leveraged in terms of intel and counterintelligence,” he said.

The decision to have paratroopers leave devices behind did not come from an Army-wide policy, according to Maj. Allie Payne, spokeswoman for the XVIII Airborne Corps.

“Operational security representatives and intelligence officers conduct risk analysis on due to the risk posed with these devices being effectively controlled,” he said. “Hence, commanders of deploying units can make decisions within their own units to mandate that they are not brought forward.”

The Navy did not respond to questions about whether that service is reviewing its policies on personal devices. One naval officer, who spoke on the condition of anonymity, said it's common for sailors to bring phones, laptops and other devices onto ships.

One of the obvious vulnerabilities of smart phones is the vast number of apps that are available to users and the potential cyber threats they may pose, Whitehead said.

“A commander has no idea what is on all the cell phones of all the people that are serving in that battalion, so how could you map all the vulnerabilities of all the apps and all the various functions and try to optimize that?” he said. “I'm not saying that couldn't be done, but it's clearly something that would need to be done if that is going to be the paradigm that you are going to allow privately owned devices in the forward areas.”

Wood said troops are likely to be much more restricted when it comes to electronic devices in the future. But those policies are best left up to the individual services or commanders, he added.

“I think when you get a one-size-fits-all top-down thing, it's cumbersome, it's too vague or it's overly prescriptive,” Wood said. “Different services are operating in different worlds and small-unit leadership, personal responsibility and discipline.”