President Donald Trump’s directive to pull 9,500 troops from Germany hits home hard for friends of America like Edgar Knobloch, whose Bavarian town of Grafenwoehr has been home to U.S. service members for seven decades 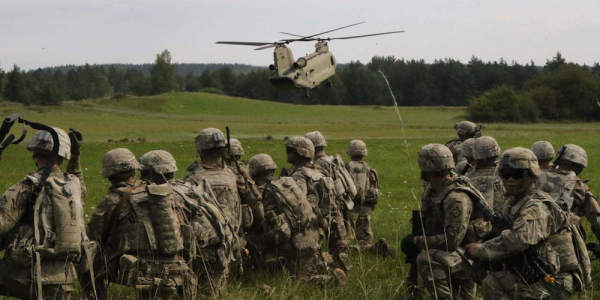 President Donald Trump’s directive to pull 9,500 troops from Germany hits home hard for friends of America like Edgar Knobloch, whose Bavarian town has been home to U.S. service members for seven decades.

Like Chancellor Angela Merkel, the mayor of Grafenwoehr was caught off guard. It’s the latest sign of the U.S.’s deterioration of ties with a loyal ally, one that not only hosts most of its troops in Europe but also has seen them fuel the local economy.

This medieval town, with a tiny population dwarfed by the size of the American military presence, shows just what a shadow the U.S. has cast over Europe after World War II and what its retreat symbolizes in the eyes of locals and international observers. Another troop cut would signal a further break with a legacy of two generations.

Located near the former East German border, Grafenwoehr is a place where overseas U.S. military infrastructure and community bonds survived the end of the Cold War. Locals celebrate Thanksgiving and enjoy spare ribs. Every year, they turn out by the thousands for the German-American Folk Festival to share beer, bratwurst and country music with the roughly 11,000 U.S. troops based at NATO’s biggest training area in Europe.

“They’re completely integrated here,” Knobloch, 55, said in an interview. “Restaurants are bilingual. There are mixed marriages, mixed families. You often hear from the older members of the community: ‘The Americans liberated us.’”

There hasn’t been much nostalgia between Trump and Merkel, who have clashed repeatedly over trade and Germany’s slow timetable for meeting the North Atlantic Treaty Organization’s defense spending target. Last month, Merkel snubbed Trump on his plan to hold an in-person Group of Seven summit in June which he’d like Russian President Vladimir Putin to attend.

While Trump has taken aim at Germany’s economic might, Merkel — the longest-serving G-7 leader after 15 years in power — has stared him down across a broad front, from defending the rules-based global economy to policy disputes such as defense spending. A physicist by training, Merkel also contrasted with Trump in her science-based approach to reopening Germany from its coronavirus lockdown.

Lawmakers and government officials in Berlin criticized Trump’s troop decision, which would cut U.S. forces in Germany by slightly more than a quarter, as a snub.

“These plans demonstrate once again that the Trump administration neglects a central element of leadership: the involvement of alliance partners in the decision-making process,” Johann Wadephul, deputy head of Merkel’s parliamentary caucus, said in an emailed statement.

Trump’s decision and the way it was communicated hint at how much Germany’s relations have cooled with a U.S. president who has publicly questioned NATO’s value. By mid-day Saturday, the German government had no official word from Washington on the drawdown plan.

Green party lawmaker Tobias Lindner evoked Trump’s appearances at NATO summits, where has he berated U.S. allies to step up defense spending and called Germany “a captive to Russia” for refusing to halt the Nord Stream 2 gas pipeline project.

“Somebody who acts in this way can’t show up in Brussels with the attitude of reminding alliance partners of their duties,” Lindner said.

Even so, a U.S. troop reduction may make military sense, since Germany nowadays serves mostly as a hub for U.S. operations in other parts of the world such as the Middle East and North, said to a German government official who asked not to be named because the decision hasn’t been publicly announced. Other key U.S. installations in Germany include Ramstein Air Base and the Landstuhl Regional Medical Center hospital.

During the heyday of post-World War II relations, U.S. troops were welcomed in West Germany as liberators from the Nazis and a bulwark against a Soviet invasion. Older Germans remember when Elvis Presley was stationed as a G.I. in 1958-60 at Friedberg, north of Frankfurt. To the delight of young German women, he even recorded a song in broken German about his time there. The Army closed the post in 2007.

Attitudes shifted in the late 1970s and early 1980s, when NATO’s decision to base U.S. Pershing II’s in Germany to counter Soviet ballistic missiles triggered mass protests in West Germany. Since the fall of the Berlin Wall in 1989, some German politicians have called for the removal of U.S. nuclear weapons from German soil.

Ties forged over decades by American service members who rotated through Germany have left their mark in the U.S., too. While 85% of Americans view U.S. military bases in Germany as important for U.S. national security, only 52% of Germans say the bases are important for their own national security, according to a poll by Pew Research and the Koerber Foundation published in November.

Reports that Trump is considering further cuts and a possible troop shift to Poland have surfaced for at least two years. Meanwhile, U.S. troop strength in Germany has dwindled to about 34,500 from a peak of 274,000 during the 1960s.

“Such a pullout would be regrettable in every way,” Norbert Roettgen, a Merkel ally who heads the German parliament’s foreign affairs committee, said in an interview with Funke Media Group. “I can’t see any rational reason for the withdrawal.”

“This affects not only 9,500 troops, but also their families, which means about 20,000 Americans in total,” Peter Beyer, the government’s coordinator for trans-Atlantic relations, told the DPA newswire. He said he fears lasting damage to U.S.-German ties.

At Grafenwoehr, Mayor Knobloch says American service members are so much a part of local society that they immediately abided by Bavaria’s measures against the coronavirus pandemic. He’s betting the U.S. won’t ditch Grafenwoehr, in part because the Army has invested in the facility in recent years.

“It would be a great pity if it came to that,” the mayor said. “In Grafenwoehr, you can really see how understanding among nations functions in daily life.”