US Troops In Iraq Are Training Iraqi Soldiers To Become Rangers 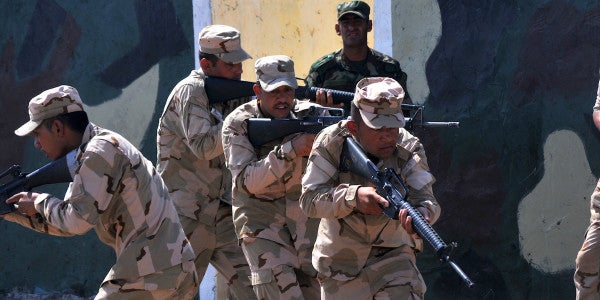 Soldiers from the 101st Airborne Division are running a Ranger-style training program for Iraqi forces at Camp Taji near Baghdad to develop advanced warfighting skills among selected Iraqi army officers and enlisted personnel.

“This program is important because it lays the foundation for an elite Iraqi unit,” said Capt. Peter Jacob, commander of Company A. “Students start at day one as an individual and come away at the end of this course as part of a team.”

U.S. Army Ranger School is a 62-day course that's described as the service's premier infantry leadership course, an ordeal that pushes students to their physical and mental limits.

An Iraqi army ranger student takes aim at his target during a run through a shoot house at Camp Taji, Iraq, July 18, 2016.U.S. Army photo by 1st Lt. Daniel Johnson

During the grueling course, U.S. Ranger candidates are exposed to everything from fitness and swim tests, to land navigation exercises and a 12-mile foot march, to obstacle courses and parachute jumps, to mountaineering tests and mock patrols — all on limited food and sleep.

Though based on the U.S. Army's Ranger training program, Company A trainers incorporate aspects from other advanced programs as well, according to the release.

“The program itself starts with a 21-day selection process similar to Special Forces selection,” said Jacob, himself a graduate of the U.S Army Ranger school. “It's a [24-hour-a-day] operation where our cadre go out and validate each student, no matter what the rank.”

This process helps narrow down the number of trainees as they start their multi-layered journey.

“You can already see the discipline of the soldiers,” said 2nd Lt. Gregg Bernthal, a platoon leader in Company A. “The selection process weeds out those who do not have the intestinal fortitude to stay and fight. The separation from normal, basic soldiers is the rigorous selection process they go through to become Iraqi Rangers.”

The exhaustive selection process is just the beginning. Candidates proceed to the next of many levels designed to challenge them.

“There are exercises done to test memory and intellect and the physical aspect along the lines of [U.S Army] Ranger school where they will conduct various team-building exercises,” Bernthal said.

“The students also must be physically fit and be able to understand infantry tactics. Even if they make it through all of the physical and intellectual challenges, they still have to participate in a selection board at the end of the process. The board reviews performance throughout the class, and a panel of U.S. and Iraqi officials determine the eligibility of the candidate.”

After selection is complete, students move into advanced individual training, where they refine their skills in classes led by their trainers. To pass exercises such as the rifle qualification range, they must meet U.S. Army standards, according to the release.

“[Advanced individual training] is a program that begins the training from basic rifle marksmanship all the way to a culminating event,” Jacob said. “The culminating event includes live-fire exercises as teams, squads, and platoons.”

During one training exercise, students took the lead and taught a room-clearing class to one another, while American trainers watched. They practiced on glass houses and then moved to room clearing in an actual building the next day.

As Company A produces more Iraqi Rangers, the importance of the mission to build partner capacity is apparent — especially as Iraqi Security Forces continue their push to retake territory from Da'esh, said Bernthal, using another name for the Islamic State of Iraq and Syria.

“[Iraqi Rangers are] go-getters, and I think that in itself is a success story,” Bernthal said. “Having well-trained leaders is going to be extremely important in the fight.

“Because Da'esh has been dug in for so long now, the Iraqis are going to have to think on their toes. There's going to be a lot of different situations that they find themselves in. Good training is always something that the Iraqi soldiers in this course will be able to fall back on.”