The Navy’s hospital ship USNS Comfort will depart Naval Station Norfolk by the weekend and head to Hurricane Maria-ravaged Puerto... 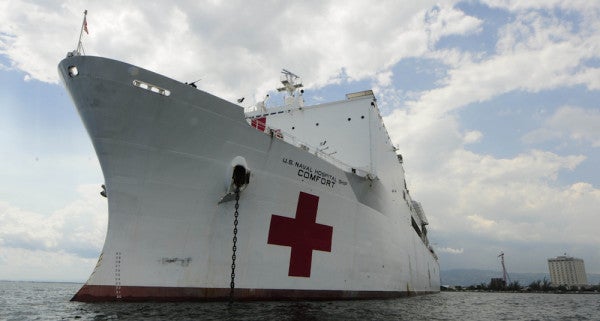 Federal Emergency Management Agency Administrator Brock Long announced from the White House on Tuesday that the ship would join other military relief and recovery efforts in the region. Comfort is expected to take four to five days to arrive, Wierzbicki said.

“We will make the best possible speed,” he said.

Long’s announcement came among criticism that the U.S. government’s aid response to the island territory of 3.4 million has been inadequate and two days after Hillary Clinton called on the Trump Administration on Twitter to “send the Navy, including the USNS Comfort, to Puerto Rico now.”

“These are American citizens,” Clinton tweeted.

President Trump, Sec. Mattis, and DOD should send the Navy, including the USNS Comfort, to Puerto Rico now. These are American citizens. https://t.co/J2FVg4II0n

About 44 percent of Puerto Rico’s population is without drinking water, the Pentagon said Tuesday, and 11 of 69 hospitals have fuel or power.

The Comfort is operated by civilian mariners and, fully crewed, carries about 1,215 Navy medical personnel.

Military units from across the U.S. have been responding to the Caribbean in the aftermath of Maria, including members of the Virginia National Guard. Ships include the Norfolk-based amphibious assault ship USS Kearsarge and dock landing ship USS Oak Hill, based at Joint Expeditionary Base Little Creek in Virginia Beach, along with the USS Wasp.