More than nine months after embarking on what was supposed to be a seven-month round-the-world deployment, the aircraft carrier Abraham Lincoln is finally on course for its new home port of San Diego 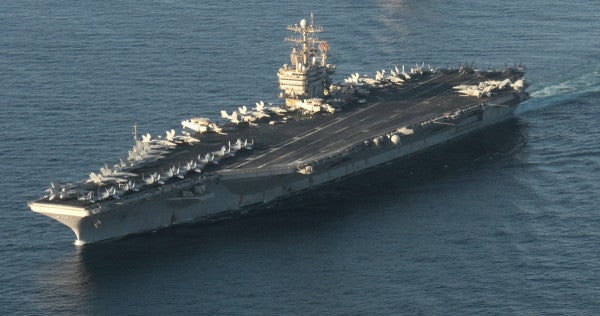 SAN DIEGO, Calif. — More than nine months after embarking on what was supposed to be a seven-month round-the-world deployment, the aircraft carrier Abraham Lincoln is finally on course for its new home port of San Diego.

The ship, which has been operating in and around the Middle East since May, left the region in mid-December and is bound for home.

When the carrier left Norfolk, Va., on April 1, its crew knew it was in for a deployment that was outside the norm. Not only was it deploying to the Middle East, but it also was switching home ports from the East Coast to the West, originally due in San Diego around Halloween. Many Lincoln family members moved across the country over the summer — without the help of their sailors — in order for children to start school in time for the new school year.

World events — and maintenance issues on another carrier — led to the ship's mission being extended well beyond its original return date.

In August, the aircraft carrier Harry S. Truman, which was slated to replace the Lincoln in the Middle East, experienced an electrical failure that resulted in an extra three months of repairs. The Lincoln would need to remain on station until relieved.

The delay came at a time of heightened tensions with Iran and a subsequent boost of military resources in the region.

Exacerbating the stress of the deployment was the relative inexperience of the crew, according to Gina Swaim, a command ombudsman for the Lincoln. Ombudsmen serve as liaisons between the ship's commanders and family members.

For many Lincoln families, this deployment is their first. Beginning in 2013, the ship spent four years in the Newport News shipyards for midlife reactor refueling and maintenance. Almost two years of sea trials and qualifications followed, so by the time it left Virginia in April, many on board had never deployed.

“It's a hard lifestyle,” Swaim said. “It's not easy having your loved one be gone, and it's not easy going through the extensions.”

Swaim has plenty of experience — she was in the Navy from 2012-17, most of the time assigned to the Lincoln. It's where she met her husband, she said. He's currently stationed on the ship as an aviation boatswain's mate.

Swaim said she relocated to San Diego in March, but that many families made the move during the summer.

“There were a lot of families,” she said. “I noticed more coming in August.”

Command ombudsmen, Swaim said, helped families connect with Navy resources to help them with relocation, including housing and job searches.

Jaiden Chase married a Lincoln sailor in March — her high school sweetheart, she said — just before the ship left Virginia. She moved to Chula Vista at the end of the summer.

“I didn't start the process until August,” Chase said. “House searching by myself, it was kind of stressful — you want to make sure you make the right decision.”

Chase, who found a job locally as a publicist, ended up settling on an apartment in Chula Vista — one her husband hasn't yet seen.

When the ship was extended in October, people in the community rallied to send care packages to the crew, said Lt. Cmdr. Jesus Uranga, the public affairs officer on board the Lincoln.

“It is always difficult to be away from our loved ones, especially during the holidays,” Uranga said. “We remain incredibly grateful for the outpouring of support we have seen from so many across the country, including our new home of San Diego.”

“The length of this deployment is not ideal or something that's going to become a regular thing … (but) they are not going to be as predictable as they were in the past,” Flanders said. “In the case of the Abraham Lincoln, it was extended due to circumstances related to maintenance and availability, but as a rule, going forward … our crews and their families should, prior to deployment, discuss the possibility of something like this.”

Uranga said the ship and its ombudsman team do what they can to keep sailors in touch with their families.

“We are fortunate that today's technology allows us the ability to communicate with our families and friends more freely,” Uranga said. “We pass along as much information as we can to our command ombudsmen, and thanks to their tireless work, we are able to provide updates and information.”

One major communication tool for the Lincoln's ombudsman team has been Facebook, Swaim said.

“There's a private ombudsman group whose members are vetted against a ship roster and only accessible by those approved by a crew member,” Swaim said. “If information is sensitive, we host meet-ups.”

Those meet-ups are bicoastal, according to Swaim, because some families chose not to make the move to San Diego. She said that the Lincoln's sailors and their families really demonstrated something this year — their strength.

“I believe that this deployment, as unfortunate as the extension was, made families stronger in the end,” she said. “It showed them what they're capable of.”

Navy officials would not comment on when the Lincoln will arrive in San Diego but it is expected sometime in January.