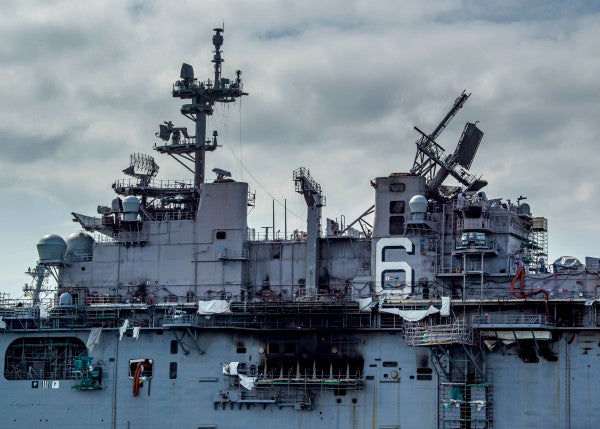 Editor’s note: This article by GIna Harkins originally appeared on Military.com, a leading source of news for the military and veteran community

Firefighters have extinguished all known blazes on the Navy amphibious assault ship Bonhomme Richard after four-plus days of round-the-clock efforts.

Teams are inspecting every space on the Navy ship, which has spent days burning pier side at Naval Base San Diego. The fire started Sunday morning in the ship's lower cargo hold, and it quickly spread throughout the vessel.

Now, officials with Naval Surface Force Pacific say it will launch an official investigation once every space is checked and it's determined there are no longer any active fires.

“We did not know the origin of the fire,” said Rear Adm. Philip Sobeck, commander of Expeditionary Strike Group Three. “We do not know the extent of the damage. It is too early to make any predictions or promises of what the future of the ship will be.

“We cannot make any conclusions until the investigation is complete,” he added.

Sixty-three people — 40 sailors and 23 civilians — were hurt battling the fire, which at points topped 1,000 degrees. Teams from across several Navy commands and the San Diego Fire Department fought the blaze for days. They did so inside the ship, from the pier, and in nearby boats and helicopters.

“We had support from the air and sea,” Sobeck said. “Three helicopter squadrons conducted more than 1,500 water bucket drops, fighting the fire and cooling the super structure and flight deck, enabling fire crews to get onboard to fight the fire. Tugs also provided firefighting support from the waterline, cooling the ship's hull.”

Late Wednesday night, firefighters were evacuated from the Bonhomme Richard as the ship again tilted. The crews were moved to the pier, officials said at the time, out of an abundance of caution as they monitored the ship as it settled.

By Thursday morning, they were again allowed to enter the ship.