When terrorists attacked the USS Cole, crew members refused to give up the ship 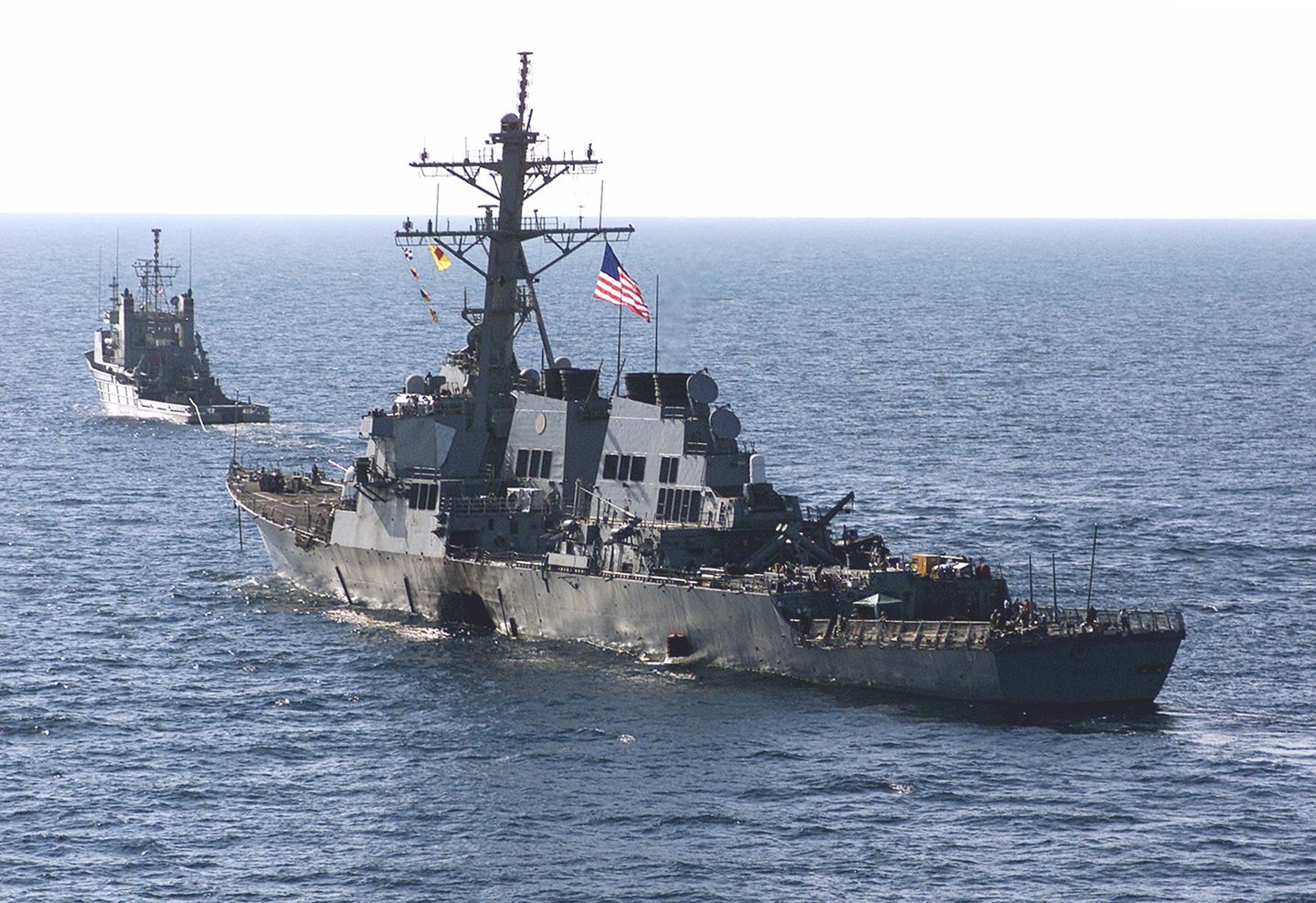 Not all Rear Adm. Derek Trinque’s sailors know where he was 20 years ago, but the event and its aftermath had a profound effect on his leadership style in the decades since.

Trinque was the operations officer on the guided-missile destroyer Cole when two suicide bombers in a small boat laden with explosives targeted the ship during a refueling stop in Yemen’s Aden Harbor. Seventeen crew members were killed and dozens more hurt in the late-morning blast on Oct. 12, 2000, when the explosives ripped a 40-by-40-foot hole through the destroyer’s port side.

Retired Cmdr. Kirk Lippold, the Cole’s commanding officer, recalled how his crew sprang into action, despite the ship’s 1MC announcing system — along with its back-up battery — failing.

“They literally fell back on the training,” Lippold told Military.com of his crew. “No one panicked. They set about dividing into three groups: damage control to save the ship, triage to say their shipmates, and security to prevent what could be another attack.”

On October 12, 2000 #USSCole (DDG 67) was attacked while being refueled in the port of Aden, Yemen. #Remember67 @surflant @US5thFleet #CENTCOMCDR pic.twitter.com/W9Kktsv2mu

The response was extraordinary. In an age when sailors weren’t expecting an act of war to hit their vessel nearly a year before the 2001 terror strikes in the U.S. launched the military into years of sustained conflict, they reacted.

The Cole, because of their actions, was saved. The destroyer remains operational today.

Much has been written about what the crew did in the hours and days following the attack, resulting in numerous awards and commendations. For two now-senior Navy officers who were aboard the Cole when that blast hit, Lippold’s candor about the emotional effects it would have on the crew left a mark.

Before post-traumatic stress and resiliency training were part of every service member’s lexicon, Lippold gathered his crew to tell them, “It’s normal for you to feel this way.”

“For him to come out and tell us explicitly that we should expect to need help and need to talk to people, and that none of us were immune to the stresses that we were going through and were going to be going through, was incredibly powerful,” said Trinque, now the assistant commander for career management with Navy Personnel Command.

Related: 20 years after the attack on the USS Cole, memories of heroism and loss

Capt. Joseph Gagliano, Destroyer Squadron 60’s commodore, agrees. After two decades of war overseas, he said the Navy is much more educated on post-traumatic stress than it was in October 2000.

“It was something of a foreign concept to us at the time, so I was grateful that he introduced it,” Gagliano said.

Lippold, the son of a psychologist who at one point specialized in stress management, recognized the likely struggle ahead. It was imperative, he said, that his crew understood that the anger, anxiety, agitation, lethargy and sleeplessness they were dealing with were normal responses.

“‘It’s OK,'” he recalled telling the crew. “‘It’s your mind processing through this attack and the aftermath of what’s happened in the fact that we’re prying our shipmates out of the wreckage and giving them honors departures, ceremonies, or carrying them off in body bags.'”

They would get through it, the former CO added, but had to do it together.

Navy personnel across the fleet will pause at 11:18 a.m. local time Monday to remember those killed or injured in the blast two decades ago.

“Twenty years later, it is important to recognize how these acts of bravery and heroism were nothing short of extraordinary,” Chief of Naval Operations Adm. Mike Gilday said in a message to the fleet. “… The example set by the Cole Sailors is clear: A well-trained crew, even after a devastating blow, can rise to the occasion and save their ship.”

While the 20-year anniversary might make more headlines, Lippold said it’s no more important than any of the previous years. Each year, he reflects on the 17 fallen, the injured, and what his crew did to save their ship.

Lippold recalled facing pressure from Washington and top Navy leaders to allow some of his crew to leave the ship in the aftermath of the attack. He pushed back, saying it was important to keep the crew intact.

They pulled out of port together, he said, and they would go home together. While not everyone was thrilled with the decision, the former commanding officer said he remains grateful he made it.

“In the long view of history, that decision had a bigger impact than any I made, because that bonded us together as a crew,” he said.

The crew not only leaned on each other right after the attack, but also in the years since. Trinque calls the bonds forged that day in Yemen “family-like.”

The admiral recalled telling Lippold when psychologists visited the crew after the attack that he didn’t need to talk to them.

“I think I made the mistake of saying ‘touchy-feely’ to Kirk Lippold at one point and he said, ‘You’re not going to say that. One, you probably need the help as well as anybody else, but two, as the department head in the ship, if anybody hears you saying that, then you’re pushing them away.'”

For an officer early in his career, that was an important lesson, Trinque said.

“Leaders … need to make sure that we are just pounding home to our sailors that [help] is there, it is right to do this,” he said. “It is a way for us to ensure that people can keep serving and not just deal with things, but overcome them.”

Gagliano said the Cole attack affected his leadership style, too.

“It informs my understanding of warfighting,” he said. “… The lessons I learned on October 12th allow me to convey in personal terms how warfighters react under stress and how we can prepare them ahead of time.”

Making sure sailors are battle-ready is a point Gagliano said he emphasizes when speaking with officers and chiefs on Destroyer Squadron 60 ships.

“We were attacked by terrorists, but the coming great power war will come from China or Russia,” he added. “Everything our sailors do must center on preparedness for the coming war.”

Having leaders in the fleet who were on the Cole strengthens the Navy and helps make the nation safer, Lippold said. Trinque commanded a destroyer in the same class as the Cole, and Gagliano is leading crews in Europe.

Trinque said if there’s one positive out of the attack, it’s that he can explain to his sailors why their training matters.

“Gone are the days of ‘because I said so’ leadership,” he said. “… I have an experience that I can use to help answer some of those questions. I can tell you, my shipmate, why we are doing this kind of training, and how it has served me.”

In the aftermath of the Cole attack and years of combat in the Middle East, Navy leaders have stressed that training and good physical, mental and spiritual health build resiliency. The final battle problem at Great Lakes in Illinois, where sailors go to boot camp, is also modeled after the challenges the Cole crew faced.

As the entire Navy pauses to reflect on the Cole crew Monday, Gagliano said he hopes it reminds sailors of the seriousness of their business.

“There are many reasons sailors join today’s Navy — service to country, quality employment, education benefits — but in the end, we are a warfighting organization.

“Every sailor needs to be ready every day,” he said.