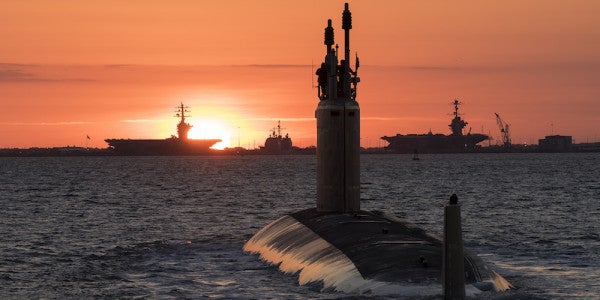 The new nuclear-powered submarine is the fifteenth Virginia–class vessel to be completed. Unlike many other defense programs, the vessel was completed on time and on budget. Colorado will be formally commissioned into service early next year in the spring.

“The Colorado is the most capable Virginia-class submarine bringing advanced capabilities and technology to the Navy fleet.”

According to NAVSEA, Colorado is the fifth of eight planned Virginia-class Block III submarines, which feature a redesigned bow where 12 individual vertical launch tubes which are replaced with two large-diameter Virginia Payload Tubes. Each payload tube is capable of launching six Tomahawk cruise missiles—or they could be used to house other payloads in the future. The Block III vessels also replace the traditional air-backed sonar dome with a new horseshoe-shaped water-backed Large Aperture Bow (LAB) sonar array, which not only more capable but also more reliable.

The Navy and the submarine industrial base have worked hard to reduce the cost of buying and maintaining the Virginia-class submarines as they try to ramp up the production of attack boats to meet an SSN shortfall. General Dynamics Electric Boat is understandably proud of their work on Colorado.

“This delivery demonstrates the skill and commitment of everyone involved in the Virginia-class submarine program,” Electric Boat president Jeffrey S. Geiger said in a statement.

“Delivering Colorado is a significant achievement that helps the Navy meet its shipbuilding goals and ensures our continuing success as a business.”

Once the Navy, Electric Boat and the Huntington Ingalls Newport News finish with the Block III submarines, the sea service will move on to building the more reliable Block IV Virginias. However, in the future, the Navy will eventually start building the much more capable Block V Virginia-class submarines, which will feature four additional launch tubes in a new hull segment called Virginia Payload Module.

The first Block V will start construction in 2019 as the second submarine (SSN-803) built that year. The Block V submarines will add a Virginia Payload Module (VPM) that will add four additional payload tubes amidships, each of which can accommodate seven Tomahawk cruise missiles for a total of 28 weapons. Overall, the Block V Virginia-class will be capable of launching 40 Tomahawk cruise missiles from its payload tubes.

All subsequent Virginia-class submarines are expected to feature the VPM. The Navy is urgently trying to build more submarines as it scrambled to try to meet its stated requirement to for 66 SSNs. However, the Navy’s fleet will dip to only 41 SSNs by 2029, unless the service takes immediate action.