In 1985, The Navy’s First Nuclear-Powered Aircraft Carrier Almost Sank Off The Coast Of California

Spend some time with Google Earth, an atlas or a globe and you will see that California, for peoples used... 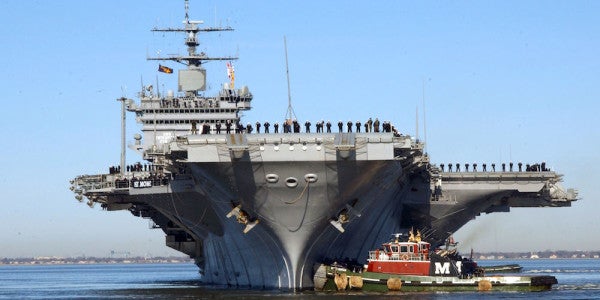 Spend some time with Google Earth, an atlas or a globe and you will see that California, for peoples used to the Atlantic, was indeed the far side of the world well into the nineteenth century. What is now one of the most populated, navalized coastlines on Earth remained poorly known even to mariners.

Somehow such mystery lingers, for once the world’s most powerful warship nearly wrecked herself upon a drowned island one hundred miles west of San Diego. Chris Dixon, who masterfully chronicled the origin of giant-wave surfing in his 2011 book Ghost Wave, surfaced this sea story of the USS Enterprise’s 1985 encounter with the Cortes Bank, where rock, water, and wind collide to form sea monsters.

The Channel Islands of Southern California make up the visible heights of a vast submerged mountainous region nearly the size of the Sierra Nevada—the Southern California Borderland. Reaching from Point Conception to the north coast of Baja California and stretching hundreds of miles out to sea, the Borderland forms a huge landscape of peaks, ridges, and basins up to a mile deep.

The first people to settle the Channel Islands during the last Ice Age experienced places very different from today. Sea levels fifteen thousand years ago were one hundred feet lower or more. Pygmy mammoths only six feet tall roamed the single great island off the Santa Barbara coast now made up of the four islands of the Channel Islands National Park.

As sea levels rose, the most remote island beyond San Clemente submerged beneath the waves, leaving a miles-wide shoal—Cortes Bank—and a fang of rock a few feet deep—Bishop Rock. But the bulk of the island remained, forming a huge buttress thousands of feet deep sitting square in the path of waves rolling in from the western Pacific.

For centuries the only regular sea traffic by Europeans along the west coast of North America were the Manila galleons, the Spanish warship-freighters loaded with billions of dollars’ worth of treasure that made landfall around Cape Mendocino on their journey home to Acapulco, Mexico.

Most captains sailed well clear of the mainland and the islands to the south until the 1800s. Then Yankee skippers sought California products and whales, along with eager passengers during the Gold Rush. American captains began noticing strange things in the waters west of the Channel Islands. Two ships without real connections to the submerged features bestowed their names on them: Cortes Bank for the SSCortes and Bishop Rock for the SSBishop.

But the great shoal really should be named for the first ship to notice its wondrous effects: the USSConstitution. On January 5, 1846, as war loomed with Mexico, the Constitution was cruising off Southern California when crew members spotted a large patch of white spume and the roar of breakers. This is the first record of the waves that would enter history as the largest ever surfed. Under certain conditions of wave, wind, and current, the seas piled up on Cortes Bank and Bishop rock into eighty-foot-high mountains of perfect curl, whose roar could be heard for miles in the middle of the deep blue sea.

One of the few Navy ships to rival the Constitution for fame, the USS Enterprise encountered Cortes Bank and Bishop Rock on November 2, 1985. The carrier and her air wing were conducting an Operational Readiness Exercise (ORE) out of San Diego, and the skipper, Capt. Robert L. Leuschner Jr., wasn’t pleased with how things were going.

He had a lot on his mind. The ORE involved simulated multiple airstrikes on defended targets, and the ship needed to keep to the wind to get the planes launched and landed swiftly. The navigator alerted him to the proximity of Cortes Bank and plotted a course correction. At that Captain Leuschner was distracted by what turned out to be a false report of a gunman below decks. During the precious moments when communications and awareness were tied up, no one noticed the carrier’s approach to the bank.

The impact of a quarter-mile-long nuclear-powered object with a thirteen-mile-long solid rock is prodigious. The drowned island tore a sixty-foot-long gash in the side of the Enterprise’s torpedo-resistant hull. Three of the four giant propellers were totaled and the port keel gone.

Related: The Navy Wanted To Merge A Battleship And An Aircraft Carrier To Fight Russia »

The giant warship floated off the shoal and righted itself with counterflooding; later, Marines stood guard against sharks while divers assessed the damage. If naval distraction and miscommunication got the captain into trouble, naval preparedness got the ship out of danger in good order.

Other Navy ships have not been so lucky in such encounters. In 2005, the attack submarine USS San Franciscoran into an uncharted seamount in Micronesia, and nearly sank. A minesweeper wrecked itself on a reef in the South China Sea not long ago.

The sea tale of the Ship and the Rock is a caution for all good sailors.