The USS Enterprise is being harvested for parts for other U.S. Navy flattops 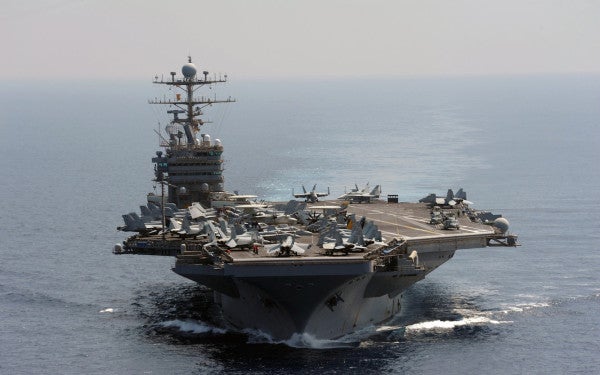 The world's first nuclear-powered aircraft carrier — the USS Enterprise — is being harvested for parts for other U.S. Navy flattops.

The Enterprise waged war from Vietnam to Afghanistan during its 51 years of service. Decommissioned a little over two years ago, the “Big E” rests at the James River shipyard at Newport News in Virginia, where it waits on the Navy to figure out what to do with the enormous and one-of-a-kind ship.

But while CVN 65 is no longer taking the fight to the enemy on the high seas, it will nonetheless live on in its successors.

“We are harvesting as many parts as we can from the Enterprise,” Chris Miner, Vice President of In-Service Carriers at Newport News, told Defense One's Marcus Weisgerber and Brad Peniston during a visit to Huntington Ingalls Industries' Newport News Shipbuilding. “She's still giving back even today.”

Parts from the Enterprise are being incorporated into existing Nimitz-class aircraft carriers. Pieces of the retired Navy vessel will also be added to future Ford-class carriers, including one that bears the same name.

The USS Abraham Lincoln was a recipient of one of the Enterprise's anchors.

The anchor for a Nimitz-class carrier weighs 60,000 pounds. The chains add another 20,500 pounds.

The USS George Washington, along with the Lincoln, received components of the Enterprise's aircraft launching catapults.

U.S. Navy aircraft carriers rely on steam or electromagnetic catapults to launch aircraft. The launch system is more effective and efficient than the ski jumps seen on Russian and Chinese carriers.

The Navy has taken possession of the Enterprise's four 32-ton propellers. It is unclear at this time what the Navy intends to do with them.

Propellers of the USS Enterprise.(U.S. Navy(

Part of the decommissioned USS Enterprise's steel hull has been taken out and melted to become part of the keel, a structural backbone for the ship, for the future USS Enterprise (CVN 80), one of the Navy's elite new Ford-class supercarriers

There is also the possibility that parts of the nuclear-reactor plant can be used on other carriers, despite the plant being quite different from more modern carriers, having eight small reactors rather than the two larger ones seen on Nimitz and Ford-class carriers

SEE ALSO: In 1985, The Navy's First Nuclear-Powered Aircraft Carrier Almost Sank Off The Coast Of California

WATCH NEXT: The Enterprise Carrier Strike Group In Formation