The USS Fitzgerald, a guided-missile destroyer, has collided with a Philippine-flagged merchant vessel ACX Crystal about 56 nautical miles southwest of... 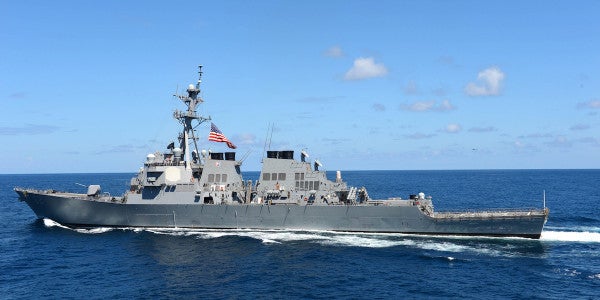 The USS Fitzgerald, a guided-missile destroyer, has collided with a Philippine-flagged merchant vessel ACX Crystal about 56 nautical miles southwest of Yokosuka, Japan, according to a statement from the US Navy's Pacific Fleet.

The crash occured at approximately 2:30 a.m. local time, and the US Navy reports that Japan's coast guard is on the scene to assist conducting a medical evacuation of a sailor via helicopter.

According to Japan's NHK news network, seven sailors were missing after the collision.

The US Navy also said that the ship suffered damage on starboard side, above and below the waterline, and that it had begun to take on water. The commanding officer was reportedly incapacitated and the executive officer is in command, according to Navy Times.

The Fitzgerald is reportedly able to sustain itself using its own power; however, is “limited” in movement. Two US Navy tugs were also dispatched to provide assistance.

“As more information is learned, we will be sure to share to it with the Fitzgerald families and when appropriate the public,” a statement from Adm. John Richardson read. “All of our thoughts and prayers are with the Fitzgerald crew and their families.”

The Fitzgerald had recently made a port call to the US Navy's Subic Bay base in the Philippines and conducted patrols in the South China Sea.

The Fitzgerald maintains constant contact with Japan as it is forward-based in Yokosuka.

Here is aerial footage of the damage: