Almost three years to the day after that fatal collision and two years after repairs began, the USS Fitzgerald departed Ingalls Shipbuilding Saturday fully repaired and ready to rejoin the fleet 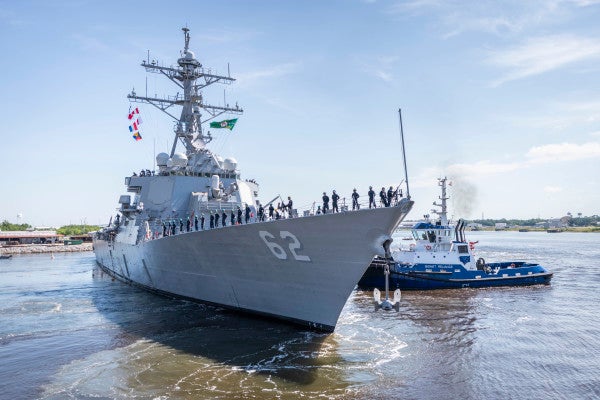 PASCAGOULA, Mississippi — It was about 1:30 a.m. on June 17, 2017, when the U.S. Navy guided missile destroyer USS Fitzgerald collided with a Philippine cargo ship off the coast of Japan.

The crash crushed a large section of the Fitzgerald above the waterline and caused extensive damage below, creating a 13×17 foot hole in the ship. The collision claimed the life of seven of the destroyer’s crew and injured several others.

Now, almost three years to the day after that fatal collision and two years after repairs began, the Fitzgerald departed Ingalls Shipbuilding Saturday, fully repaired and ready to rejoin the fleet.

“It has been our privilege to work with the U.S. Navy to repair and restore Fitzgerald,” said Ingalls president Brian Cuccias. “We our proud of our shipbuilders’ hard work and pleased this capable warship rejoin the Navy’s fleet.”

Following the 2017 collision, the Navy awarded Ingalls a $270 million contract for repair and modernization of the Fitzgerald (DDG 62). At the time, the Navy said in a statement it was determined only an Arleigh Burke-class destroyer shipbuilder could complete the repairs and that Ingalls alone had the capacity and ability to “restore USS Fitzgerald to full operational status in the shortest period of time with minimal disruption to ongoing repair and new construction work.”

The destroyer was brought from Yokosuka, Japan, to Ingalls via a heavy lift transport, arriving at Ingalls in January 2018. After more than a year in drydock, Fitzgerald was relaunched in April 2019.

Ingalls officials said that, due to the complexity of the repair and modernization, both repair and new construction procedures were used to return the Fitzgerald to full operational status.

The U.S. Navy's investigation into the crash found that inadequate leadership and flawed teamwork were factors in the accident. The report also indicated poor seamanship by the crews of both vessels. However, the Navy did praise the actions of the crew after the collision.

The fallout from the accident resulted in the Fitzgerald’s captain and two other senior officers being relieved of duty, along with several other junior officers.