A "rape list" was shared by members of the guided-missile submarine Florida's Gold crew, where investigators found "lewd and sexist comments and jokes were tolerated, and trust up and down the chain of command was nonexistent." 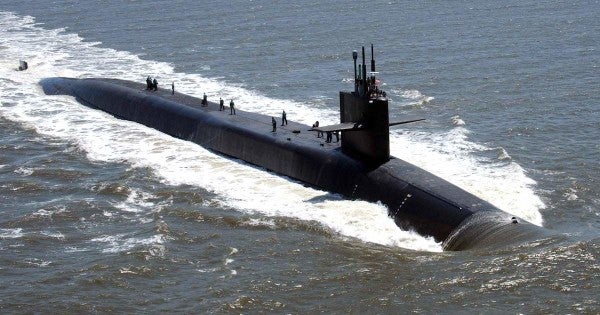 Navy leaders failed to address sailors' safety concerns after a sexually explicit list targeting female crew members surfaced aboard the service's second submarine to integrate women, resulting in the firing of a commanding officer and several other punishments.

A “rape list” was shared by members of the guided-missile submarine Florida's Gold crew, where investigators found “lewd and sexist comments and jokes were tolerated, and trust up and down the chain of command was nonexistent.” That's according to a 74-page investigation into the misconduct, obtained exclusively by Military.com through a Freedom of Information Act request.

The Florida, homeported in Kings Bay, Georgia, was the second submarine to integrate enlisted women in February 2018. Capt. Gregory Kercher, who became the Florida Gold crew's commanding officer five months prior,was fired in August for a loss of confidence in his ability to lead.

At least two sailors assigned to the submarine have been separated from the military, and an undisclosed number faced administrative punishment in connection to the list, Navy officials said.

On June 16, 2018, Kercher's senior enlisted adviser alerted him about two lists discovered aboard the sub. One ranked the female crewmembers using a star system. A second, which included sexually explicit comments next to each name, corresponded to those rankings, according to the investigation.

“Rumors of a 'rape list' were promulgated throughout the crew, significant numbers of females became concerned for their safety, and male members who learned of the list were equally repulsed,” Rear Adm. Jeff Jablon, then-commander of Submarine Group 10, wrote to his superior days before Kercher's relief. “Very few knew what limited action was being taken by the .”

Kercher directed a search of the sub's network to locate the list and identify those accessing it, the investigation states, but stopped short of opening a formal investigation and failed to notify his command.

“Although he took some action in response to the list, there is no question that those minimal actions fell far short of expected standards and norms for an event of this magnitude,” Jablon wrote. Reached for comment, Kercher did not provide a statement about the investigation or his relief to Military.com by press time.

The investigation raises troubling questions about the submarine community's ability to treat female colleagues with respect nearly a decade after the Navy lifted its ban on women serving aboard the vessels. The sexually explicit list follows a 2014 scandal involving female officers and midshipmen on another submarine over a 10-month period being recorded while they undressed.

After a thorough review of the force, the top admiral overseeing all submarine personnel insists he's confident the situation aboard the Florida was an isolated event, and “not at all reflective of the overall outstanding performance and behavior of our submariners force-wide.”

“While I cannot guarantee that an incident such as this will never happen again, I can guarantee that we will continue to enforce our high standards of conduct and character in the Force,” Vice Adm. Chas Richard, commander of U.S. Submarine Forces, said in a statement provided to Military.com. “I expect every submariner to treat one another with dignity and respect, and will hold our personnel accountable if they fall short of our standard.”

Women joined the Florida starting about five months after Kercher took command of the Gold crew. Navy subs each have two crews: a gold and a blue, which alternate manning the boats.

There were 32 women on the Florida's Gold 173-person crew, including five officers, two chief petty officers and 25 sailors at the rank of E-6 and below.

On June 3, 2018, a sailor aboard the Florida printed the first list with the names of every female Gold crewmember when the sub was at Naval Support Facility Diego Garcia in the Indian Ocean. The sailor gave the list to a female petty officer the following day. It included between one and four asterisks next to every woman's name.

About 10 days later, that same sailor printed the second list and again gave it to the same female petty officer. The sailor told her the lists were housed on the submarine's computer network, where they were updated every few weeks. Male crewmembers were going to vote again on them soon, the sailor told the petty officer.

“The sexually explicit list describes various USS Florida females by appearances, characteristics and various sexual acts the creators of the list wish to perform with them,” the investigation states. “The list describes aggressive sexual activity, but does not reference non-consensual acts.”

The petty officer took photos of the lists before she and a second petty officer took them to a male chief on June 16. That chief took the lists to the sexual-assault prevention and response point person, who referred them to the command's equal opportunity manager. Kercher's senior enlisted adviser was also notified about the lists.

The adviser, the chief of the boat, “took it straight to the CO,” according to the investigation. But Kercher declined to open an investigation because “they only had a piece of paper,” the report states.

“CO believed he needed to determine where it was generated and who generated the list before assigning an investigating officer,” investigators wrote.

At that point, the chief of the boat told investigators he was cut out of further talks about the lists. He was not present when Kercher discussed the list with sailors and suspects, he told investigators. At one point, Kercher told him to “slow down” because he was getting too involved, the investigation states.

A search of the submarine's network failed to locate the lists on the drives. Kercher even Googled ways to search a network so he could find the lists himself, the report states.

The Naval Criminal Investigative Service got involved but, after a “thorough forensic search of the submarine's computer networks and drives,” they too were unable to locate the lists, said Cmdr. Sarah Self-Kyler, a spokeswoman for U.S. Submarine Forces.

As time passed, rumors ran rampant aboard the sub, but Kercher did not communicate what he was doing to find those responsible.

“Junior sailors do not feel safe knowing that the command has done 'nothing' to try to actively find out who has written or added to the list,” the report states. At least one woman told investigators she thought the command 'had forgotten about the list a long time ago.'”

One woman told investigators the lists made “her question all males on the boat,” despite wanting to trust her shipmates.

The female petty officer who was first given a copy of the lists began sending pictures of them to her boyfriend and family back home, the report states. She also sent a copy to a senior chief back at the Florida's homeport.

“[She] sent pictures off hull because she did not trust the upper chain of command to do the right thing and strongly believed that they were trying to 'sweep it under the rug,'” the report states.

'Breach of trust and confidence'

It was for that inaction over almost two months — along with failing to address other command climate concerns — that Kercher was removed from his post as Florida Gold's commanding officer.

“Only after being formally approached by a female petty officer … several weeks after the discovery of the list, did Capt. Kercher recognize that additional actions were warranted,” Jablon, Kercher's former group commander, wrote in his letter recommending the relief.

Commanding officers are held to high standards of responsibility, reliability and leadership, Self-Kyler said, adding that the Navy holds them accountable if they fall short.

Aside from Kercher, the investigation found two enlisted sailors had displayed inappropriate conduct, she said.

“These sailors were administratively discharged from the Navy,” Self-Kyler said. “Additional administrative actions were taken against other members of the command for their mishandling of the report.”

At one point, some of the women concerned about the lists were told to “suck it up and not add to the drama,” according to the investigation. That person turned out to be a divisional-level leader, Self-Kyler said.

Ultimately, any sailor who falls short of treating their shipmates with the utmost dignity and respect, regardless of gender, will pay the price, said Richard, the vice admiral in charge of Submarine Forces.

“Once notified, our Force leadership responded quickly, investigated, and held those responsible fully accountable for their actions,” he said.

The investigation into the “rape list” and other concerns about the command's workload and morale took place while the Florida was stopped at Diego Garcia and underway in the Indian Ocean.

The lists weren't the only problem aboard the Florida. In August 2017, about a month before Kercher took command, an anonymous inspector general complaint was filed about long working hours, lack of sleep and crew stress. The crew was working six-day weeks, and one person told investigators “sailors would rather pay to stay in hotels to avoid tasking on their evening time.”

“If you were spotted on board by anyone senior on Sunday, you would be tasked with additional work,” the investigators wrote.

It was about a year later when the inspector general was hit with a second complaint about the lists referencing female crewmembers.

All incoming commanding officers have 90 days to complete a command climate assessment, Self-Kyler said. Throughout their tenure, they must do follow-up assessments every nine to 12 months.

“Commanders must conduct a face-to-face debrief of their command climate assessment executive summary, to include a plan of action, with their immediate supervisor within 30 days of receiving the results,” she said.

Seven months into Kercher's time with Florida's Gold crew revealed the same command climate problems as when he began, the investigation states. Jablon said that not only led to subpar operational performance, but likely the lists targeting women too.

After the turnover in leadership, the Navy provided “external assistance to the command to address the culture on board,” said Capt. Chris Nash, commodore of Submarine Squadron 16, who was Kercher's immediate supervisor in command. That led to an audit of the command's sexual-assault prevention and response plan and equal opportunity programs, he said.

The crew's most recent command climate survey was completed in February, and it showed improvements, he added. A follow-on Submarine Culture Workshop will be held in June 2019, and the command will continue to monitor command climate.

The Florida Gold crew recently returned from a deployment, during which it supported two combatant commands over a four-month period.

“I am proud of this crew and the progress that they made in the months following this event,” Nash said.