A viral mumps outbreak that left a deployed U.S. Navy warship quarantined at sea for five months is finally under control 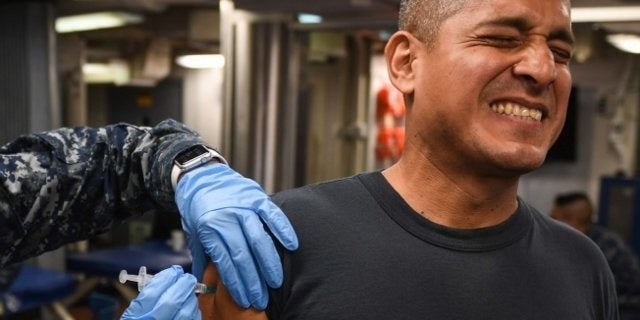 A viral mumps outbreak that left a deployed U.S. Navy warship quarantined at sea for five months is finally under control.

U.S. military personnel aboard the USS Fort McHenry, a Whidbey Island-class dock landing ship carrying Marines with the 22nd Marine Expeditionary Unit, began falling ill and were diagnosed with viral parotitis shortly after the ship departed Mayport Naval Station in Florida in mid-December. The Navy later clarified that affected personnel appeared to be suffering from a probable case of the mumps.

By early April, the number of affected service members had risen to 28, roughly 4% of the 703 people on board.

Outbreaks of influenza and other common illnesses occur every year aboard Navy vessels, but this situation was a bit different as U.S. troops are vaccinated against the mumps.

“It is not common for us to see outbreaks of vaccine-preventable viral infections,” the Navy's Bureau of Medicine and Surgery previously told BI, adding that while “vaccines are effective at reducing the incidence and severity of vaccine-preventable diseases,” the mumps portion of the measles, mumps, and rubella (MMR) vaccine is only 88% effective, suggesting that a vaccinated person could still be infected.

The USS Fort McHenry was quarantined during viral outbreak. It has gone 112 days without a port call, which is exceptionally rare as port visits typically occur every month or so. The record was set by the Nimitz-class aircraft carrier USS Theodore Roosevelt in 2002 when it spent 160 days at sea due to war-time operations.

The USS Fort McHenry's last port visit was to Constanta, Romania, where it stayed for four days before departing on January 10.

The situation aboard the ship has improved, and the quarantine is over. “All have made a full recovery and returned to duty.” U.S. Fifth Fleet told Business Insider. “The ship has resumed movement of personnel on and off the ship.”

The ship has not yet made a port call, though.

When the virus first began to spread, sick service members were quarantined aboard the vessel and treated in the onboard medical facilities while their living areas were cleaned and disinfected.

The Navy also sent medical professionals out to the ship to provide additional support, and to be on the safe side, the personnel aboard the ship were given a MMR booster for added protection.

While the quarantine has ended, Fifth Fleet continues to exercise caution. Military “personnel departing the ship must pass a rigorous pre-transfer medical screening process established to mitigate/prevent spreading the illness,” a spokesperson for the fleet told BI.

The last active mumps case was April 2. The incubation period for the mumps is 25 days. A situation like this cannot be considered fully resolved until two full incubation periods have passed without incident. “This ensures that the virus is no longer spreading, as infected individuals sometimes show no symptoms of illness,” BUMED previously explained.

WATCH NEXT: That Time U.S. Troops Drank All The Beer In Iceland's Capital