The Navy’s Newest, Most Sophisticated Aircraft Carrier Doesn’t Have Urinals

Amid all its upgrades and advances, the Navy’s newest aircraft carrier, the USS Gerald R. Ford, is lacking one feature:... 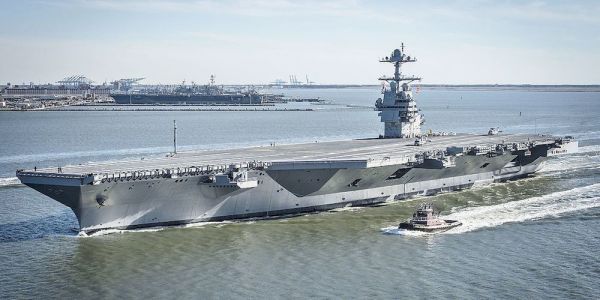 Amid all its upgrades and advances, the Navy’s newest aircraft carrier, the USS Gerald R. Ford, is lacking one feature: urinals.

Every bathroom on the Ford is, for the first time, gender-neutral, equipped with flush toilets and stalls, according to Navy Times.

Bathroom-design experts have said sit-down toilets are less sanitary and take up more space, and most of the Ford’s crew members are men. (Women are only about 18% of the Navy.)

But the Navy has said getting rid of urinals has advantages for current and future operations.

Making every bathroom accessible to all of the ship’s sailors will also make things more convenient for sailors, the Navy has said. And bathrooms that can be used by either gender mean the Navy can reassign them without making any design changes, should the crew’s make-up change.

“This is designed to give the ship flexibility because there aren’t any berthing areas that are dedicated to one sex or the other,” Operations Specialist 1st Class Kaylea Motsenbocker told Navy Times. “So if this space was needed for males, we could shift the females to other berthing areas and make this all male without any modification being necessary.”

Sailors man the rails during the commissioning ceremony of USS Gerald R. Ford (CVN 78) at Naval Station Norfolk.Photo via DoD

Other changes include redesigned sleeping areas with fewer beds in each room, different spaces for sleeping and recreation, wider passageways, better gyms, better air conditioning, and more efficient light bulbs. USB ports have been installed to make it easier for sailors to charge cellphones and other devices.

Beyond the bathrooms, the Ford — which is the first Ford-class aircraft carrier — has 23 new or modified technologies.

The ship’s island is smaller and farther back on the flight deck, allowing more space for air operations. Inside, the traditional throttle system has been switched out for an updated, one-of-a-kind touch-screen display. “This ship can basically drive itself,” Petty Officer 1st Class Jose Triana told CNN.

In addition to carrying more aircraft, the Ford will also use the Electromagnetic Aircraft Launch System rather than the steam power used on Nimitz-class ships. The EMALS system is designed to offer more control and precision when launching aircraft and will be used despite President Donald Trump’s vocal objection earlier this year.

The EMALS system is also part of the Ford’s switch to electrical power. The ship will be able to produce three times as much power as Nimitz-class ships, and the Navy has said replacing steam-powered systems with electrical ones will open space for future technologies.

Flight operations will also use the Advanced Arresting Gear system to recover aircraft. The AAG system will allow Ford-class ships to work with air systems that Nimitz-class ships are not interoperable with.

The Ford’s roughly 40 fuel stations are more than on any Nimitz-class ship, and allow for fueling from multiple places on the ship with less personnel. The ship’s dual-band radar works on two frequencies at the same time. It can pick up low-altitude objects and track both incoming and outgoing aircraft and weapons.

Ford-class carriers will also use electromagnetic fields to raise and lower platforms instead of cables, saving space and reducing maintenance and personnel requirements over time.

All these advances and upgrades have presented challenges to the Navy and to the sailors who will man the Ford. The ship’s first crew members have more or less written the book on how to operate it.

“We’re creating guidelines,” Triana told the Associated Press this month. “We’re creating operational — basically instructions — on how to operate this ship with its systems and its new design.”

Sailors man the flight deck and bring the ship to life during the commissioning ceremony of USS Gerald R. Ford (CVN 78) at Naval Station Norfolk.Photo via DoD

“We have, no doubt, without question, subject-matter experts on these new systems,” Capt. Brent Gaut, the Ford’s executive officer, told the AP. “They’ve been training on them for upwards of two, three years now. There’s no one else in the fleet that has some of the systems we have. They are the go-to personnel on how to operate and how to execute with the new systems that we have.”

The new and updated technology poured into the Ford has caused trouble for the Navy during the ship’s construction and development.

“With the benefit of hindsight, it was clearly premature to include so many unproven technologies” in the Ford, according to an August 23 memo to Navy Secretary Ray Mabus. The Ford’s new dual-band radar and some components of its new, more powerful nuclear reactor also encountered problems during the ship’s development.

While the Ford is now ready to ply the seas, Navy commanders appear to be cautious about repeating the technological leaps taken with the ship. In addition to problems with the launching and arresting systems, the $12.9 billion warship also experienced budget overruns and scheduling delays.

While the Ford passed builder’s trials this spring, it did not undergoshock trials — where the Navy detonates explosives near the ship to test its ability to withstand the strain. The Navy’s first-in-class ships don’t always face shock trials, however, and the next ship in the class, the USS John F. Kennedy, will do them.

“When we look back, the Ford took on some major goals for ourselves, some real reach goals in terms of technology. And so as we look forward to designing and building ships of the future, particularly given how quickly technology is advancing, maybe we take smaller steps,” Adm. John Richardson, the Navy’s chief of naval operations, told USNI News prior to the Ford’s commissioning this weekend.

“With all new technology there are risks,” Capt. Richard McCormack, the Ford’s commanding officer, said. “But that’s why we’re here — to go out there and shake them down.”