The Navy on Tuesday fired the skipper of the guided-missile destroyer USS Hopper following allegations that he fraternized with a... 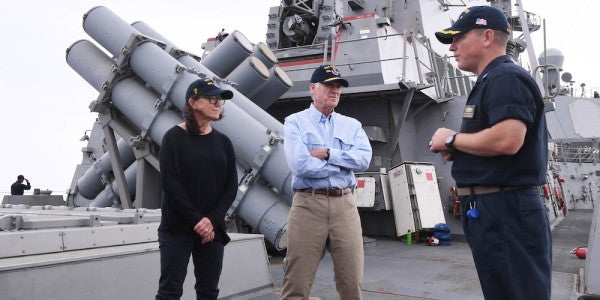 The Navy on Tuesday fired the skipper of the guided-missile destroyer USS Hopper following allegations that he fraternized with a junior sailor.

The military outlaws unduly close relationships between enlisted and commissioned ranks and will prosecute them if they threaten to destroy unit cohesion, are tied to other crimes or bring the service into disrepute.

Russell said that Fort named Capt. Joseph Ring, the deputy commodore of Destroyer Squadron 31 in Hawaii, to replace Tamulevich until a permanent replacement can be named.

Tamulevich has been reassigned to the staff of Navy Region Hawaii. He did not return telephone and email messages from The San Diego Union-Tribune on Wednesday.

In 2009, Tamulevich received the highly prestigious Surface Warfare Officer of the Year award for his distinguished service as the combat systems officer aboard the destroyer John Paul Jones.

A 1999 graduate of the U.S. Naval Academy, where he studied oceanography, Tamulevich also served aboard the destroyer Gonzalez and the carrier Theodore Roosevelt.

Tamulevich in 2005 reported to the U.S. Naval Academy, where he earned his Masters of Science in Human Resources and Leadership from the Naval Postgraduate School. He became the 16th Company Officer at the Naval Academy and in 2007 embarked aboard the John Paul Jones.

Ashore, he was appointed deputy executive assistant in naval operations and served as the operations officer for Iraq, Syria, Jordan and U.S. Central Command Maritime.

The executive officer aboard the Hopper between March 2016 and July 2017, he then “fleeted up” to take command of the destroyer.

As skipper of the Arleigh Burke-class Hopper while it patrolled the Persian Gulf, Tamulevich entertained Navy Secretary Richard V. Spencer and his wife, Sarah Pauline Spencer, on Thanksgiving.

Tamulevich’s temporarily replacement, Capt. Ring, is a native of San Diego who has served aboard the cruisers Lake Champlain and Mobile Bay and the destroyer Carney. He also commanded the Japan-based destroyer Mustin.