The wreckage of the World War II-era USS Hornet that launched long-range bombers against Japan during the Doolittle Raid was found late last month in the South Pacific, researchers announced Tuesday 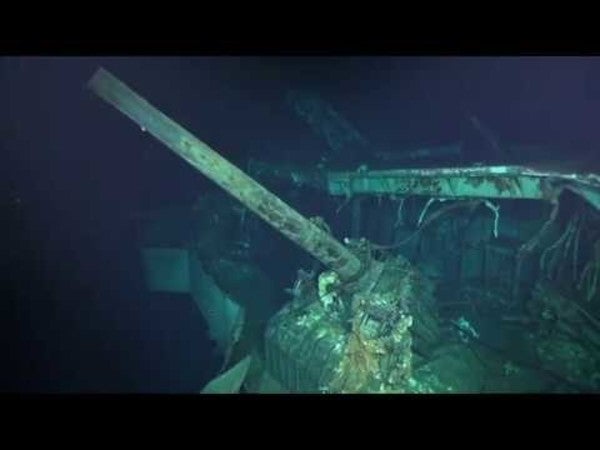 The wreckage of the World War II-era USS Hornet that launched long-range bombers against Japan during the Doolittle Raid was found late last month in the South Pacific, researchers announced Tuesday.

The aircraft carrier was discovered near the Solomon Islands more than 17,000 feet beneath the surface by researchers for an organization founded by billionaire philanthropist Paul Allen, who co-founded Microsoft and died last year. The carrier was sunk during the Battle of Santa Cruz in 1942, where 140 Hornet crew members died in a coordinated attack by Japanese aircraft and destroyers that proved to be a critical part of the war.

“With the loss of Hornet and serious damage to Enterprise, the Battle of Santa Cruz was a Japanese victory, but at an extremely high cost,” retired Rear Admiral Samuel Cox, director of Naval History and Heritage Command, said in a statement. “About half the Japanese aircraft engaged were shot down by greatly improved U.S. Navy anti-aircraft defenses. As a result, the Japanese carriers did not engage again in battle for almost another two years.”

The sinking ended a brief but momentous naval career for the carrier that included action during the Battle of Midway as well as the first attack on Japanese home islands made famous by its leader, Army Lt. Col. James H. Doolittle.

“We had the Hornet on our list of WWII warships that we wanted to locate because of its place in history as a capitol carrier that saw many pivotal moments in naval battles,” said Robert Kraft, director of subsea operations for the Vulcan organization. “Paul Allen was particularly interested in aircraft carriers so this was a discovery that honors his memory.”

The Hornet was built in Newport News and briefly stationed in Norfolk, where it was commissioned in 1941.

Following the Japanese attack on Pearl Harbor, the Navy tested out the possibility of launching bombers from the Hornet off the coast of Virginia, according to the Naval History and Heritage Command. The Navy found that bombers could take off — but not easily land — at sea.

The researchers said in a statement that they were able to find the Hornet by using data from national and naval archives that included deck logs and action reports from other ships that were there during the Battle of Santa Cruz.

The Vulcan organization used an autonomous underwater vehicle launched from the research vessel Petrel to discover the Hornet, which was confirmed with video taken by the vehicle.

SEE ALSO: The Wreckage Of One Of America's Most Storied World War II Aircraft Carriers Was Just Discovered

WATCH NEXT: Discovering The USS Lexington