74 years after its namesake’s infamous sinking, the USS Indianapolis is ready for service

Only 317 of the USS Indianapolis's 1,196 sailors survived after five days afloat in the Pacific. Some died from dehydration; others were killed by sharks. It was the biggest loss of life in the Navy's history 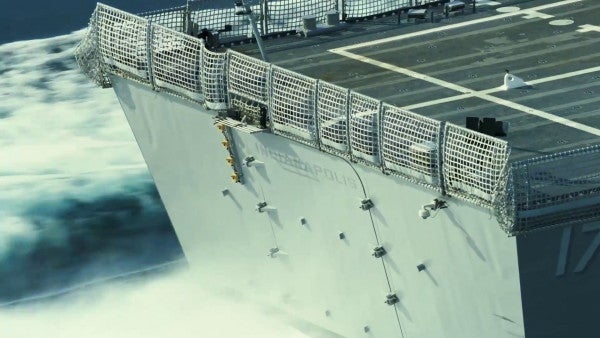 Some 74 years ago, Richard Thelen, a then-18-year-old gunner's mate on the cruiser Indianapolis, vaulted into the air when a Japanese tornado sank the ship on July 30, 1945.

“I remember mostly how quickly it sunk. I had to stay alive out there. Every time I was ready to give up, I felt my dad's grip, and saw his face,” said Thelen.

Only 317 of the ship's 1,196 sailors survived after five days afloat in the Pacific. Some died from dehydration; others were killed by sharks. It was the biggest loss of life in the Navy's history.

Now, a new Indianapolis is ready for service.

The first Indianapolis was a steamer commissioned directly into the Navy in 1918 and it made two runs to Europe during World War I.

Standing with a walker on the future Indianapolis on Thursday, Thelen, 92, of Lansing, Mich., recounted the horror of spending five days in the Pacific in shark-infested waters.

Thelen is one of a handful of survivors who remain from the World War II cruiser, which earned 10 battle stars.

The ship sank just four days after delivering components of the nuclear bomb “Little Boy” that was dropped on Hiroshima Aug. 6, 1945.

Its captain, Charles B. McVay III, survived but was court-martialed soon after the war. Authorities said he was guilty of endangering his vessel by failing to steer a zigzag course to avoid torpedoes. The tragedy haunted McVay and he killed himself in 1968. In 2000, President Bill Clinton signed a bill exonerating McVay.

Thelen thinks he survived because he was saturated with diesel fuel and he didn't think sharks liked the smell. “I saw one man taken by a shark 15 feet away. I felt one bumping my legs and my life jacket.”

Thelen was joined by another sailor, Jim Jarvis, of Zanesville, Ohio, who served as a 3rd class aviation metal smith. The two men enjoyed lunch and shared stories with sailors and the USS Indianapolis's new commander Colin Kane, a Columbus, Ohio native.

Kane said the newest 388-foot Indianapolis arrived in Burns Harbor from a shipyard in Marinette, Wis. Its lower level contains steel plate made at the nearby Arcelor Mittal plant in Burns Harbor.

Kane said it's powered by two gas turbines, two main propulsion diesel engines and four waterjets, similar to jet skis. It can reach speeds of up to 40 knots.

Kane will command a crew of 70 officers and enlisted sailors. Kane described the ship as a new generation of fast, agile combat ships. It's equipped with a platform designed to hunt and neutralize mines.

About 20 crew members will be dedicated to mine warfare operations, others will focus on helicopters for aviation operations, Kane said.

The ship contains reminders of its namesake with the Indianapolis skyline across a wall in the well deck. There's also a drawing of checkered flags from the Indy 500.

Kane said the ship would probably leave Burns Harbor on Monday and head to Naval Station Mayport, near Jacksonville, Fla., where it will remain for about a year before deploying.

The ship's motto, “Legacy of War,” serves as a reminder of the predecessors that share its name.

“It's a fantastic legacy,” said Kane. “It brings home what the reality of the namesake is. We can't forget our past.”

Saturday's ceremony will be live-streamed at:
https://allhands.navymil/LIve-Stream.