A research team funded by billionaire Paul Allen has found the wreckage of the storied World War II aircraft carrier... 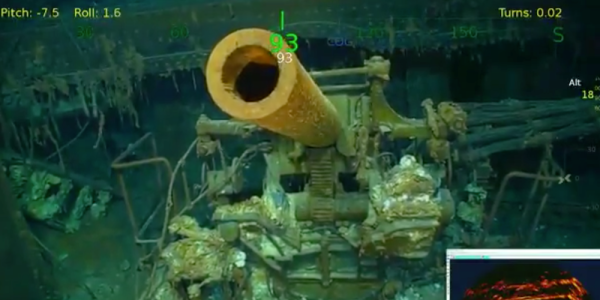 A research team funded by billionaire Paul Allen has found the wreckage of the storied World War II aircraft carrier USS Lexington, which was sunk during the Battle of the Coral Sea. The crew of the Research Vessel Petrel found Lexingtonat a depth of 3,000 meters resting on the floor of the Coral Sea more than 500 miles off the eastern coast of Australia.

“Lexington was on our priority list because she was one of the capital ships that was lost during WWII,” said Robert Kraft, Allen’s director of subsea operations. “Based on geography, time of year and other factors, I work with Paul Allen to determine what missions to pursue. We’ve been planning to locate the Lexingtonfor about six months and it came together nicely.”

Originally built as a battlecruiser, Lexington was later converted into one of the U.S. Navy’s first aircraft carriers to comply with the Washington Naval Treaty of the interwar years. Together with USS Yorktown, Lexington led a task force of nine cruisers and thirteen destroyers against a larger Japanese force consisting of three carriers, nine cruisers, and fifteen destroyers during the battle, which took place May 4–8, 1942. While the Coral Sea was a strategic victory for the allies, Lexingtonwas so badly damaged, she had to be scuttled to prevent her from falling into Japanese hands.

“As the son of a survivor of the USS Lexington, I offer my congratulations to Paul Allen and the expedition crew of Research Vessel (R/V) Petrel for locating the ‘Lady Lex,’ sunk nearly 76 years ago at the Battle of Coral Sea,” Adm. Harry B. Harris, USN, Commander, United States Pacific Command, said in a statement. “We honor the valor and sacrifice of the ‘Lady Lex's’ sailors—all those Americans who fought in World War II—by continuing to secure the freedoms they won for all of us.”

Paul Allen also paid tribute to Lexington and her crew. “To pay tribute to the USS Lexington and the brave men that served on her is an honor,” said Paul Allen. “As Americans, all of us owe a debt of gratitude to everyone who served and who continue to serve our country for their courage, persistence, and sacrifice.”

“Our Navy's strength comes from those who have gone before. This is our heritage. Our Navy's strength comes from those who serve now. This is who we are,” Harris said. “No one should doubt that today's warriors are ready to fight tonight and win. We help secure the peace in the Indo-Pacific today alongside our allies and partners, including Australia, where I am currently visiting to meet with my counterparts and reinforce our amazing alliance. I'll visit the Australian War Memorial to honor those Australians who also paid the ultimate sacrifice in defending freedom across the globe. Alongside our allies, friends, and partners, bound together by shared values, the United States is committed to maintaining a free and open Indo-Pacific, which has brought security and economic prosperity to all who live in this critical region.”