The Navy’s Newest Warship Is Still Stranded In Canada

While the USS Little Rock, a newly commissioned littoral combat ship, remains stuck in the ice in Montreal, a Marinette... 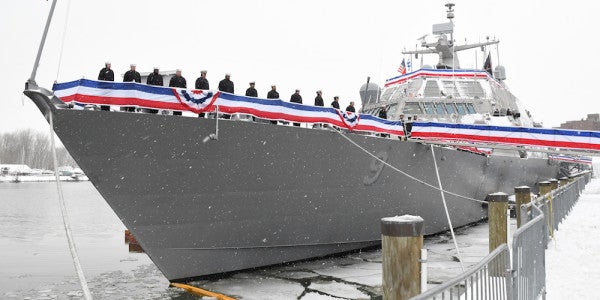 While the USS Little Rock, a newly commissioned littoral combat ship, remains stuck in the ice in Montreal, a Marinette shipyard is helping the vessel get through the winter.

The 389-foot U.S. Navy warship has been iced-in on the St. Lawrence Seaway since late December and is not expected to get moving until spring.

It's an unplanned winter layover for the $400 million ship built at the Fincantieri-Marinette Marine shipyard and delivered to the Navy last fall.

After being commissioned in Buffalo, N.Y., on Dec. 16, the USS Little Rock arrived in Montreal on Dec. 27. It was supposed to stop for a brief visit before sailing on to Mayport Naval Station in Mayport, Fla., where it would join littoral combat ships the USS Milwaukee and the USS Detroit.

Winter was already settling in and ice was forming on the seaway, but the Navy thought it still had enough time to get through the passageway to the Atlantic before it froze over.

Then temperatures dropped to near-record lows, which thickened the ice and prevented the USS Little Rock from departing the Port of Montreal.

“Keeping the ship in Montreal until waterways are clear ensures the safety of the ship and crew,” said Lt. Cmdr. Courtney Hillson.

How long could that be? Historically, ice in the St. Lawrence doesn’t melt enough for ships to travel again until mid-March, according to the Navy.

The USS Little Rock and its crew of about 70 sailors are hunkering down in Montreal for the rest of the winter, while Marinette Marine personnel assist in winterizing the ship for its icy berth.

The Navy is implementing the shipyard’s recommended cold-weather care and protection plan, Hillson said, which includes installing temporary heaters and 16 de-icing machines to keep water moving around the hull and reduce the effects of ice accumulation.

Also, the crew has been given additional cold weather gear.

“While in port, the crew of Little Rock will continue to focus on training, readiness and certifications,” Hillson said, in areas such as medical assistance, damage control, navigation and security.

By now, the ship should have arrived at its home port in Florida.

The USS Little Rock remains undamaged, according to the Navy, although the ship has undergone some minor repairs — unrelated to the ice — since it left Marinette.

“When the ice clears, we will be ready to go,” Hillson said.

Little Rock was to have left Buffalo earlier, but the departure was delayed a few days because of poor weather on Lake Erie.

Former Navy Secretary Ray Maybus, who visited the Marinette shipyard during construction of littoral combat ships, made the decision to have the USS Little Rock commissioned in Buffalo, which has some of the coldest winters in the United States.

The Navy wasn’t aware that temperatures in Montreal would drop so much, so fast, according to Hillson, adding that ships in previous years have made it through the St. Lawrence Seaway in early December.

The commissioning took place at the Buffalo and Erie County Naval & Military Park, adjacent to the old USS Little Rock, which is docked there as a museum ship.

It was the first time in the U.S. Navy’s history that a new ship was commissioned alongside its namesake, according to the Buffalo and Erie County Naval & Military Park.

More of the warships are in various stages of construction in Marinette, while a different version is being built in Mobile, Ala.

The work, which has supported thousands of jobs in Wisconsin, is expected to last through at least 2021.

The fast vessels, powered by jet propulsion, are aimed at a variety of missions from maritime interception to humanitarian assistance.

But the fleet, which includes the USS Milwaukee, has come under scrutiny for cost overruns and mechanical breakdowns.