The guided-missile submarine USS Michigan made a port call in the southeastern port city of Busan on Tuesday, a show... 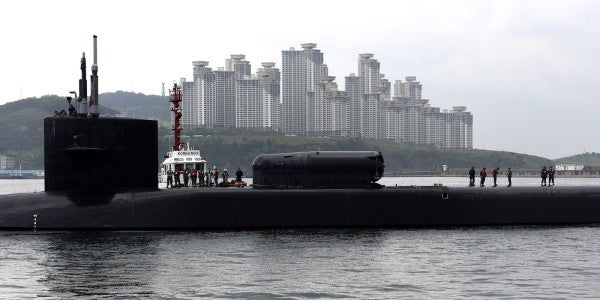 The guided-missile submarine USS Michigan made a port call in the southeastern port city of Busan on Tuesday, a show of force as North Korea celebrated the 85th anniversary of the founding of its army.

The U.S. and South Korean navies also sent destroyers to conduct a joint live-fire exercise with destroyers in the Yellow Sea off the peninsula’s west coast on Tuesday.

The Ohio-class, nuclear-powered submarine sailed into Busan for what the Navy said was a routine visit during a regularly scheduled deployment to the western Pacific.

North Korea strongly objects to the deployment of such strategic assets to the divided peninsula. It has threatened to sink a U.S. aircraft carrier heading to the region, as tensions mount over the North’s nuclear weapons program.

The timing of the port visit also was significant as North Korea marked army foundation day, one of its biggest holidays, on Tuesday. Pyongyang frequently conducts nuclear and missile tests in the days surrounding high-profile events, several of which occur in April.

Asked if he had a message for North Korea on Tuesday, Gen. Vincent Brooks, the commander of U.S. forces in South Korea, said his troops stand ready to fight.

“We’re ready, and we are committed to the (South Korea)-U.S. alliance,” he said in brief remarks to reporters after a ceremony at the Army’s Yongsan U.S. Army garrison in Seoul.

USS Michigan, one of the largest submarines in the world, is more than 560 feet long and weighs more than 18,000 tons when submerged, according to the Navy. It’s equipped to carry as many as 154 Tomahawk missiles and more than 60 special operations forces.

USS Michigan is one of four Ohio-class submarines that the Navy has converted from carrying nuclear ballistic missiles to conventional guided missiles.Its homeport is Bremerton, Wash., but it is forward deployed from Guam.

Separately, the USS Wayne E. Meyer, a guided missile destroyer that is part of the Carl Vinson strike group, and South Korea’s Wanggeon were scheduled to stage a combined tactical operation and live-fire drill on Tuesday, South Korea’s navy said in a statement.

The allies also planned to hold another major joint naval practice involving the USS Carl Vinson aircraft carrier in the sea off the peninsula’s east coast near the end of the month, the navy said.

“The joint exercise is to show U.S. and South Korea’s strong will to retaliate and its firm defense posture against North Korea’s provocative threat,” it added.