The USS New York's nose is made from steel salvaged from the wreckage of the World Trade Center. 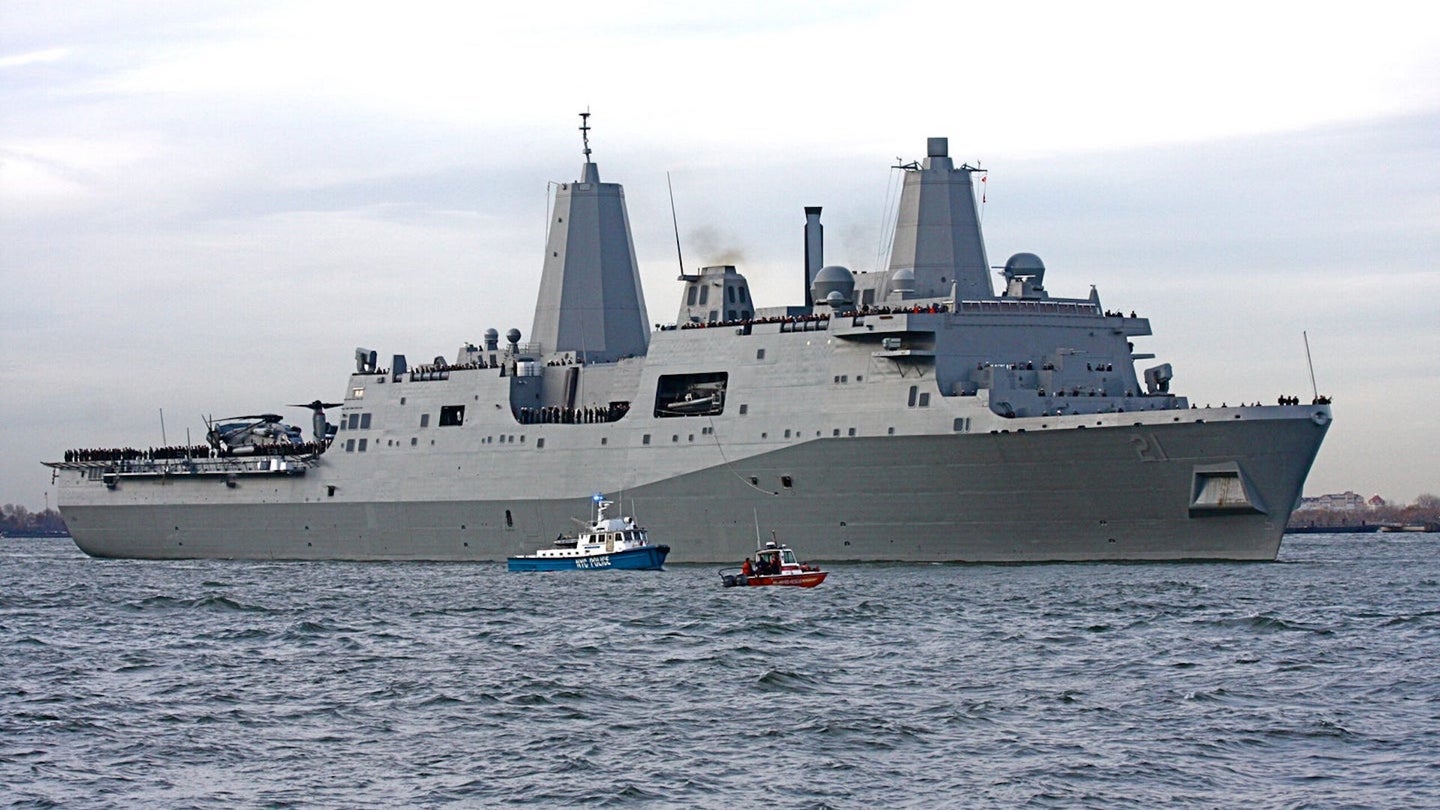 Editor’s note: This article was originally published in September 2018.

Sailors aboard the USS New York pay their respects every year to those who died in the terror attacks of Sept. 11, 2001. The plan for Tuesday is to perform the ceremony at Naval Station Mayport, the home base for the San Antonio-class amphibious transport dock.

But this ship carries more than a New York name. Reminders of 9/11 abound. Its very nose is made from steel salvaged from the wreckage of the World Trade Center. And its sailors are taught to never forget their connection to the catastrophe.

“Every ship in the Navy has a namesake room or a legacy room, but on our ship the whole ship is a legacy to what happened,” Command Master Chief Ben Hodges said.

A steel plate recovered from the Trade Center rubble is on display above one of the most-used passageways. A firefighter’s helmet reminds sailors of the first responders who sprung into action.

Hodges said the reminders extend to the ship’s daily prayer ritual, for which the chaplain chooses the name of someone who died in the attacks to honor. It all makes it impossible to forget Sept. 11, he said.

“We talk to all of our sailors when they initially check in and explain to them the significance of what they are a part of,” Hodges said. “You can’t help when you walk around the ship to notice all the things meant to remind you of why you serve.”

Despite all of the reminders found in many corners of the ship, the piece with the greatest significance goes unseen.

The New York’s bow stem — the part at the very front of the ship just below the water’s surface — was forged using steel from one of the twin towers.

The scrap had been located at the Staten Island landfill; and it is believed to have been from the south tower. On Veterans Day 2002, the Intrepid Air-Sea-Space Museum presented it on behalf of the City of New York to Northrop Grumman Ship Systems, according to the Navy.

Navy engineers determined it was possible to use thousands of pounds of the salvaged steel for the bow stem casting, and the molten steel was cast Sept. 9, 2003, at the Amite Foundry and Machine in Amite, La. The steel was treated and about 7.5 tons of it was smelted for the part of the ship that cuts through the water.

Kevin Wensing remembers the day that workers poured the sacred steel into the mold. He was there as a special assistant to then-Secretary of the Navy Gordon England.

A band played as Navy officers and politicians mixed with factory workers who wanted to be a part of the occasion. Wensing said it was one of the most reverent occasions he’s ever been a part of.

“It was a very spiritual, kind of religious thing, in a way, when you are down in Amite, Louisiana, and you think about all the people who suffered on 9/11,” Wensing said.

Wensing said employees had been making it a point to touch pieces of the steel when they came to work each day.

“Everyone involved with the project knew it was something special,” Wensing said.

The secretary of the Navy is in charge of naming all future Navy vessels, so part of Wensing’s job at the time was to read through thousands of letters asking for specific names.

He said the idea to name the ship for New York came just a few days after the attacks. The USS Arlington and USS Somerset were named for the Virginia home of the bomb-damaged Pentagon and the Pennsylvania county where United Flight 93 crashed.

Wensing said the decision to name vessels after the attack locations was easy, but it was much harder to decide what types of ships would get the names.

Submarines are usually the only vessels named for states, Wensing said, but it’s extremely difficult to get civilians on board subs for tours. So because the New York, Arlington and Somerset would be vessels with frequent tour requests, it was imperative that they were surface ships.

There’s another specific reason why they are all San Antonio-class amphibious transport ships. Wensing said the secretary wanted the ships to be vessels that housed both Navy sailors and Marines, so the transport ships made perfect sense.

Although the New York is often toured by civilians, Tuesday’s ceremony is not open to the public, Hodges said.

But he said on the anniversary of the attacks everyone should be reminded of the ship’s motto: “Strength forged through sacrifice. Never forget.”