To help expand its fleet of aircraft carriers, the Navy could purchase two ships at once. That’s on the table... 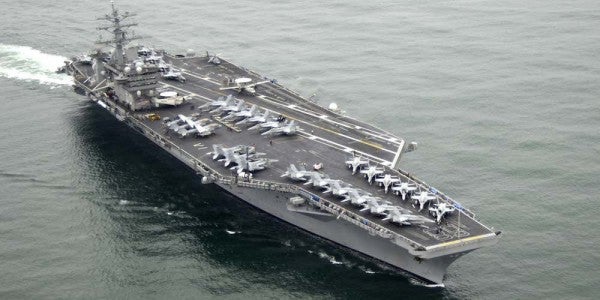 To help expand its fleet of aircraft carriers, the Navy could purchase two ships at once. That’s on the table right now.

It could also coax more life from its oldest carrier. That’s also under consideration, thanks to the House-passed 2019 defense spending blueprint.

A provision in the House’s 2019 National Defense Authorization Act (NDAA) directs the Navy to consider extending the service life of the USS Nimitz, built at Newport News Shipbuilding and commissioned in 1975.

It tells Navy Secretary Richard V. Spencer to brief the House Armed Services Committee no later than March 1, 2019, “on options that exist to extend the service life of USS Nimitz, to include the extension of major components,” according to the bill’s text. “Additionally, such a briefing should include cost estimates and major modernization components.”

The bill doesn’t specify the scope of the work or how many extra years the Nimitz would remain in service.

Depending on the level of complexity, a life-extension could fall to Newport News Shipbuilding, a division of Huntington Ingalls Industries. The shipyard is the sole designer, builder and refueler of nuclear-powered carriers. The Navy’s four public shipyards, including Norfolk Naval Shipyard, can handle more routine maintenance and upgrades of the nuclear fleet.

“I think what you look at are regular types of shorter-term maintenance,” he said.

Why spend any resources on the Navy’s oldest operational carrier? Because the Pentagon is committed to expanding its carrier fleet from 11 to 12 as soon as possible. Keeping the Nimitz active for a few more years helps with that numbers game, as the bill’s text points out.

Last year’s delivery of the USS Gerald R. Ford to the Navy pushed the carrier fleet up to 11. The Navy will reach its 12-carrier goal when the next Ford-class ship, the John F. Kennedy, is delivered in 2023. But it will quickly drop back to 11 that same year, when the Nimitz is scheduled to be retired, according to the text.

Keeping the Nimitz around a few more years prevents that drop.

The final version of the NDAA must be hammered out in a House-Senate conference. But the House language on Nimitz is simply a directive that the Defense Department will comply with; it doesn’t have to be part of the final negotiations.

However, the administration’s Office of Management and Budget recently issued a memo that seems to take issue with carrier funding. The House NDAA provision that increases the requirement from 11 to 12 “may not be sustainable within the Navy’s current top line,” the memo states.

Wittman, whose committee is influential on shipbuilding matters, said that language is not a show-stopper.

“I think what they’re doing is making sure we have the commitment in dollars going forward,” he said, adding that carriers are always funded in increments, not all at once. “The provision says there is not enough money to purchase an entire aircraft carrier. We know that, and we’ve certainly done this multiple times in the past. I think what it does is send a signal to make sure we are paying for these efforts in the right magnitude and the right time.”

Wittman said he’s talked with key members of the House and Senate on the funding process and said of OMB’s observation: “This is not going to change anything.”

The other issue on the table regarding carriers is whether the Navy will seek to purchase two ships at once. A two-carrier buy would involve the future USS Enterprise, now undergoing advance work at Newport News, plus the fourth Ford-class carrier, not yet named.

Newport News Shipbuilding has submitted a proposal to the Navy on a bulk buy, and the Navy is currently considering it.