His father died in a WWII cargo ship explosion. Now a former CIA officer, he claims the Navy covered up the real cause

Packed with 600 tons of ammo and explosives, the USS Serpens died in a flash beneath a full moon at 11:18 p.m. on Jan. 29, 1945. Now a Central Intelligence Agency senior finance officer wonders if he's onto one of the last coverups of World War II 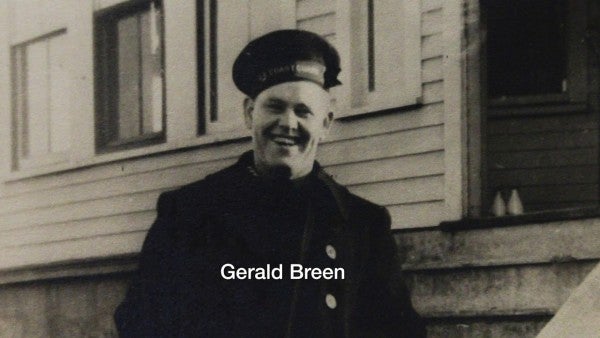 The blast was so violent it rained shrapnel and debris on the island of Guadalcanal a mile away, killed a soldier onshore, knocked everyone standing within that radius off their feet, and flung one sailor into another vessel moored 650 yards away. That ship, the USS YP 514, had its bow and crow's nest demolished, and counted 14 injuries as “missiles” and “screeching shells” continued to explode and turn night into day.

Witnesses said the calamity generated an 8-foot tidal wave, and that the ground shock rippled five miles out. Some said the sky drizzled oil for up to two hours. When bystanders regained their senses, the 100-ton barge that had been transferring bombs onto the Serpens had vanished, and all that was left of the 441-foot cargo ship was its sinking bow, keel up.

Miraculously, two sailors who had been asleep in a forward hold survived. Few other bodies were recovered intact. When the counting was done, 193 Coast Guard crewmen, who had been manning the Navy ship, were gone — along with 56 Army stevedores and an onboard civilian doctor. It was, in short, the most catastrophic single-event loss of life in the history of the U.S. Coast Guard.

Four years later, in what Arlington National Cemetery describes as “the largest group burial” ever hosted, the remains of the 250 casualties from that disaster were retrieved from Guadalcanal, placed in 52 flag-draped coffins, and laid to rest in 28 graves.

According to the Navy, which conducted the investigation, the Serpens blew up during the accidental mishandling of bombs, torpedoes and depth charges. But the son of a crew member isn't buying it.

After pressing Florida politicians and pursuing government records with Freedom of Information Act requests, Robert Breen of Venice has discovered curious gaps in the Serpens' obituary. And at 76, the retired Central Intelligence Agency senior finance officer and certified fraud investigator wonders if he's onto one of the last coverups of World War II.

Alongside 249 other names, “Gerald C. Breen F2 USCGR” is engraved into the octagonal granite marker dedicated to the USS Serpens in Arlington. As a 29-year-old reserve fireman, Gerald Breen was one of a quarter million Coast Guardsmen deployed in the Second World War. According to the letters he wrote home, the Boston native had it made.

“They ate like kings because it was a supply ship. It was like they had Thanksgiving dinner every Sunday,” says Gerald Breen's only child, who has no memory of his father. “They even had bathtubs.”

Commissioned in 1943, the Navy cargo ship spent much of her short life in the South Pacific ferrying supplies to Allied forces. Gerald Breen, who enlisted the same year, joined the Serpens in October 1944. In November, the ship was modified in New Zealand to carry ordnance.

When it reached the Solomon Islands in January 1945, the Serpens' load included 3,399 unfused bombs, each containing 350 pounds of high-explosive Torpex. The vessel anchored a mile off Lunga Point, on the north shore of Guadalcanal.

Two years earlier, Guadalcanal was the site of the Allies' first major land victory over Japan, a bloody affair that took six months to resolve. By early 1945, the front lines had swept more than 2,500 miles to the west. The U.S. fleet had fought its way to the Japanese doorstep, reloading and mobilizing for the invasion of Iwo Jima.

On the evening the Serpens was destroyed, eight of its crew, including Coast Guard Lt. Cmdr. Perry Stinson, had gone ashore. Eyewitnesses remember hearing two consecutive explosions, the second of which expelled the fireball that vaporized the ship. The Navy was responsible for perimeter security.

Thee USS Serpens Memorial at Arlington National Cemetery near Arlington, Virginia, in the United States. This memorial is to the 253 members of the United States Coast Guard who died when the ship exploded on January 29, 1945, while anchored off Laguna Beach at the island of Guadalcanal(Wikimedia Commons/Tim1965)

An only child raised by his widowed mother, Robert Breen had an aptitude for crunching numbers. After college, in 1966, he answered a Boston Globe want ad soliciting government accountants for an unnamed employer. It would be Breen's entrée into the CIA, where he would climb the ladder into the Agency's Office of Logistics, its Commercial Systems Audit Division, the Office of Finance and the Office of Inspector General. Foreign assignments included posts in Paris, Rome, and Iran.

As Breen built a career pursuing efficiency and accountability, something his mother said about Dad's death nagged him for much of his adult life.

Mom was officially notified by the USCG of her husband's death on April 9, 1945, in a letter stating that Gerald Breen was killed when “the vessel … was torpedoed by the enemy.” But she told her son she understood that none of the Serpens' crew received the Purple Heart, awarded to military personnel killed or wounded during hostilities, because the explosion had subsequently been ruled accidental.

Things got more curious in 1995, when Breen attended a 50-year anniversary memorial service in Arlington for the crew. That's where he learned that seven of those aboard the Serpens had in fact received Purple Hearts.

Furthermore, on the eve of that anniversary, one of those survivors, Kelsie Kemp, told a Virginia newspaper the ship had been torpedoed by a Japanese submarine that had been detected shadowing the Serpens prior to the explosion. And in a most puzzling twist, Kemp also remembered seeing a Japanese weather plane beforehand, and that deck gunners were ordered to hold their fire.

“That little plane came out buzzing like a skeeter and we couldn't do anything,” recalled Kemp, since deceased. “There's probably a picture of me in Japan looking up with my mouth gaping open.”

Both Kemp and fellow survivor George Kennedy were among the seven who received Purple Hearts.

Last year, Douglas Campbell, a retired naval intelligence officer, military historian and author, was conducting research at newspapers.com on an unrelated WWII matter when he got sidetracked by the Serpens disaster. He'd never heard of it. Fascinated, he began Googling more recent developments. And he discovered the fierce tenacity of Robert Breen, who launched his quest for answers in 2012.

In the fall 2018 issue of its newsletter, “The Quarterdeck Log,” the Coast Guard Combat Veterans Association revisited the greatest tragedy in USCG history with a four-page spread on the Serpens sinking and its aftermath. Specifically, it focused on documents Robert Breen had acquired through FOIA requests and with the assistance of then-U.S. Sen. Bill Nelson.

Stinson's uncertainty was challenged by a Navy report dated March 21, 1945: “It is believed that the original blast was caused by enemy action, probably by an enemy submarine, since Tokyo radio boasted of the explosion before they possibly could have learned about it from us.”

That finding augmented the March 1, 1945, Navy Department Communique No. 583, which announced the Serpens “has been lost in the South Pacific Area as a result of enemy action.”

And then there's an undated document emerging from the Navy Court of Inquiry hearings from 1945. It was endorsed by four U.S. commands, including three within the Pacific Fleet and another from the South Pacific Area and Force.

“There was, however, absolutely no evidence of rough handling and the minority report was obviously based on the bad reputation which Torpex has.”

But by time the Coast Guard conducted official burial ceremonies at Arlington in 1949, and for reasons unknown, the minority report had prevailed. The USCG's appeals for media coverage stated the explosion was “determined (to be) not the result of enemy action.”

Why the about-face? Breen went searching for the evidence that figured into Navy Judge Advocate General's conclusions on the Serpens in 1949. He also wanted to know who those board members were.

Breen discovered the records had been checked out of the National Archives Records Administration in 2003 by the Navy JAG's office and never returned. Furthermore, Breen's appeals to JAG for the name of the ship that attempted to hunt down the Japanese submarine, as well as its logs, were unsuccessful.

Campbell was intrigued. “It cannot be explained,” he says, of why only a handful of selected members of the Serpens were awarded Purple Hearts. “Based on the findings of 1945, they would've all been automatically nominated for the Purple Heart.”

Alternately, if Purple Hearts were wrongly awarded, they should be revoked and returned.

Breen suspects the Navy blamed the explosion on crew failure rather than enemy activity in order to insulate itself from charges it failed to provide adequate security. Although stringing anti-torpedo netting around anchored vessels was a standard precaution during the war, they were not 100% fail-safe. But there are no records indicating whether or not those measures were taken with the Serpens.

Campbell, however, isn't sure if an intentional whitewash was in play.

“I've got to go with incompetence,” he says from his home in Southern Pines, North Carolina. “I just don't totally believe they purposefully destroyed Navy records to hide anything. I think there would be a lot of other things they wouldn't have wanted out that did get out.”

Campbell remembers requesting information from JAG about an American sub sunk by friendly fire in the Caribbean during the war. He received the findings of the Navy's board of investigation and its subsequent formal board of inquiry. A year later, however, Campbell was contacted by another researcher looking into the same accident, only to be informed by JAG it couldn't find the records.

“After they sent me my copies,” Campbell says, “they evidently misplaced the originals.”

Campbell and Breen are collaborating on a fuller accounting — “The Long Blue Line Disrupted: USS Serpens (AK-97) and the Largest Loss of Life in U.S. Coast Guard History” — which they intend to publish by the end of the year, and in time for January's 75th anniversary. It is incomplete, as neither were able to obtain Japanese records of relevant submarine activity.

The book will also include a cautiously crafted foreword by retired Coast Guard Admiral and former Acting Secretary of Homeland Security James Loy. His statement avoids the controversy, but he declares “the Serpens story is a significant part of (the USCG) legacy and deserves to be told wide and far.”

Breen is also circulating a petition encouraging the USCG to convene a new investigation for the purposes of awarding Purple Hearts to all the victims of the explosion, including his father.

Coast Guard Combat Veterans Association President Stephen Petersen has written Breen a letter expressing “our unqualified endorsement of your efforts.” As Petersen told the Herald-Tribune, 75 years in limbo is long enough. “They should've gotten these medals from the very beginning. And we shouldn't have to beg for them.”

The USCG did not comment on Breen's lobbying campaign.

The co-authors will also travel to Guadalcanal in September, where a team of divers, including two of Breen's sons, hope to retrieve photos of what little remains of the Serpens.

“I'm not saying this was definitely a coverup,” Breen says. “But it has all the indications that someone doesn't want the truth out there.”