The Navy has fired the commander of the amphibious warship Somerset following an investigation into concerns about his command climate.... 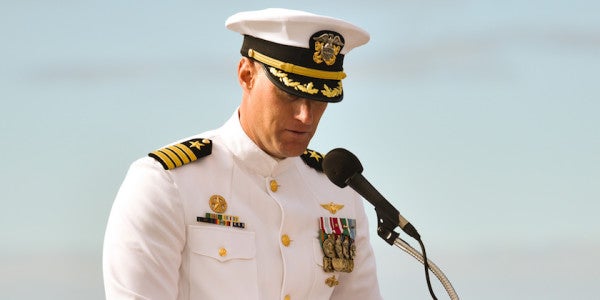 The Navy has fired the commander of the amphibious warship Somerset following an investigation into concerns about his command climate.

“The commanding officer of USS Somerset was relieved of his duties April 12, due to loss of confidence in his ability to effectively lead and carry out assigned duties,” wrote Coronado-based Naval Surface Forces spokesman Lt. Andrew R. Degarmo in an email to The San Diego Union-Tribune.

Rear Adm. Cedric Pringle, commander of Expeditionary Strike Group 3, removed Capt. William Sherrod following a probe into command climate concerns that were not tied to any one event, Degarmo said.

Formerly the Somerset’s executive officer, Sherrod, 45, “fleeted up” to take command of the San Antonio-class warship on Nov. 2.

Sherrod has been temporarily reassigned to the command staff of North Island-based Naval Air Forces. He did not return telephone calls from the Union-Tribune seeking comment.

Capt. Brian Quin, Expeditionary Strike Group 3’s chief of staff, has assumed temporary duties of the Somerset until a skipper can be found.

Last May, the Navy removed both the captain and executive officer of the Somerset’s sister ship, the San Diego-based Anchorage, after commanders said they lost confidence in their ability to lead.

The relief of Capt. Jeff Craig and his second-in-command Lt. Cmdr. Joshua Johnson stemmed from an inspection last spring that found “improper procedural compliance” throughout the warship, according to Naval Surface Forces.

Dismissals for “command climate” problems, like that allegedly caused by Sherrod, are different.

Command climate is the culture of a ship’s crew, the way that they operate ashore and at sea. The Navy charges the commander with sole responsibility for ensuring that it never becomes toxic.

A Florida native who graduated from Jacksonville University in 1994, Sherrod was commissioned through the Naval Reserve Officer Training Corps program and selected for the Surface Warfare field.

He served aboard the destroyer Gonzalez as a young lieutenant before becoming the operations officer and navigator aboard the coastal patrol ship Shamal in 1998.

In 1999, Sherrod transferred to Naval Aviation and earned his flight wings a year later. A Sikorsky SH-60B Seahawk naval helicopter pilot, he was assigned to the “Grandmasters” of Anti-Submarine Squadron Light 46, based in Mayport, Florida.

Before becoming executive officer of the Somerset in mid-2016, he served at sea aboard the frigate Dewert, destroyer Winston S. Churchill, carrier Carl Vinson and the cruisers Hue City and Vella Gulf

He became chief of operations in Iraq for Joint Task Force Balad in late 2009.

Under his leadership, the “Scorpions” received the “Golden Wrench” award for expeditionary units in Helicopter Strike Wing Pacific.