One month after the first novel coronavirus (COVID-19) cases appeared on the USS Theodore Roosevelt, the U.S. Navy has finished testing all of the roughly 4,800 sailors assigned to the aircraft carrier. 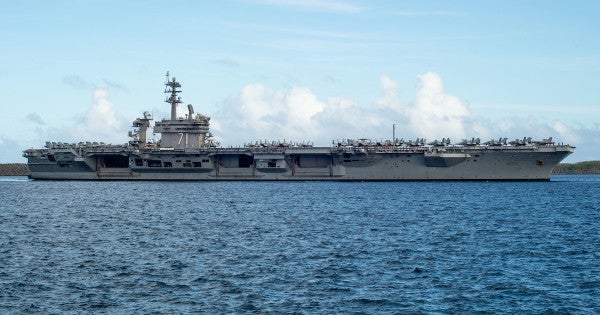 One month after the first novel coronavirus (COVID-19) cases appeared on the USS Theodore Roosevelt, the U.S. Navy has finished testing all of the roughly 4,800 sailors assigned to the aircraft carrier.

The Navy reported Thursday that “100% of USS Theodore Roosevelt (CVN 71) crewmembers have been tested for COVID-19” and 840 sailors aboard the deployed warship have tested positive. The service is still awaiting the results of about 10 tests.

Eighty-eight of those infected have recovered, the Navy said. Four of the sailors who have not yet recovered are currently in the hospital in Guam.

Since the outbreak began, the virus has claimed one life aboard the ship, that of 41-year-old Aviation Ordnanceman Chief Petty Officer Charles Robert Thacker Jr.

The Navy reported Thursday that 4,234 sailors, approximately 88% of the crew, have been moved ashore in Guam, where the ship has been sidelined by the outbreak.

The first three cases aboard the USS Theodore Roosevelt, which deployed to the Pacific in January, were announced on March 24. In the days that followed, the number of coronavirus cases aboard the flattop quickly multiplied.

Two days after the first cases were announced, Navy leadership revealed plans to test all of the sailors aboard the carrier.

“We found several more cases on board the ship,” then-acting Secretary of the Navy Thomas Modly said. “We are in the process now of testing 100% of the crew of that ship to ensure that we're able to contain whatever spread might have occurred there.”

On March 30, Capt. Brett Crozier, the ship's commanding officer, wrote a letter warning that the situation aboard the carrier was worsening and urging the Navy to quickly evacuate the crew. “Sailors do not need to die,” he wrote.

Crozier, who pushed for the evacuation of roughly 90% of the crew, was relieved of his command after his letter leaked to the media.

Modly, who resigned less than a week after Crozier was relieved, said earlier this month that “we cannot and will not remove all the sailors from the ship,” explaining that the plan with regard to the carrier was to “remove as much of the crew as we can while maintaining for the ship's safety.”

The majority of the crew has since gone ashore in Guam, where most are in isolation in hotels and other facilities.

The sailors still on board the carrier have been working to thoroughly disinfect the ship as well as maintain important systems.

The Navy has reported a total of 1,366 cases of coronavirus among its personnel, with the majority of those among sailors assigned to the USS Theodore Roosevelt. A Navy official told Insider that there is currently no clear timetable for when the carrier will be ready to set sail.