The Navy is pulling sailors off an aircraft carrier hit hard by the coronavirus and forced into port in Guam, where many sailors will soon spend two weeks quarantined in vacant hotels 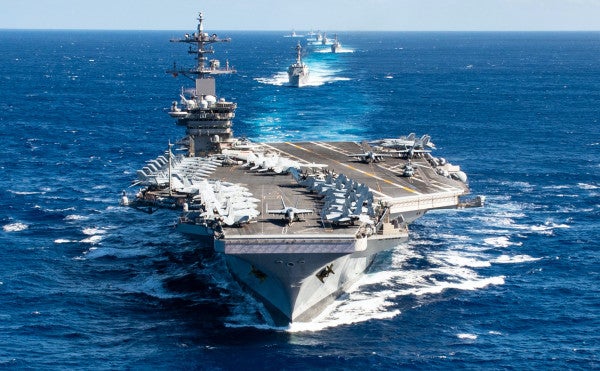 The Navy is pulling sailors off an aircraft carrier hit hard by the novel coronavirus (COVID-19) and forced into port in Guam, where many sailors will soon spend two weeks quarantined in vacant hotels.

At least 70 sailors aboard the aircraft carrier USS Theodore Roosevelt have tested positive for the coronavirus, according to The Wall Street Journal. Some reports indicate the number could be in excess of 100.

“The plan is to remove as many people off the Teddy Roosevelt as we can,” Rear Admiral John Menoni, Navy commander for the Marianas joint region, said at a press briefing Wednesday. At the same event, Guam Gov. Lou Leon Guerrero said that she has “agreed to allow the restricted housing of sailors who have tested negative for COVID-19” in vacant hotels.

Navy sailors will receive daily medical check-ups while in quarantine, which will be enforced by military security.

The Navy first reported last week that the Roosevelt was pulling into Guam so that the crew could be tested for the virus. At that time, the Navy announced that sailors would be restricted to the pier area.

Capt. Brett Crozier, the carrier's commanding officer, sent an unusual memo to Navy leaders Monday calling for the movement of as much as 90 percent of the ship's crew ashore, the San Francisco Chronicle first reported.

The CO argued that keeping sailors in close quarters aboard the ship was an “unnecessary risk,” writing that “Sailors do not need to die. If we do not act now, we are failing to properly take care of our most trusted asset — our Sailors.”

Families of sailors have also been calling on the Navy to take aggressive action.

“There is nothing the Navy can do, there's not a flag they can fold up for any mother, child or wife that is going to satisfy anyone should they lose a love one from this,” a woman whose husband is serving aboard the carrier told Insider. In a letter to the chief of naval operations, she said that sailors “are not safe aboard that ship.”

Acting Secretary of the Navy Thomas Modly told CNN Tuesday that the service is trying to get sailors off the ship but was having difficulties finding enough beds for sailors taken ashore.

He said that the Navy is “having to talk to the government there to see if we can get some hotel space or create some tent-type facilities there.”

The carrier left San Diego for an Indo-Pacific deployment in mid-January and stopped for a 4-day port visit in Da Nang, Vietnam in early March. It also participated in a show of force in the South China Sea with the amphibious assault ship USS America and escort ships.

Navy leaders say that while the plan is to get sailors off the Roosevelt, an unspecified number of sailors will need to stay on the ship to manage critical systems, such as the nuclear reactors, and carry out essential duties.

The governor of Guam suggested Wednesday that there might be local pushback on Navy plans to bring sailors ashore.

“We have an interest in protecting our community and stopping the spread of COVID-19 just as much as the military has an obligation to return the USS Roosevelt to the open ocean to protect Guam and the region,” she said, according to local media.