A US aircraft carrier could be stuck in port for almost a month for COVID-19 testing, but the Navy is trying to cut that time down

A coronavirus outbreak aboard the aircraft carrier USS Theodore Roosevelt has the Navy scrambling to test the entire crew. 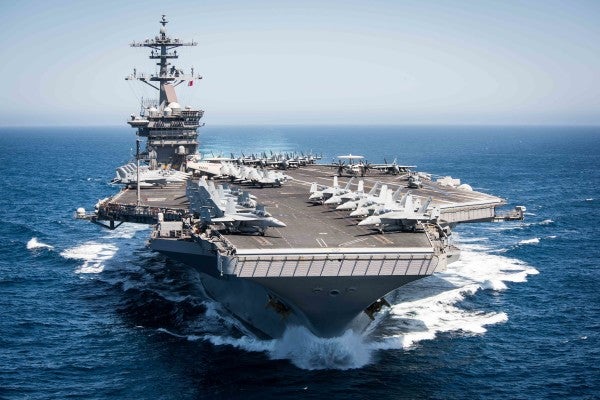 A coronavirus outbreak aboard the aircraft carrier USS Theodore Roosevelt has the Navy scrambling to test the entire crew. At the current testing pace, it could be stuck in port for almost a month, but the Navy is trying to cut that time down.

Three cases were reported aboard the TR on Tuesday. By Friday morning, more than 30 sailors aboard the carrier had reportedly tested positive for the coronavirus, according to Fox News.

In response to the outbreak, the Navy, as acting Secretary of the Navy Thomas Modly said Tuesday, is testing 100 percent of the crew for the virus. The ship is at port in Guam, and it is unclear exactly when the ship will head to sea again on its deployment.

The ship has the ability to test about 200 people per day, Modly told radio show host Hugh Hewitt Friday. The aircraft carrier has roughly 5,000 people on board including its crew, aviation squadrons and onboard staff.

“At a pace of 200 a day, that could take 25 days,” the acting secretary said. “Obviously, that's not acceptable, so we're driving towards a quicker ability to do that.”

“We're flying in more test kits from other large deck ships that we have,” he said, adding that the Navy is “also sending certain number of samples off the ship so that we can get responses more quickly.”

The TR is one of two US carriers in the Pacific, the other being the USS Ronald Reagan, which is currently in port at Yokosuka Naval Base in Japan. Fox News reported Friday that at least two cases have been reported aboard the Reagan.

Modly has repeatedly insisted that the TR remains ready to fulfill its mission if it was ordered to do so in an extreme situation, like the US entering a war.

“If there were a reason for her to go into action, she could easily go do that. We would just go,” he said Friday.

Modly told Hewitt that he does not have a date on when the TR will return to its assigned mission. “We're just working through this as quickly as we possibly can,” he said.