“It was an unprecedented challenge to get to this point" 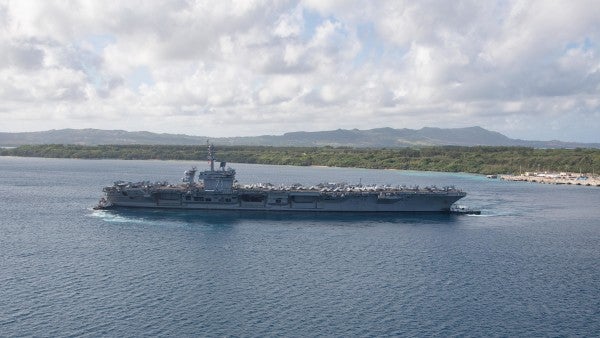 WASHINGTON — A U.S. aircraft carrier has set sail from Guam nearly two months after a deadly coronavirus outbreak began spreading through the ship, leading to the replacement of its captain by the acting Navy secretary, who then resigned in the uproar that followed.

The Navy said the USS Theodore Roosevelt headed into the Philippine Sea on Thursday. “It was an unprecedented challenge to get to this point,” Capt. Carlos Sardiello said in a statement from the 7th Fleet.

The statement added that the crew had undergone training exercises in social distancing and mitigation procedures. That included “wearing masks, medical surveillance of 100% of the crew, adjusted meal hours, minimizing in-person meetings, sanitizing spaces and a simulated medevac.”

On April 2, the acting secretary, Thomas Modly, relieved Captain Brett Crozier of his command for writing and distributing a memo pleading in urgent terms for all but a skeleton crew to be removed from the Roosevelt, which had been sidelined in Guam. “We are not at war,” Crozier wrote. “Sailors do not need to die.”

His memo was made public by the San Francisco Chronicle.

Modly said Crozier had failed to keep his concerns within the chain of command. His response to the crisis including an address to the crew in which he ridiculed Crozier as “stupid or naive.”

Crozier received a spirited ovation from the sailors when he departed the ship. When a recording of Modly’s remarks surfaced, he issued an apology, before resigning.

President Donald Trump, at a White House briefing said he “had no role” in Modly’s departure but that the secretary “did that just to end that problem.”

The Navy recommended that Crozier be reinstated. But the new acting secretary, James McPherson, late last month ordered a more extensive review before making a decision.

The Navy said on April 24 that all of the Roosevelt’s crew members had been tested for COVID-19, with 840 positive and 4,098 negative results. Of the positive cases, 63 sailors recovered. Almost all of the crew — 4,234 sailors — have been moved ashore. One sailor died after getting treatment in an intensive care unit on Guam.

Crozier was among those who became infected.