The Navy made history on Monday by putting to sea for the first time ever an aircraft carrier with F-35B... 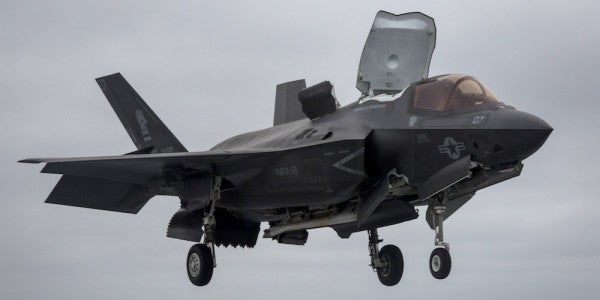 The Navy made history on Monday by putting to sea for the first time ever an aircraft carrier with F-35B jets — and by deploying them in the Pacific, it's a message China and North Korea are sure to hear loud and clear.

The Marine Corps's Fighter Attack Squadron 121 deployed aboard the USS Wasp, a smaller-deck aircraft carrier that used to operate harrier jump jets and helicopters before getting special modifications to field the F-35.

“This is a historic deployment,” said Col. Tye R. Wallace, 31st MEU Commanding Officer in a Navy press release. “The F-35B is the most capable aircraft ever to support a Marine rifleman on the ground.”

An F-35B Lighitng II performs deck landing qualifications on the USS Wasp (LHD-1), March 5, 2018. Marine Fighter Attack Squadron 121 embarked a detachment of F-35Bs on the USS Wasp for the 31st Marine Expeditionary Unit’s Spring Patrol 2018, marking the first operational deployment of the F-35B with a MEU.

The deployment marks the culmination of years of planning. Since its inception, the F-35 has been designed with the idea of accommodating short takeoff, vertical landing variants. Initially, the design compromises forced by the massive tail fan and unique capabilities caused complications, compromises, and long and expensive delays.

But the U.S. has still beaten China, Russia, and the entire world to the punch with a navalized stealth fighter that can fight for air superiority, pull off precision strikes, penetrate enemy airspaces, and coordinate with the two US Navy guided-missile destroyers to guide ship-fired missiles to targets ashore.

The squadron aboard the Wasp has also trained heavily on a new set of tactics meant to keep the U.S. dominant in the Pacific region. Leveraging the short-takeoff, vertical landing ability of the F-35B, the pilots and maintainers drilled on setting up improvised refuel and reloading points, and how to quickly restock the jet for battle much like mechanics perform pit stops during NASCAR races.

Additionally, the F-35B has the option of equipping a gun and opening it up as a close-air-support platform to support Marines making a beach landing.

The result is a stealth fighter/bomber/reconnaissance jet well suited to the Asia-Pacific region, which U.S. adversaries like China and North Korea will be sure to recognize.

“You're about to put for the first time ever fifth-generation fighters on a ship at sea and put it into a highly contested area that is fraught with geopolitical risk and controversy and tensions,” retired Marine Corps Lt. Col. David Berke, a former F-35B squadron commander, previously told Business Insider.

“The implications of a fifth-generation airplane being in is impossible to overstate,” he added. “They're going to provide capability that nobody knows exists yet.”

As Beijing pushes on with its massive land grab in the South China Sea by militarizing artificial islands, intruding in territorial waters of its neighbors, and performing increasingly aggressive fighter jet drills around the Pacific, the F-35B deployment gives the US an advantage in terms of air power at sea.

China has struggled to field its own stealth jets that many see as an answer to U.S. air power in the region.

North Korea, not a powerful nation in terms of air power, will now feel the added pressure of stealth jets it cannot track sitting near its shores in Okinawa or on deployment around the region.