In the latest show of military muscle in the South China Sea, the U.S. has apparently sailed its USS Wasp amphibious assault ship near a strategic reef claimed by Beijing and Manila 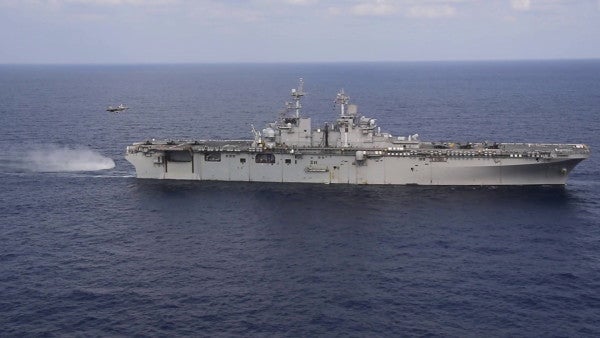 In the latest show of military muscle in the South China Sea, the U.S. has apparently sailed its USS Wasp amphibious assault ship near a strategic reef claimed by Beijing and Manila that lies just 230 km (140 miles) from the Philippine coast.

Filipino fishermen near the site known as the Scarborough Shoal initially spotted what appeared to be the massive U.S. vessel on Tuesday, according to ABS-CBN News. It said planes were seen landing and taking off from the ship, some 5 km (3 miles) away from the fishermen's boat. A video clip shown by the news network appeared to corroborate their account.

Contacted by The Japan Times, a U.S. military spokeswoman would not confirm or deny the Wasp's presence near the collection of outcroppings that barely jut out above water at high tide, citing “force protection and security.” However, the spokeswoman did confirm that the Wasp “has been training with Philippine Navy ships in Subic Bay and in international waters of the South China Sea … for several days.”

Scarborough Shoal, which is also claimed by Taiwan, is regarded as a potential powder keg in the strategic waterway. It was seized by Beijing in 2012 after an extended standoff with Manila. China later effectively blockaded the lagoon, which is rich in fish stocks, and routinely dispatches scores of fishing vessels and government-backed “maritime militia” ships to the area to continue its de facto blockade.

The Wasp was taking part in the annual Balikatan U.S.-Philippine military training exercise “that focuses on maritime security and amphibious capabilities, as well as multinational interoperability through military exchanges,” said U.S. Marine Corps Second Lt. Tori Sharpe, a spokeswoman for the exercises, adding that the exercises were “unrelated to current events.”

Still, beyond the location of the exercises, the Wasp's presence alone in the South China Sea was likely to draw Beijing's attention since this year's Balikatan exercise was the first to incorporate the Wasp paired with the U.S. Marines Corps' cutting-edge F-35B Lightning II stealth aircraft. The F-35B is the short takeoff and vertical landing variant of the aircraft.

“Together they represent an increase in military capability committed to a free and open Indo-Pacific,” Sharpe said.

China covets Scarborough Shoal for its strategic significance, experts say, as it would be the crowning jewel in a bid to solidify Beijing's iron grip over the South China Sea. They say building at Scarborough would create a large “strategic triangle” comprising Woody Island in the Paracel Islands to the northwest and its Spratly islet outposts to the south, giving Beijing the ability to police an air defense identification zone (ADIZ) in the South China Sea.

The impact of such a strategic triangle — which would bring the entire region under Chinese radar, missile and air coverage — would be tremendous for both the United States' and Japan's strategic planning, some experts say, and could be a game-changer in regional power relations.

But any decision by China to forcefully take over the collection of outcroppings for land-reclamation purposes would likely be met with resistance by the U.S., the Philippines and others.

In an effort to push back against China's behavior near Scarborough, the U.S. Navy sent a guided-missile destroyer within 12 nautical miles (22 km) of the site in January last year as part of its larger “freedom of navigation operations” (FONOPs) program in the South China Sea and across the globe.

Washington has lambasted Beijing for its moves in the South China Sea, including the construction of man-made islands, some of which are home to military-grade airfields and advanced weaponry. The U.S. fears the outposts could be used to restrict free movement in the waterway — which includes vital sea lanes through which about $3 trillion in global trade passes each year — and regularly conducts FONOPs in the area.