The Department of Veterans Affairs will no longer allow Confederate flag imagery to be flown on flagpoles at national cemeteries... 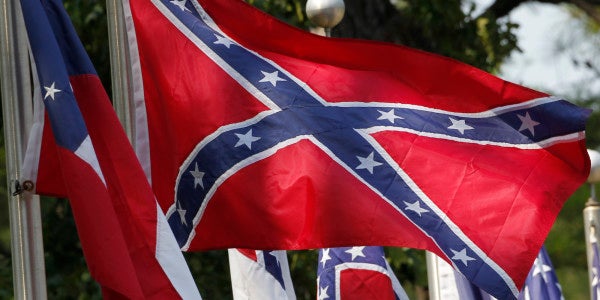 The Department of Veterans Affairs will no longer allow Confederate flag imagery to be flown on flagpoles at national cemeteries on Memorial Day or Confederate Memorial Day.

The policy change follows debate in the House of Representatives earlier this year over continued display of Confederate imagery on federal lands. It also further reduces the number of flag images that can be displayed on federal land after the National Park Service made similar policy changes last year.

The Veterans Affairs decision comes a few months after an amendment barring the display of flag imagery in VA cemeteries was added to the House’s fiscal 2017 Military Construction-VA spending bill (HR 4974), but later removed from the conference report (HR 2577) behind closed doors.

The amendment’s removal frustrated Rep. Jared Huffman, D-Calif., who sponsored a series of amendments this year that would have reduced the image’s display on federal lands, along with several of his colleagues.

They opted to write to the VA in July, asking its leadership to take administrative action to stop the flag from being displayed on large flagpoles.

Earlier this month, Interim Undersecretary for Memorial Affairs Ronald E. Walters wrote back to Huffman saying the VA would change its policy regarding the flag’s display in national cemeteries that contain mass graves of Confederate soldiers.

“We are aware of the concerns of those who wish to see Confederate flags removed from public venues because they are perceived by many as a symbol of racial intolerance,” Walters wrote in a letter. “We are also aware that the national cemeteries originated during the Civil War and that they are the final resting places of those who served on both sides of that conflict and, as such, flags of the Confederacy are also viewed by some merely as historical symbols.”

The VA will, however, continue to allow sponsoring groups, such as the Sons of Confederate Veterans, to display small versions of the flag on individual graves on certain holidays, at no cost to the federal government.

Huffman said Tuesday he was “grateful” for the VA’s decision to prohibit large-scale flag displays at national cemeteries.

“While racist individuals and groups continue to embrace the Confederate battle flag, it has never been more clear that this anachronistic symbol of hatred, slavery, and insurrection should not be promoted or gratuitously displayed on federal property,” the congressman said in a statement.

Whether the image should be displayed on federal land has been one of the central policy debates of the appropriations process since last year, when three amendments to reduce the display of Confederate flag imagery were added to the House’s fiscal 2016 Interior-Environment spending bill, and two were later removed. The resulting uproar caused GOP leaders to pull the bill from the floor and eventually halt the entire House appropriations process.

Those same amendments, proposed by Huffman and fellow Democratic Rep. Hakeem Jeffries of New York, were also offered by them to this year’s Interior-Environment appropriations bill (HR 5538). But the House Rules Committee was able to hold the amendments back from a floor vote, under a structured rule process.