A company led by Andrey Kukushkin has been talking to the federal Department of Veterans Affairs about a five-year medical-marijuana research agreement to study treatment for cancers. 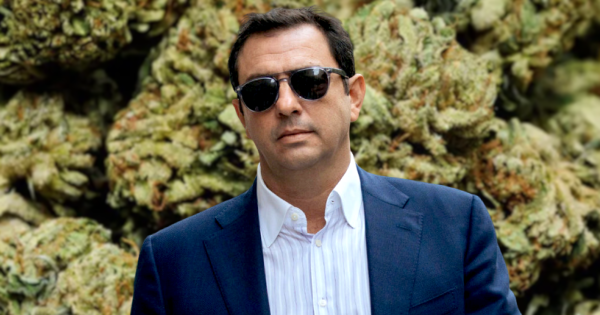 In the months since Andrey Kukushkin was indicted for allegedly funneling foreign money to U.S. political candidates, few details have emerged about the Ukrainian national’s cannabis investments in California.

Kukushkin has been far quieter than his co-defendant, Lev Parnas, who has been giving interviews about his controversial work in Ukraine and was secretly recorded speaking with President Donald Trump about U.S. marijuana policy, among other things.

But Kukushkin appears to have been far more involved in the pot industry beyond his stake in a Sacramento cannabis dispensary. A company led by Kukushkin has been talking to the federal Department of Veterans Affairs about a five-year medical-marijuana research agreement to study treatment for cancers.

The proposed agreement between the Veterans Administration Medical Center in San Francisco and Kukushkin’s company, Oasis Venture LLC, sheds new light on Kukushkin’s influence on the cannabis industry throughout Northern California, as well as his potential access to officials with ties to the Pentagon.

One of Kukushkin’s partners in Oasis Venture, Dr. Rajvir Dahiya, is chairman of the Defense Department’s medical research programs in prostate, breast and ovarian cancer. He is also a urology professor at UC San Francisco and the VA Medical Center in San Francisco.

Kukushkin and three others were indicted in October on charges of planning to funnel foreign money to political candidates in Nevada and other states to gain entry into the legal cannabis business. His co-defendants include businessman Parnas, whose efforts to dig up dirt on former Vice President Joe Biden in Ukraine are at the core of Trump’s impeachment.

The indictment makes no mention of the research project, which was first revealed this week by Politico.

But one of Kukushkin’s Oasis partners, Chuk Campos, told The Sacramento Bee on Tuesday that as far as he knows, the VA is still considering the partnership despite Kukushkin’s legal problems.

The research would “do a lot of good for a lot of people,” Campos said. “It’s focused on cancer.” The cannabis plants would be grown on a ranch near Livermore.

Campos said Kukushkin has agreed to step aside from Oasis “if he’s found guilty of anything.” The New York lawyers defending Kukushkin didn’t respond to requests for comment. All four defendants have pleaded innocent to the federal charges. Efforts to reach Dahiya were unsuccessful.

The federal indictment against Kukushkin and his co-defendants says the illegal campaign money came from an unidentified foreign investor. A Russian businessman named Andrey Muraviev was revealed in court papers as the secret financier behind another marijuana investment in the Bay Area involving Kukushkin.

As reported by The Bee, Kukushkin, who lives in San Francisco, is an officer and permit holder in the Twelve Hour Care retail cannabis dispensary on Fruitridge Road.

His partner in that business is Garib Karapetyan of Sacramento, the undisputed leader of the city’s $142 million-a-year legal retail pot industry. The Bee’s reporting on Karapetyan’s dominance of the dispensary business — he is part-owner of eight of Sacramento’s 30 retail sites — has sparked an investigation by city officials.

Kukushkin and Karapetyan also are partners in a company called Next Phase Holdings LLC, which is developing a home-delivery marijuana business from a building near the Fruitridge Road dispensary, and two management companies, KKMC Management LLC and Legacy Botanical Company LLC. Legacy Botanical is defunct, according to state records. Muraviev, the Russian businessman, has been a partner in KKMC and Legacy Botanical.

Karapetyan’s lawyer, Brad Hirsch, said Tuesday his clients had “no connection to the substance” of the Politico article.

Despite a proliferation of states like California passing laws that decriminalized marijuana, it’s still illegal and classified as a Schedule 1 narcotic under federal law. Only one facility at the University of Mississippi is permitted by the federal government to conduct research on cannabis.

Last September, a month before he was indicted, Kukushkin received an email from Yuichiro Tanaka, a research biologist at the VA Medical Center, outlining the terms of the agreement. The research project, which is budgeted at $650,000 a year for five years, was supposed to begin last month, according to the email, a copy of which was obtained by The Bee.

Also participating in the project would be the Northern California Institute for Research and Education, a nonprofit dedicated to funding joint research between the VA and UC San Francisco. Officials at the institute declined to comment and referred questions to the VA.

Oasis was initially turned down by Alameda County officials in 2017 to cultivate marijuana on a ranch near Livermore. But after the county expanded the number of cultivation sites it would allow, Campos said Oasis was granted a business permit and is working on getting its conditional use permit. The conditional use permit would allow the company to grow marijuana on the ranch.