The Department of Veterans Affairs denies more than 80 percent of veterans’ claims for benefits for Gulf War-associated illnesses —... 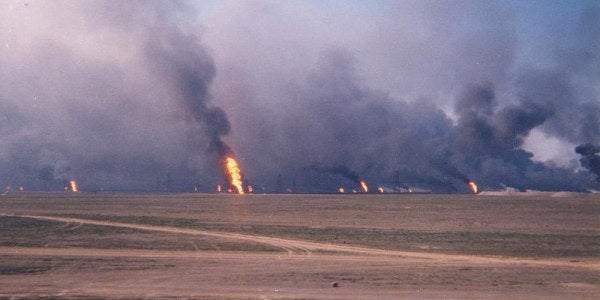 The Department of Veterans Affairs denies more than 80 percent of veterans’ claims for benefits for Gulf War-associated illnesses — an approval rating three times lower than all other types of claims, according to a Government Accountability Office report released Monday.

From 2010 to 2015, the VA approved 17 percent of claims – or 18,000 of 102,000 — for health care and disability compensation for veterans suffering from Gulf War Illness, which is an umbrella term for certain medical conditions common in some of the 1 million servicemembers who deployed to Southwest Asia in the past 27 years. Besides claims getting denied more often, veterans seeking benefits for Gulf War illness are having to wait four months longer on average to hear back from the VA, the GAO found.

There’s confusion among VA staff about how to handle the claims, the report states. The Government Accountability Office also found VA medical examiners, who are key in providing information for veterans’ claims, lacked training on Gulf War illness. As of February, 90 percent of medical examiners had not been trained on how to conduct exams for Gulf War illness. The VA made the training optional.

However, the VA attributes the low approval ratings to the complexity of Gulf War illness, thought to be caused by toxic exposure. There’s not a single definition for Gulf War illness, which includes a cluster of different conditions, as well as nine infectious diseases.

“There’s a whole range of illnesses that are covered under this umbrella term of Gulf War Illness, and it’s difficult to know the causes of those conditions,” said the report’s author, Melissa Emrey-Arras. “Part of that is because many of the people who served were exposed to things like pesticides, smoke from oil well fires and even depleted uranium. It’s difficult to piece together.”

VA Deputy Chief of Staff Gina Farrisee responded to the report in a letter, promising medical examiners would be required to go through training on Gulf War illness by November. The training is a 90-minute online course.

In 1994, Congress passed legislation allowing Gulf War veterans with undiagnosed illnesses a “presumption,” meaning they don’t have to prove to the VA their illnesses were caused by military service.

An amalgam of medically unexplained chronic illnesses found among Gulf War veterans, including fibromyalgia, fatigue and gastrointestinal disorders, was added to that presumption in 2001. Nine infectious diseases were added in 2010. To secure benefits, veterans had to have served on active duty in Southwest Asia any time after Aug. 2, 1990, and have an illness that falls into one of those categories.

Even with the law, approvals are low compared to other types of claims. While 17 percent of claims of Gulf War illness were approved from 2010 to 2015, VA staff approved 57 percent of veterans’ claims for all other medical issues during the same time.

Ron Brown, president of the National Gulf War Resource Center, has been helping Gulf War veterans with their denied claims for the past three years. He communicates between veterans and VA leadership, and is often successful at getting a veteran’s denial reversed.

Brown had a direct line of communication with former VA Secretary Bob McDonald and he has advocated for better training for VA staff. He has also criticized the VA for being too vague in denial letters to veterans, contending more specific information about why a claim was denied would help veterans know their next step.

The Government Accountability Office discovered the same problem. Emrey-Arras described the denial letters as technical, legalistic and “difficult to understand.”

“I’m extremely disappointed,” Brown said. “These are the same issues the National Gulf War Resource Center has been trying to bring to the VA’s attention for three years now. I’m left scratching my head on what we’ve accomplished. We’ve had 26 years to get this right, and we’re not even close. These vets are struggling.”

Brown served in Operation Desert Storm in 1990-91 and it took 13 years to gain approval for his own claim of Gulf War illness. He now lives in Roanoke, Va. According to a breakdown in the report of approvals and denials of Gulf War illness claims by city, Roanoke had one of the lower approval ratings in 2015.

Besides requiring more training for medical examiners, Farrisee wrote the VA would be more specific in its letters of denial to veterans and gather a group of experts to come up with a clear plan for researching Gulf War illnesses.

The VA has spent more than $160 million from 1994 through 2015 on research related to Gulf War illnesses and was given another $12.3 million for the research in 2016. Yet, the VA has not added any conditions since 2010 to ones already associated with Gulf War service. It tried and failed last year to create a fast-track to compensation for Gulf War veterans with brain cancer.

“There’s not a clear, single definition of what Gulf War Illness is at this point,” Emrey-Arras said. “The VA has had a goal of having a single definition, and yet they don’t have it. They have no strategic plan of getting there, no steps laid out to make that so.”

VA officials will have more opportunity to respond Thursday, when the report will be the subject of a congressional hearing. Two subcommittees of the House Committee on Veterans’ Affairs – one that deals with VA oversight and the other focused on disability assistance – will hold the hearing at 10 a.m.

Brown isn’t confident the report and another hearing will produce change. He provided testimony last March about the VA’s low approvals for Gulf War claims and will again submit written testimony with similar information.

“This isn’t the first time they’ve had reports from the GAO, and what’s changed?” Brown said. “We keep regurgitating the same stuff over and over again. It’s just like anything else, nothing ever gets resolved fast at the VA.”