An ethics law that prohibits Department of Veterans Affairs employees from receiving money or owning a stake in for-profit colleges... 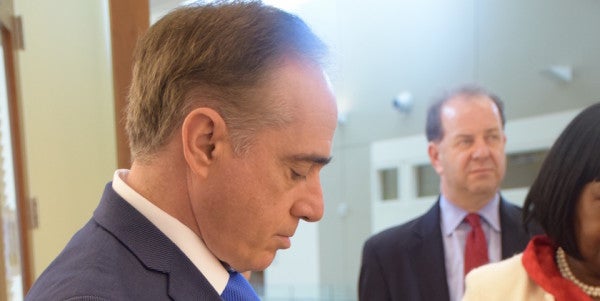 An ethics law that prohibits Department of Veterans Affairs employees from receiving money or owning a stake in for-profit colleges that rake in millions in G.I. Bill tuition has “illogical and unintended consequences,” according to VA, which is pushing to suspend the 50-year-old statute.

But veteran advocacy groups say suspending the law would make it easier for the for-profit education industry to exploit its biggest cash cow: veterans.

In a proposal published in the Federal Register on Sept. 14, VA claims that the statute — which, according to The New York Times, was enacted following a string of scandals involving the for-profit education industry — is redundant due to the other conflict-of-interest laws that apply to all federal employees and provide sufficient safeguards.

Critics of the proposal, however, say that the statute provides additional regulations that protect against abuse and provide more transparency.

“The statute is one of many important bipartisan reforms Congress implemented to protect G.I. Bill benefits from waste, fraud, and abuse,” William Hubbard, Student Veterans of America's vice president of government affairs, said in an email to Task & Purpose. “A thoughtful and robust public conservation should be had to ensure that the interests of student veterans is the top of the priority list.”

V.A. argues that, in practice, the statute — 38 U.S.C. 3683 — punishes agency employees “who have not engaged in any real conflict of interest,” and is, therefore, “unjust and detrimental to VA’s ability to serve veterans.” For example, a V.A. doctor who teaches or has ever taught at a for-profit school attended by veterans using G.I. Bill education benefits could be reprimanded under the statute.

“Our response was aimed at easing the concerns of numerous VA employees,” Curtis Cashier, a VA spokesman, told The New York Times.

However, as Walter M. Shaub Jr., a former director of the Office of Government Ethics, told The New York Times, 38 U.S.C. 3683 allows for waivers to be granted to individual VA employees or even groups of employees. The proposal is set to become law on Oct. 16, at which point waivers would no longer be necessary.

Critics of the VA’s proposal are concerned that suspending the statute would make it possible for high-ranking agency officials to enact policies that benefit for-profit schools in which they have a financial interest. As The New York Times notes, it could also allow for-profit schools to pay VA employees to promote their institutions when advising veterans about their educational benefits.

“Student veterans were already facing an aggressive rollback of their protections under the Trump administration’s Education Department,” Wofford added.

Last month, a report by Reveal News from The Center for Investigative Reporting detailed how the University of Phoenix, a for-profit college, had paid $250,000 to host 89 events at Fort Campbell, an Army garrison on the Tennessee-Kentucky border. The university was also allowed to place marketing material across the base, including in official welcoming packets for new soldiers. Reveal also found that the university had paid for similar arrangements with four other large military bases.

For-profit colleges have a staggeringly low graduation rate — 7.3 percent, according to Reveal. However, the for-profit education industry is the largest recipient of taxpayer subsidies under the post-9/11 G.I Bill.

“I am deeply concerned the VA is opening the door for predatory for-profits to take advantage of men and women who have bravely served our country,” Senator Patty Murray, Democrat of Washington, told The New York Times.

The VA proposal will go into effect on Oct. 16 unless the agency “receives a significant adverse comment” by or on that date. No such comments have yet been submitted nor have any public hearings been scheduled.

“Our hope is that VA will heavily consider public feedback on this considered change,” Hubbard said.