Veterans Affairs Secretary David Shulkin on Wednesday publicly apologized for a botched surgery performed four years ago that left a... 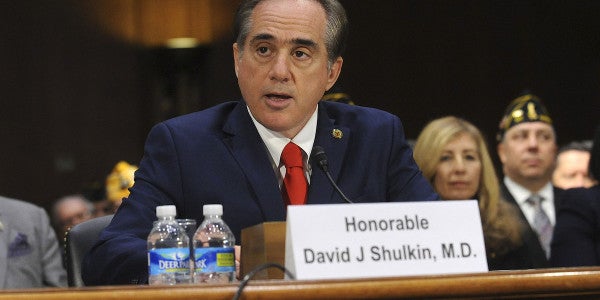 Veterans Affairs Secretary David Shulkin on Wednesday publicly apologized for a botched surgery performed four years ago that left a scalpel inside an Army veteran.

Shulkin said he would use the incident as a teaching moment to create a safer environment for veterans at VA hospitals.

“It’s an event that should never happen, and I’m deeply sorry that any veteran should have to undergo this,” he said in response to questions from Sen. Richard Blumenthal, D-Conn., during a Senate Veterans’ Affairs Committee hearing. “Of course, this was inadvertent on the surgeon’s part. When the surgeon discovered this … he went to the veteran, acknowledged the mistake, apologized for it and took responsibility for it.”

The scalpel was left inside Glenford Turner, a 61-year-old Connecticut resident, after a 2013 surgery at the West Haven VA, his lawyer told local news reporters. Turner went back to the VA in March suffering from dizziness and abdominal pain, and an X-ray showed the scalpel inside his body. He underwent a second surgery to remove it.

Turner filed a lawsuit against the VA in U.S. District Court last week.

Blumenthal said Wednesday that the VA had not yet responded to Turner’s claim for compensatory damages.

“The VA has an administrative and moral responsibility to respond, and I’m disappointed they haven’t done so,” he said.

Shulkin said he would respond to the claim.

He described the doctor who performed Turner’s 2013 surgery as well-trained and said he is a faculty member of Yale University. Shulkin also said such incidents happen less often in VA facilities than other U.S. health care systems.

“While this is an extremely rare event, it happens in the country 1,500 times a year, and in the VA, it’s happened 12 times,” he said. “That’s a rate in the VA much less than what happens outside, but that’s no excuse.”

VA procedure is to perform X-rays only after high-risk surgeries, Shulkin said. After this, he has considered expanding the practice to more surgeries.

“Patient safety is my passion,” Shulkin said. “We’re going to be committed to making a safer environment.”