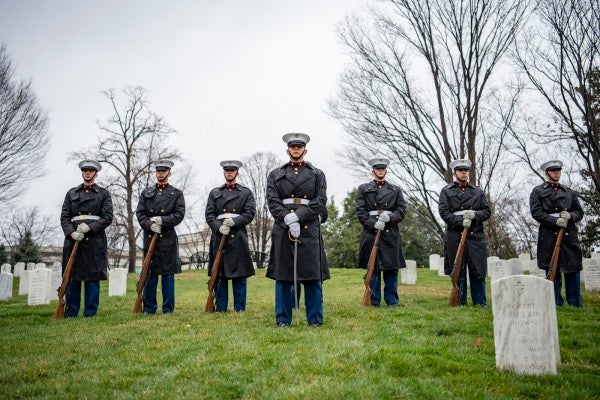 “Committal services and the rendering of military funeral honors will discontinue until further notice,” the department said in a release, adding that while immediate family members are permitted to witness the burial of a deceased veteran, no more than 10 people are allowed to observe the interment.

COVID-19 Update (March 19): Interments will continue at all VA national cemeteries but starting March 23 committal services and the rendering of military funeral honors will not be conducted until further notice. Up to 10 immediate family members may witness the interment. pic.twitter.com/XDo8JPiUVR

Earlier this week, President Donald Trump said that he is recommending that people in the United States avoid gatherings of more than 10 people. The Trump administration launched new policy guidelines Monday aimed at dramatically slowing the spread of the coronavirus over the next two weeks.

The VA said that families can schedule committal services for a later date if they choose to do so. The VA conducts burial services for over 130,000 veterans and eligible family members each year, Military Times, which first noted the new guidance, reported, citing VA records.

VA Secretary Robert Wilkie said in a statement Friday that the department is “committed to the safety of our Veterans, their families and employees, and have implemented an aggressive public health response to COVID-19.”

“At the same time,” he continued, “we continue to take steps to provide flexibility to Veterans and their loved ones, where possible.”

The department added that although VA national cemeteries remain open, visitors are “strongly urged” to avoid any unnecessary travel.

The coronavirus that first appeared in China is now a pandemic, one that has infected more than 265,000 people worldwide and killed over 11,100 people. In the US, the highly-contagious virus has spread to 18,000 people and killed at least 225.

The VA has reported at least 130 veteran cases, and there have been two coronavirus deaths in this community, Military Times reported.