"This matter is a high priority for our office." 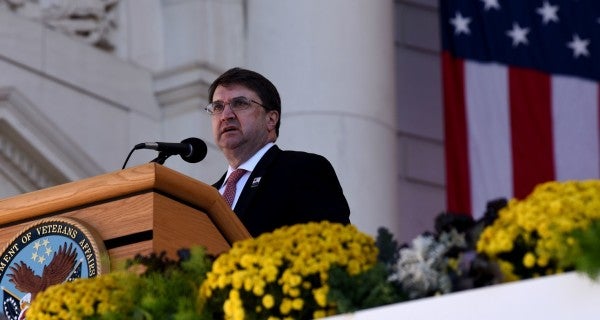 The Inspector General of the Department of Veterans Affairs has opened a probe into whether VA Secretary Robert Wilkie tried to discredit a veteran who reported a sexual assault at a Washington-area VA hospital.

“This matter is a high priority for our office,” VA IG Michael Missal wrote in a letter to Rep. Mark Takano (D-Calif.) on Thursday confirming the probe. The news was first reported by The Washington Post.

“VA will cooperate fully, just as the department did with the initial investigation into the allegations regarding the Washington DC VA Medical Center,” Christina Mandreucci, a spokeswoman for VA, told Task & Purpose. “VA remains focused on maintaining a welcoming environment to all who have worn the uniform, including the 41 percent of all women Veterans who are enrolled in VA care.”

The IG review in September focused on an allegation made by Andrea Goldstein, a Navy reservist and staffer on the House Women Veterans Task Force, who said a man at a Washington, D.C. VA Medical Center had “pressed his entire body” against hers and told her she looked like she “could use a good time.”

Goldstein said she reported it immediately to staff, but police were not notified until she went to see her doctor. Video cameras at the hospital were not working at the time and no charges were ever filed.

Wilkie subsequently criticized Takano and Goldstein, writing in a letter that “the unsubstantiated claims raised by you and your staff could deter our veterans from seeking the care they need and deserve,” despite there never being any determination that Goldstein's allegations were unsubstantiated.

“Neither I nor my staff told you or anyone else at the Department that the allegations were unsubstantiated,” VA Inspector General Michael Missal wrote to Wilkie in January. “Reaching a decision to close the investigation with no criminal charges does not mean that the underlying allegation is unsubstantiated.”

Takano’s staff received information this month from a senior VA official, confirmed by The Washington Post, that Wilkie worked to discredit Goldstein’s credibility following her report that a man groped and propositioned her in the main lobby of the agency’s D.C. Medical Center.

Wilkie told his staff that his inquiry discovered that Goldstein had filed multiple complaints of sexual misconduct while serving in the Navy, according to three current or former senior VA officials. Over several months, Wilkie shared his findings with his senior staff at morning meetings on at least six occasions, these people said.

Wilkie then suggested to several people on his staff, including his public affairs chief, that they use the information he collected to discredit Goldstein, the people said. It is unclear whether any followed through.

Similarly, Leo Shane of Military Times reported that Wilkie had looked for damaging information to use against Goldstein “for months” after the controversy, citing a VA insider familiar with the case.

Goldstein declined to comment when reached by Task & Purpose.