Please don't do this 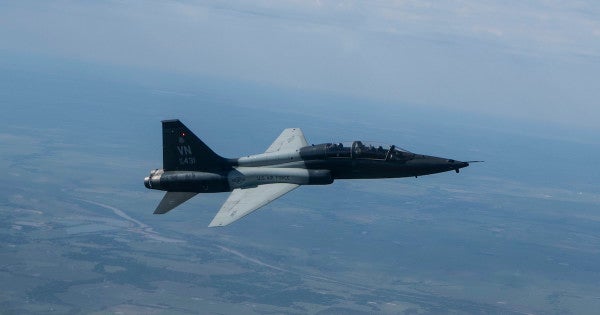 ENID, Okla. — An illegally operated drone was reported Wednesday by Vance Air Force Base to Enid Police Department and shut down flight operations as law enforcement officers searched for the operator.

According to a statement from Vance Air Force Base public affairs, the drone was seen by a T-38 pilot at 1,500 feet above ground level. The T-38 came within 1,000 feet of the drone and was “close enough that the pilot could spot the drone as he passed it,” according to the Vance statement.

The pilot reported the drone to the base supervisor of flying, and the base subsequently reported the incident to EPD and filed a report with the Air Force's Air Education and Training Command.

“Enid Police Department received a call a 2 p.m. from Vance Air Force Base officials concerning a drone flying in the area of Chisholm High School and Golden Oaks Senior Living within the flight path of Vance Air Force Base aircraft,” Holtzclaw said. “The drone was spotted about 1,500 feet in the air, well above the the legal altitude for small, unmanned drones.”

He said officers from the department, as well as deputies from Garfield County Sheriff's Office, were sent to the area but no one was found operating a drone.

“The base stopped flying operations temporarily due to the drone being in the air,” Holtzclaw said. “It could be very dangerous to the pilots, aircraft and to the people on the ground.”

Holtzclaw, who also is a licensed drone operator for the Civil Air Patrol, said Federal Aviation Administration rules require drones to fly no more than 400 feet above ground level. There also are rules for operating drones near airports and military bases.

Vance halted flight operations in the T-38 pattern for nearly two hours and “multiple training opportunities in the pattern were lost (practice landings and emergency patterns) due to this drone,” according to the base statement.

The statement from Vance also reiterated the danger of flying a drone in occupied airspace.

“Flying a drone near a military installation is prohibited by the FAA,” according to the Vance statement. “It endangers the lives of our aircrews and the citizens we fly over.”

The FAA encourages the public to report unauthorized drone operations to local law enforcement or to the local flight standards district office for Oklahoma at (405) 951-4200.