‘Did my girl have to die?’ — Vanessa Guillen’s family struggles to find answers after soldier’s slaying

The remains of 20-year-old Spc. Vanessa Guillen were found near the Leon River in Bell County in late June, nearly three months after she was last heard from while working inside an armory room at Fort Hood 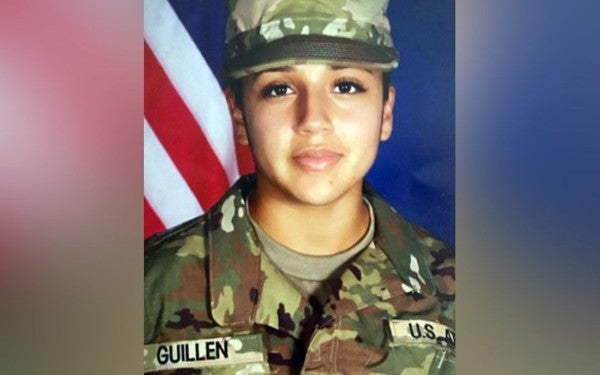 HOUSTON — Gloria Guillen's fingers clenched her Rosary as she painfully described one of her last memories of her daughter — the moment the proud mother learned Army Spc. Vanessa Guillen of Fort Hood was going to be a bride.

Sitting in her Houston home last week beside her youngest daughter, Lupe, who translated for the interview, Gloria Guillen said in Spanish that Vanessa had gleamed with excitement as she planned for a wedding in November of next year.

Now, the Guillen family is left planning for a funeral this July.

The remains of 20-year-old Spc. Vanessa Guillen were found near the Leon River in Bell County in late June, nearly three months after she was last heard from while working inside an armory room at Fort Hood.

Investigators believe a fellow soldier, Spc. Aaron David Robinson, beat Guillen to death with a hammer the morning of April 22. Authorities have accused Robinson's 22-year-old girlfriend, Cecily Aguilar of Killeen, of helping Robinson dismember, burn and bury Guillen's body about 20 miles away from the post.

Robinson fatally shot himself on July 1 when local authorities confronted him off post, Killeen police have said. Aguilar was charged in federal court with conspiracy to tamper with evidence.

But the Army's account of how Guillen died remains riddled with holes that investigators refuse to clarify, said the family's attorney Natalie Khawam. The attorney said she hoped publicizing such questions would push the Army to answer the family's pleas for transparency.

Army Criminal Investigation Command investigators sat down with the Guillen family the day of Robinson's death and told them the 20-year-old soldier had killed Guillen because she had seen a photo of Aguilar on his phone, recognized her as a woman married to another Fort Hood soldier, and threatened to report his affair, according to Khawam.

The family does not accept the Army's explanation for a motive.

“Immediately, Vanessa's dad said, 'That's not something Vanessa would do,'” Khawam said. The Guillen sisters in unison agreed that the investigators' explanation was wrong.

Gloria Guillen said she saw her daughter's health progressively deteriorate over the months leading up to her disappearance, saying her normally muscular and vibrant daughter became thin and reserved. The mother said she begged her daughter to tell her what was wrong.

The Guillen family said Vanessa had told other soldiers at Fort Hood that she was being sexually harassed and eventually confided in her family, saying it was Robinson.

The Army has maintained that it has found no substantial evidence that Robinson was sexually harassing Guillen.

The American-Statesman and USA TODAY attempted over a two-week period to speak with investigators from the Army, the FBI and Killeen police to verify Khawam and the Guillen family's accounts of what took place, but did not receive a response or was told “no comment.”

“Due to the ongoing legal proceedings by the United States attorney's office, Western District of Texas, it would be inappropriate for us to comment at this time,” said Christopher Grey, spokesman for the Army's Criminal Investigation Command.

Daryl Fields, the spokesman for the U.S. attorney's office, also said he could not provide answers to the list of questions: “Thank you for your latest inquiry, but our office is not commenting on this investigation beyond the information provided in the federal criminal complaint.”

Vanessa enlisted in June 2018 and was working as a small arms/artillery repairer with the 3rd Cavalry Regiment at Fort Hood. She never deployed overseas but was awarded the Army Commendation Medal (posthumously), the National Defense Service Ribbon, and the Army Service Ribbon.

Robinson, who had been in the Army since 2017, worked in the same Regimental Engineer Squadron as Guillen.

Khawam said if Guillen again denied Robinson's advances in the armory room on April 22, it could have led to her death. She said Robinson could have simply lied to his girlfriend as to why he killed Guillen.

“We believe Robinson could have made up that story to Aguilar because he needed help burying her body,” Khawam said. “He's going to tell her, 'Honey, I killed her for you because she was going to report us.' He's not going to say, 'Honey, I was sexually harassing Vanessa again and killed her.' “

A motive that 'does not make sense'

According to court records, Robinson admitted to Aguilar that he moved Vanessa Guillen's body from Fort Hood to a remote site in Bell County.

Investigators said Aguilar helped mutilate and dispose of Guillen's body and, at some point, recognized the remains as Guillen.

A criminal complaint filed against Aguilar accuses her of tampered with evidence, including Guillen's body on April 23 and 26 to “impair its integrity and availability for use in an official proceeding.”

Army investigators provided the family with time stamps of when Robinson checked in and out of the armory room on April 22, the day Guillen was last seen, and when Guillen texted Robinson to let him know she was outside and needed to be let into the building.

The family says the Army told them that they never recovered Guillen's cell phone and instead used phone records to read her last text message.

Army investigators also told the family that they found blood residue splattered throughout the armory room, which would have happened when Robinson killed Guillen with a hammer, Khawam said.

However, the family again questions how Robinson would have killed the soldier, stashed her into a Pelican case, cleaned up the blood and toted her body off base without being found out.

“They said the whole room was painted in red,” Khawam said. “How would Robinson be able to commit the perfect murder in 43 minutes? It's impossible.”

Khawam said she was also told a third suspect was detained. Army investigators, though, have repeatedly denied detaining any other suspects.

The Guillens said they struggle to believe what Army investigators say.

Gloria Guillen, along with her daughters, drove to Killeen the night of April 22 because Vanessa was not returning phone calls or text messages the entire day. They were the ones who reported her missing to her superiors that night, Guillen said, even though investigators have said publicly the Army told the family.

Army investigators told the family they were doing everything they could to search for Guillen on and off the post in the weeks after her disappearance, but would provide no details or updates.

The family garnered national attention as they held protests outside of the post in Killeen, Houston and Washington, D.C., all while demanding answers because they said they were consistently left in the dark.

Mayra Guillen last week said much of what the family learned about her younger sister's disappearance was through news reports and press conferences. She said Army investigators rarely contacted the family first before releasing new information.

The Guillens' pleas for help spread nationally after #IAmVanessaGuillen went viral on social media earlier this month. The hashtag became a platform where service members shared their own experiences of sexual harassment and assault.

The family called the movement the #MeToo of the military.

The #IAmVanessaGuillen hashtag is even making its way to lawmakers on Capitol Hill. On July 30, Khawam and the family will be pushing for a new law to allow a third-party investigative team to look into reports of sexual harassment within the military.

“But it was not so much for harassment; it was for harassment, but there is something more,” she continued. “I want an investigation into what happened.”

The Guillens said instead of mourning their loss with family and friends, they plan to continue to grieve in front of cameras and film crews until they believe justice has been served.

Lupe Guilllen, Vanessa's sister who is just 16, said the fight is not over until the Army stops “telling lies” and gives the family answers.

“You know how they say no one is perfect?” Lupe asked. “Well, Vanessa was that (perfect) person. She was caring and respectful and always used to joke about everything. We were always fighting, but that's sisterhood. Who doesn't fight?”

Gloria Guillen said after learning of her daughter's death she was brought back to her prayer to God when Vanessa was just 15 days old. Vanessa as an infant had been intubated and clinging to life at the hospital. And, Gloria believes it was her prayers that healed her.

“I prayed to God so much,” Gloria Guillen said. “She didn't die because God had a purpose for her.”

“She taught me many things because she was always tender, she was loving to me and we always loved each other. We are going to love each other all our lives. A lifetime,” Gloria said.