"I saw to the Guillen family, you have our promise that we are going to make sure Vanessa's life has not been lost in vain" 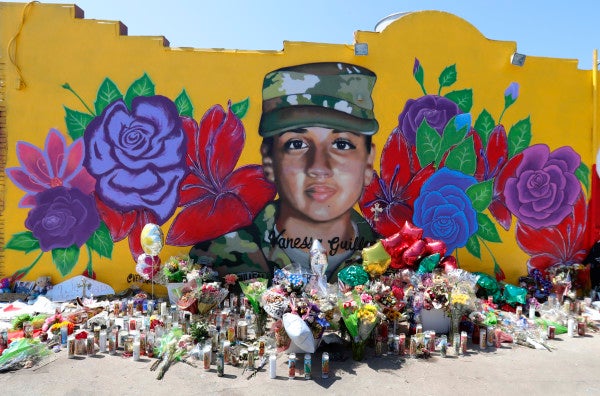 For the family of slain Fort Hood soldier Vanessa Guillen, this month should have been a joyful milestone as they celebrated her 21st birthday back home in Houston.

Instead, the grieving family on Wednesday joined lawmakers on Capitol Hill to campaign for legislation many supporters say could have saved the young soldier's life.

Lawmakers for months worked to bring forward the I Am Vanessa Guillen Act, previously known as the #IAmVanessaGuillen bill, that seeks to set up third-party groups to investigate and prosecute those accused of sexual misconduct within the military.

The measure also would require investigations and new guidelines into how the military responds to reports of missing soldiers.

Related: Inside the disappearance and death of Vanessa Guillén

Guillen was last seen on April 22 and her disappearance remained a mystery until her remains were discovered near the Leon River in Bell County on June 30.

Her family maintains that Guillen was sexually harassed by one or more fellow soldiers at Fort Hood, including Spc. Aaron Robinson, who authorities believe killed Guillen while the two worked together in a Fort Hood weapons room the day she disappeared. Robinson died July 1 after shooting himself as local police tried to detain him, authorities have said.

While Army officials say they've found no substantial evidence that Guillen was the victim of sexual misconduct, her case brought national attention to the issue.

Former and active-duty service members used the social media hashtag #IAmVanessaGuillen to share personal accounts of sexual misconduct within the military, which raised public doubts about whether military leaders properly handle investigations into such matters.

“Today we're not only here for Vanessa, we are here to save lives,” said Lupe Guillen, the soldier's 16-year-old sister, addressing lawmakers Wednesday. “We are suffering a crisis of sexual harassment and sexual assault in the U.S. Army. Sexual harassment increases every year, yet nothing is being done.

Lupe added that they needed to address sexual violence by holding those accountable for their actions.

“Life happens once, and there is no going back,” Lupe continued. “I know everything I do today will not return my sister, but it will save lives.”

Speaker of the House Nancy Pelosi plans to bring the bill to the floor of the U.S. House for a vote no later than November if the two lead sponsors — Jackie Speier, D-Calif., and Markwayne Mullin, R-Okla. — can get 90 Republican members to join, in addition to the 75 co-sponsors already on board.

“This is very remarkable to be able to introduce this bill today and have it taken up before the end of the session,” Speier said.

Attorney Natalie Khawam, who represents the Guillen family, began advocating for the elements in the proposed legislation after learning of the family's sexual harassment allegations.

If the bill is signed into law, the U.S. military would have exactly two years to implement the legislation.

In addition to creating a third-party, confidential reporting system, Speier and Mullin also want to establish specialized prosecutors within the Department of Defense.

Sexual misconduct cases would first be reported to independent investigators, which can either be within the Department of Defense or the military as long as they are not within the accuser's or the accused's chain of command.

A final report would be due within 20 days of the end of the investigation.

Only the specialized prosecutors would tackle cases of sexual assault and harassment occurring within the military's ranks, according to lawmakers.

Under current law, charging decisions for offenses are made by commanding officers. However, lawmakers proposing the bill say this is problematic because commanders carry concern for the welfare of all individuals under their command — both victim and suspect.

“Commanders may also be concerned with the professional reputation of their units and the impacts a public court-martial may have on that reputation,” lawmakers wrote in the bill's summary.

Lawmakers supporting the bill say leaving prosecution decisions to the commander creates a conflict of interest and may discourage survivors from reporting an assault, “especially in cases where a toxic command environment contributed to a climate where sexual violence is tolerated.”

Under the proposed legislation, the military would be required to establish an office of the chief prosecutor in each of its branches. All charging decisions for sex-related offenses, including sexual harassment and sexual assault, would be handled by the service's chief prosecutor.

If the chief prosecutor determines not to convene a court martial, the commander would continue to have discretion over a range of administrative sanctions. Those sanctions include punitive discharges and rank reductions against the offenders.

The bill also would allow military victims of sexual harassment or assault to file a lawsuit for monetary damages against the Department of Defense.

Under current law, only a civilian who is sexually violated by a service member can file a lawsuit against the Department of Defense.

The legislation also would allow service members who experience personal injury or death because of a sex-related offense committed by a member of the military or a Department of Defense employee can sue. This also extends to those who failed to prevent or investigate such an offense, a summary of the bill says.

Lastly, the bill would require reviews into how the military responds to missing soldiers. The U.S. Government Accountability Office would be tasked with recommending new guidelines for distinguishing between common cases of runaway soldiers and others that might involve foul play.

“I saw to the Guillen family, you have our promise that we are going to make sure Vanessa's life has not been lost in vain,” Speier said while looking at the solider's mother, Gloria Guillen.