The US will use ‘every tool’ to secure the release of any Americans held in Venezuela, Pompeo says

The U.S. government will use “every tool” available to secure the return of Americans if they are being held in Venezuela, U.S. Secretary of State Mike Pompeo vowed on Wednesday, after Venezuelan officials said they had captured two U.S. “mercenaries” in a failed armed incursion 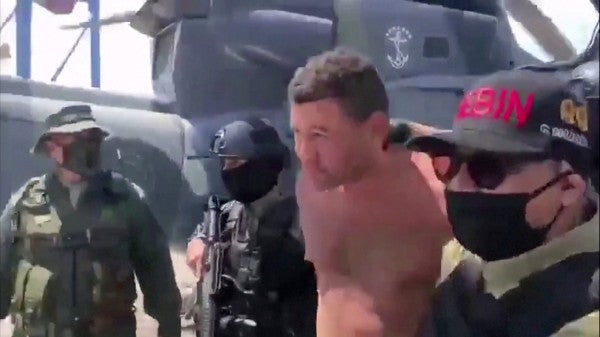 WASHINGTON (Reuters) – The U.S. government will use “every tool” available to secure the return of Americans if they are being held in Venezuela, U.S. Secretary of State Mike Pompeo vowed on Wednesday, after Venezuelan officials said they had captured two U.S. “mercenaries” in a failed armed incursion.

“There was no U.S. government direct involvement in this operation,” Pompeo told reporters, echoing President Donald Trump’s remarks a day earlier. He added: “(If) we’d have been involved, it would have gone differently.”

Venezuelan President Nicolas Maduro said on Monday that authorities there had detained a pair of U.S. citizens working with a U.S. military veteran who has claimed responsibility for the foiled incursion, launched last weekend.

Pompeo stopped short of confirming the Americans’ detention but called it a “consular matter.”

“We will start the process of trying to figure a way, if in fact these are Americans that are there, that we can figure out a path forward,” he said. “We want to get every American back. If the Maduro regime decides to hold them, we will use every tool that we have available to try and get them back.”

Asked who may have bankrolled the operation, Pompeo said: “We're not prepared to share any more information about what we know took place.”

Maduro said authorities arrested 13 “terrorists” involved in what he described as a plot coordinated with Washington to enter the country via the Caribbean coast and oust him. Eight people were killed, Venezuelan authorities said.

Maduro on Monday showed what he said were the U.S. passports and other identification belonging to Airan Berry, 41, and Luke Denman, 34. He said they were in custody and had been working with Jordan Goudreau, an American military veteran who leads a Florida-based security company. All three men are former U.S. special operations force members.

Washington has waged a campaign of sanctions and diplomatic measures against Venezuela in an effort to oust Maduro, a socialist leader they accuse of rigging elections in 2018. But the Trump administration has shown no apparent interest in military action.

Since early 2019, the United States and dozens of other countries have recognized opposition leader Juan Guaido as the legitimate interim president.

But Maduro remains in power, backed by Venezuela's military as well as Russia, Cuba and China, which some U.S. officials say privately is a source of frustration for Trump.

Guaido – often derided by Maduro as a U.S. puppet – has cast doubt on the government's version of Sunday's events.