Thousands of marchers began street protests on Wednesday to try to force leftist Venezuelan President Nicolas Maduro from power as tension grew between Russia and the United States over the political standoff in the OPEC-member nation. 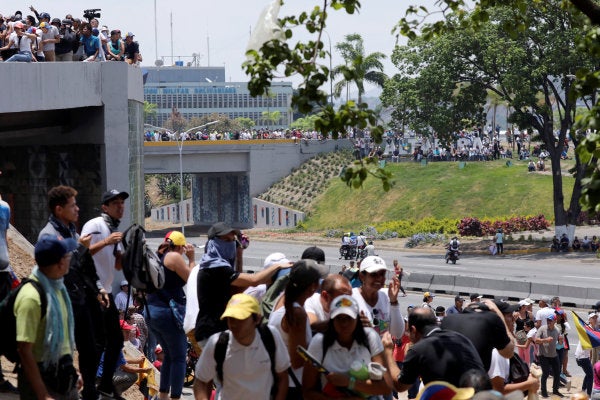 CARACAS (Reuters) – Thousands of marchers began street protests on Wednesday to try to force leftist Venezuelan President Nicolas Maduro from power as tension grew between Russia and the United States over the political standoff in the OPEC-member nation.

Opposition leader Juan Guaido faced a test of support after calling for the “largest march” in Venezuela's history against Maduro, even as the military has so far resisted calls to help remove him.

“If the regime thought we had reached maximum pressure, they cannot even imagine,” Guaido told thousands of cheering supporters in eastern Caracas. “We have to remain in the streets.”

Supporters banged drums and chanted, “What do I want? Freedom!” Guaido, – who heads the opposition-run National Assembly – is recognized as Venezuela's legitimate president by the United States, Europe and others.

He said he would consider a proposal from public workers to call for a series of work stoppages leading up to an eventual general strike to pressure Maduro, in power since taking over from his mentor, late President Hugo Chavez, in 2013.

The Venezuelan opposition has often staged huge street protests against Maduro but has failed to dislodge him despite deep economic recession and hyperinflation.

The United States and Russia are at odds over Venezuela, with Washington telling Moscow on Wednesday to keep out of “our hemisphere,” and the Kremlin warning the Trump administration against any “aggressive” moves against its ally Maduro.

Venezuela's armed forces have so far stood by Maduro, who retains the support of allies like Russia, China and Cuba.

That has frustrated Guaido's bid to assume the day-to-day functions of government on an interim basis – which he says would be a prelude to calling new elections.

Supporters of Venezuelan opposition leader Juan Guaido, who many nations have recognised as the country's rightful interim ruler, take part in a rally against the government of Venezuela's President Nicolas Maduro and to commemorate May Day in Caracas Venezuela, May 1, 2019.

Maduro, a socialist, calls Guaido a puppet of the United States who is seeking to orchestrate a coup against him.

Lavrov also condemned U.S. “interference” in Venezuela's internal affairs as a breach of international law, adding that dialogue between all political forces is required in Venezuela.

In turn, the United States has also accused Moscow of interfering in the South American country, an ally of Russia since the time of Chavez.

Pompeo said on Tuesday that Maduro had recently been prepared to leave Venezuela but changed his plan after Russia intervened. A spokeswoman for Russia's foreign ministry denied that.

“This is our hemisphere,” he told reporters outside the White House. “It's not where the Russians ought to be interfering. This is a mistake on their part. It's not going to lead to an improvement of relations.”

Acting U.S. Defense Secretary Patrick Shanahan said the United States had carried out “exhaustive planning” on Venezuela and had contingency plans for different scenarios, but added that the focus was on diplomatic and economic pressure.

The White House National Security Council scheduled a meeting for Wednesday afternoon to discuss next steps on Venezuela.

The size of Wednesday's protests will be a test for Guaido, amid frustration among some supporters that Maduro remains in office more than three months after the opposition leader invoked the constitution to assume an interim presidency, arguing that Maduro's 2018 re-election was illegitimate.

Some 300 protesters gathered on Wednesday in the La Victoria section of the western city of Maracaibo, which has been among the country's hardest hit by a recent wave of blackouts.

They blew whistles and held Venezuelan flags as cars drove by honking their horns.

“I think that even though it's not going to be immediate we have to fight for it,” said Anselmo Ledezma, 53, who attended the march with her daughters. “My biggest fear is not repression, but rather that this does not get resolved.”

Guaido on Tuesday urged the armed forces to support his effort to oust Maduro and appeared outside an air force base with dozens of National Guard members.

But there were no concrete signs of defection from the armed forces leadership.

Venezuelan living standards have declined even further in the first several months of the year, with blackouts and water shortages adding to hyperinflation and chronic shortages of food and medicine that have prompted millions to emigrate.

“Tomorrow, the first of May, we will have a large, millions-strong march of the working class,” Maduro said in a television address on Tuesday. “We have been confronting different types of aggression and attempted coups never before seen in our history.”

Elsewhere in Latin America, millions of Cubans took to the streets on Wednesday to protest new sanctions imposed on the Caribbean island by the Trump administration and the U.S. efforts to topple Maduro.

The annual marches across the Communist-run country, marking International Workers Day, provided the first opportunity to publicly protest a U.S. offensive against socialism in the region declared by Bolton late last year.