When booty calls: A Vermont Air Guard commander allegedly used an F-16 for a romantic getaway

The commander of the Vermont Air National Guard was quietly forced out of his job after bogarting an F-16 Fighting Falcon in what amounted to an interstate booty call with an Army officer in Washington, D.C. 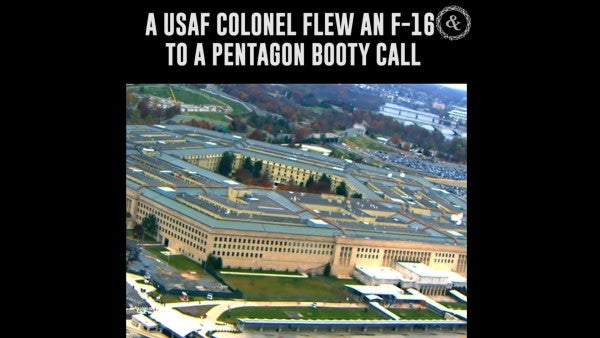 The commander of the Vermont Air National Guard was quietly forced out of his job after bogarting an F-16 Fighting Falcon in what amounted to an interstate booty call with an Army officer in Washington, D.C., according to a salacious investigation by VTDigger.

Just a year after taking command of the Burlington-based 158th Fighter Wing, Col. Thomas Jackman “took an F-16 flight to Washington, D.C., for a work trip that doubled as a romantic rendezvous with a female Army colonel who worked at the Pentagon,” VTDigger's Jasper Craven reports.

“Jackman was scheduled to attend a conference at Andrews Air Force Base, located just outside Washington, D.C,” Craven reports. “While the Guard says pilots do not typically use their planes to attend conferences, Jackman as wing commander had ultimate authority.”

The report was based on emails between Jackman and the unnamed colonel that corroborate their romantic relationship, as well as interviews with several former Guard members “with knowledge of the incident.”

When the colonel's superiors found out about his alleged affair, “they were quick to take action, according to a former Guard member with knowledge of the investigation that followed,” Craven reports. “Jackman was ordered to fly home on a commercial flight, three former members said. [Lt. Col. Terry Moultroup] then traveled from Burlington to Washington to pick up Jackman's F-16 and fly it home.”

When reached by Task & Purpose, Army 1st Lt. Mikel Arcovitch, a Vermont National Guard spokesman, declined to comment on the incident, noting that regulations prohibit him from discussing investigations or personnel matters.

Still, Arcovitch did tell Task & Purpose that the normal length of a wing commander's tour was between two and four years.

“Typically no less than two, and no more than four,” he said.

Jackman only spent about one year in command of the 158th Fighter Wing. He was replaced by Col. Patrick Guinee in early 2015, according to Arcovitch.