Rep. Duncan Hunter used campaign funds to pay for $600 of airline fees to fly a pet rabbit, one of... 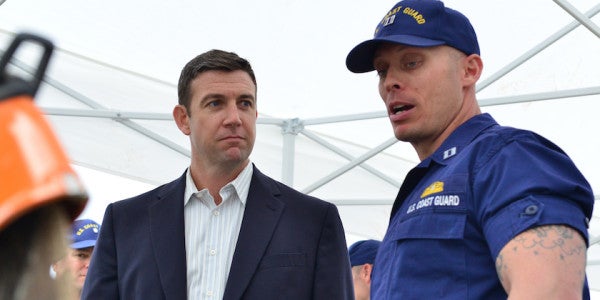 Rep. Duncan Hunter used campaign funds to pay for $600 of airline fees to fly a pet rabbit, one of the more colorful expenses to surface in an ongoing review of his practices.

Hunter’s staff told the Press-Enterprise newspaper that the House Office of Congressional Ethics questioned the bunny expenses — offered as an example of over-reach by the agency.

The ethics office’s independence was nearly clipped this week as one of the first orders of business for the GOP-controlled House, until President-elect Donald Trump and others questioned the timing of the move.

Critics saw the proposal as weakening an important check on legislative abuses of power. Hunter spokesman Joe Kasper defended the proposed procedural changes, according to the Press-Enterprise.

“The concerns are strong enough that it nearly prompted a significant structural change,” Kasper said.

The ethics office last year conducted a review of Hunter’s campaign expenses. Release of the report, and any follow-up action by the House Ethics Committee, was recently postponed pending swearing-in of the new Congress.

Hunter, R-Alpine, has reimbursed his campaign about $62,000 in campaign expenses that were personal in nature or lacked proper documentation, including oral surgery, a garage door, video games, resort stays and a jewelry purchase in Italy.

The expenses came to light after inquiries by the Federal Election Commission and The San Diego Union-Tribune, and Hunter then hired a law firm to conduct a review that has not been made public.

Use of campaign funds for personal benefit is prohibited by federal law, as it might give undue influence to contributors. Most of Hunter’s campaign funds come from defense and transportation companies whose business is affected by committees upon which he serves.

In the Press-Enterprise, Kasper criticized the as-yet-unreleased ethics office report on Hunter, saying “findings or implications are significantly misrepresented or even exaggerated.”

As an example, Kasper mentioned the rabbit transportation fees — which were apparently charged to the campaign credit card by mistake, instead of using airline miles racked up on the campaign dime.

“(The office) has in their report $600 in campaign expenditures for in cabin rabbit transport fees,” Kasper said. “Since travel is often done on (airline) miles – which is entirely permissible – the credit card connected to the account was charged several times even when his children were flying.

“This was nothing more than an oversight. In fact, it’s such an obvious example of a mistake being made but (the office) wants to view it through a lens of possible intent,” Kasper said. “The same goes for many other expenditures. Many of Rep. Hunter’s repayments had to do with mistakes under specific circumstances, and in other cases there were bona fide campaign activities connected to expenditures that (the office) was not aware of and didn’t account for.”

Hunter has previously explained problems with campaign spending that included the campaign charge card being blue and therefore confused with a more appropriate card.

The congressman has repaid more than $6,000 to United Airlines for personal or undocumented uses of campaign funds. His accounting of the repayments did not itemize pet travel costs.