‘I feel like I am up on a pedestal:’ World War II Navy veteran turns 100 on Monday 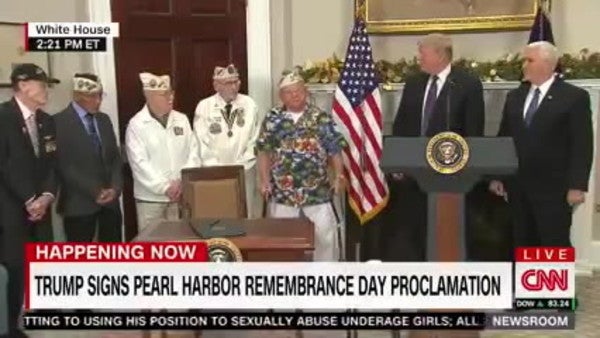 Carl Lingenfelter remembers sitting on his grandfather's lap as a young boy listening to his stories about fighting for the Confederacy during the Civil War.

His grandfather recounted how his commander, Gen. Sterling Price, refused to surrender after Gen. Robert Lee's capitulation at Appomattox Court House and instead led his remaining troops to Mexico.

“Grandpa would tell these stories to me,” Lingenfelter said from the kitchen table of his Barberton home. “And when I went to school, I didn't think much of Abe Lincoln. Neither did grandpa.”

Lingenfelter and his grandfather, who originally was from Clinton County, Mo., are the only members of his family to serve in the military during wartime.

“I feel like I am up on a pedestal,” the Navy veteran said about the shrinking group. “So many years went by, and no one paid attention.”

Local veteran groups are paying attention and planning a big birthday bash for Sunday afternoon, one day before Lingenfelter completes his 100th year.

“I've got so many good friends I am so thankful for,” he said.

More than 70 years have passed since Lingenfelter came home from World War II. He left as a 22-year-old farm kid from Castle Rock who had never traveled farther than Portland. He returned home after 3 1/2 years of military service that took him across the globe during the most violent, perilous period the world has ever known.

Lingenfelter's father died two days before his 49th birthday in September 1929 from mastoiditis, a serious bone infection near the ear. Penicillin would not be widely available for more than a decade. His father succumbed to the infection only two months after Lingenfelter turned 10.

It also was two months before the stock market crashed, which rapidly accelerated the economic decline that became the Great Depression. Lingenfelter's father had a $2,500 insurance policy. His mother used the payout to purchase a 5-acre farm about a mile south of Castle Rock.

The farm had 50 fruit trees, including apple, cherry, plum, pear and peach. The family raised chickens, hogs and cows to provide meat and dairy during the hard times of the 1930s.

“We had lots to eat,” Lingenfelter said. “We just didn't have any money.”

Most of the farm work was done by hand, without the benefit of machinery or draft animals. The family would scrape together a few dollars to hire someone to plow a field.

“The kids whose folks had a business, we thought they were rich,” he sad. “But in a little town, they were probably just eking out a living.”

Lingenfelter said about 1,200 people lived in Castle Rock when he was growing up, at a time when the city had five clothing stores, two mercantile stores that sold groceries, clothing, shoes and feed, and one creamery.

“I can remember carrying a bucket of cream down there and selling it,” he said.

Lingenfelter joined the Navy in April 1942, five months after the Japanese attack on Pearl Harbor roused a largely isolationist nation and unleashed an industrial powerhouse that would produce the ships, planes, tanks and other armaments to smash the Axis powers.

When Lingenfelter enlisted, he was four years out of high school and working at a feed store, earning $125 a month, “which was big money in those days,” he said.

“My boss was on the draft board,” he said. “He said he could keep me out. I said I didn't want to stay out.”

Lingenfelter served on three ships but didn't see combat until he transferred to the USS Vicksburg. The light cruiser supported the invasions of Iwo Jima and Okinawa in 1945 during some of the fiercest fighting in the Pacific.

Lingenfelter said he didn't dwell on the chances of being killed.

“When you are in action, you didn't have time to worry about things like that,” he said.

Vicksburg was one of five cruisers, along with six battleships and an assortment of destroyers, that started shelling Iwo Jima three days before Marines landed on the volcanic island's black sand beaches. Lingenfelter and other sailors hollered cheers of encouragement as landing crafts passed the Vicksburg and headed toward shore, where Marines would face a hellish barrage of shot and shell.

“It was a slaughter when they put them on the beach,” he said. “It was terrible to be right there and see so many men killed.”

From aboard the Vicksburg, Lingenfelter could see the American flag after it was raised on Mount Suribachi on the fifth day of what would be a bloody five-week slog to wrench the tiny island from Japanese control.

Iwo Jima was one in a series of island-hopping maneuvers as the U.S. military slowly closed on Japan. Next up was Okinawa, a much larger island that would become the site of the bloodiest battle of the Pacific. The Vicksburg was there for shore bombardment as the Army and Marines waged a ferocious 82-day campaign against Japanese soldiers and civilian conscripts.

“We fired more rounds on Okinawa than we did on Iwo,” Lingenfelter said.

Okinawa was the last big battle of World War II. Seven weeks later, after the U.S. dropped atomic bombs on Hiroshima and Nagasaki and the Soviet Union entered the war, Japan finally agreed to surrender.

Lingenfelter said he and other shipmates were watching a movie on the Vicksburg's fantail when someone rushed in and yelled the war was over. Fleet Adm. William “Bull” Halsey later sent an official communique confirming hostilities had ended but adding: “If any Japanese airplanes appear, shoot them down in a friendly way.”

The Vicksburg proceeded to Tokyo for the formal Japanese surrender, held Sept. 2, 1945, on the deck of the battleship USS Missouri. During the ceremony, the Vicksburg cruised back and forth at the entrance to Tokyo Bay and used a radio-controlled drone for target practice, Lingenfelter said.

“We just let them know we were still there, ready to go,” he said.

“The people were scared to death of you,” he said. “And I never saw one building that was standing.”

Lingenfelter had enough service points to leave the Navy following the war. He could have re-enlisted but decided to return home with the rank of gunner's mate 2nd class. After the Vicksburg arrived in Pearl Harbor, he transferred to the USS Arkansas for the final leg of his trip home, from Hawaii to Seattle.

“Life was so different there,” he said about his brief time on the battleship. “The food was just like eating home cooking after being on that cruiser.”

Lingenfelter still remembers what was served for Wednesday breakfast on the Vicksburg: dried beans and prunes.

After returning to Castle Rock, Lingenfelter's old boss, now a Cowlitz County commissioner, got him a job working on the county roads. He later became a cross-country trucker, starting on two-lane roads before the interstate freeway system was built.

Lingenfelter retired in 1983 after 30 years as a trucker. He and his wife, Margaret, who died in 1997, had a son, who lives in Vancouver, and daughter, with whom he lives in Barberton.

Years ago, Lingenfelter was invited to anniversary commemorations on Iwo Jima but declined.

“I had no desire to go,” he said. “For one thing, I think the Marines should get the credit. They went through hell there.”

“I had no fond memories of the place,” he said. “And another thing, they had Japanese there. And I wasn't prepared to be friendly with them.”

The memories of seeing Marines mowed down on the beaches, the stories of captured Americans being subjected to appalling cruelties, were still too raw for him. Those emotions were strengthened when he read “Flags of Our Fathers,” a book about the Battle of Iwo Jima that described how Japanese soldiers gruesomely tortured a captured Marine, Ralph Ignatowski.

“I still hate them for what they did,” Lingenfelter said. “I know I should get over it. … You are going to kill people in a war. But to torture them like they did? I just can't see it.”

“I feel sorry for the people who had that nuclear bomb, two bombs, dropped on them,” he said. “But we gave them every chance in the world to surrender.”

Lingenfelter said he always has been healthy and never smoked cigarettes, even though he served in the military when smoking was deeply ingrained in the culture.

“To be a healthy old man, you have to be a healthy young man,” he said. “And I have to think that not smoking had something to do with it.”

Growing up on a farm, he drank milk. Once he was the Navy, it was traditional for a sailor going off watch to go below deck for a cigarette and cup of coffee.

He always has been a light alcohol drinker.

“Alcoholism runs in my side of the family, and I decided years ago I wasn't going to be one of them,” he said.

Lingenfelter stays active by regularly walking the interior of Vancouver Mall, which unlocks its doors at 7 a.m. for walkers, long before stores open to shoppers. One lap inside the mall, including all side nooks and crannies, is about a half mile.

“That's a big part of my day,” he said. “We are waiting for them to open. I walk a lap and have coffee, visit some. Then I walk another lap.”

Lingenfelter still drives. He took Uber to the Washington State Department of Licensing office when he needed to renew his driver's license at age 98, just in case the office said no because of his age.

“It's got to be an emergency to drive after dark,” he said. “And I try to stay off the roads during rush hour.”

As a surviving World War II veteran, Lingenfelter is receiving more attention and has been in four parades this year. During the Fourth of July parade in Ridgefield, he was introduced to a 104-year-old man who tootles around town on an electric golf cart.

“When I met this 104-year-old guy, I said, 'Gosh, I think I have another four years,'” Lingenfelter said.

SEE NEXT: 70 years later, WWII vet gets medals he didn't know he earned during the Battle of Iwo Jima