"What these four people did was erode the trust of people who wanted to donate to our veterans," Minkler said Thursday during a ceremony at the Clark County Sheriff's Office. "This is really the worst of the worst." 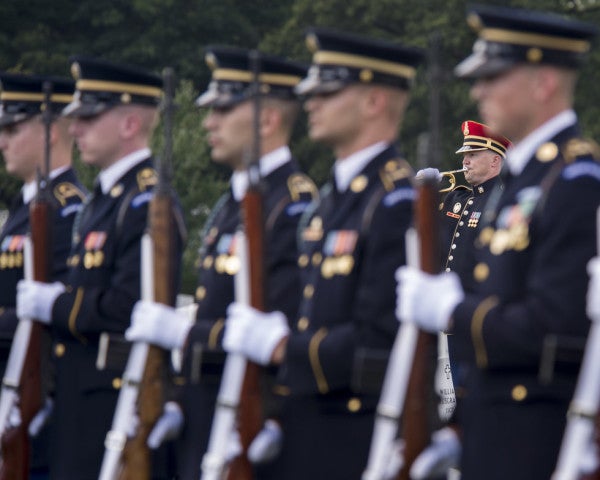 JEFFERSONVILLE, Ind. — Four people charged with defrauding more than 600 people in six states out of $125,000 they believed was intended for U.S. veterans and their families have been sentenced to federal prison on Thursday, while three officers who investigated the case were honored by U.S. Attorney Josh Minkler.

James Linville, Thomas Johnson, Joanie Watson and Amy Bennett were charged in March 2018 with conspiracy to commit wire fraud, and on Wednesday and Thursday, each pleaded guilty to their varying roles in the five-year-long criminal operation and were sentenced at the United States Courthouse in New Albany.

Linville was sentenced to five years, Watson, 42 months, Johnson and Bennett both received three years. Since they are federal charges, the defendants will have to serve at least 85 percent of their sentences in a federal institution without the possibility of parole.

“What these four people did was erode the trust of people who wanted to donate to our veterans,” Minkler said Thursday during a ceremony at the Clark County Sheriff's Office. “This is really the worst of the worst.”

Throughout the course of the fraudulent operation, individuals and businesses in Indiana, Kentucky, Ohio and to lesser degrees in three other states were contacted through phone, fax and in-person by the defendants, who solicited donations they said were for the nationally known legitimate organization Wounded Warrior Project.

Linville and Johnson also used aliases Sgt. Bob Davis and Paul Bradley, respectively, to pretend they themselves were involved with the military. Minkler said they have no ties to the services.

The donations were obtained in the form of cash, gift cards and in-kind donations. Some donated 14 or more times to the fraudulent scheme, believing the funds were going to U.S. veterans.

“It was a really cruel scheme and the money was used to fuel a drug habit,” Minkler said. “There have been some despicable frauds, but this is clearly one of the most despicable frauds … I've ever seen.”

Bowyer, who initiated the case at the Clark County level, was the lead local law enforcement, and “continued to play a critical part after federal agents became involved,” Minkler said. Ely, operating as lead federal agent, was able to determine that “not a penny” of the funds went to the intended populations. Ehringer “provided valuable assistance in the case and he was always on call to help with the case in any way possible,” Minkler said.

Together, he said the team presented a “seamless case for the prosecution.”

“Without these law enforcement officers, these individuals would never have been prosecuted and this scam would have gone unchecked,” Minkler said.

Clark County Sheriff Jamey Noel said he appreciated having the strong federal partnership and is proud of the officers who brought the case home.

“I'm proud of all the hard work they did on this and the partnership that we have with the U.S. Attorney's office and the Secret Service and all our federal law enforcement partners,” he said. “Especially this case — scamming veterans and people thinking they're helping veterans in need — to see the justice an the hard work of the two agents and Maj. Bowyer, it's satisfying.”

Minkler said he hopes the crime does not prevent people from donating to legitimate causes; he recommended those in doubt may check with their local Better Business Bureau.

Aprile Rickert is the crime and courts reporter at the News and Tribune. Contact her via email at aprile.rickert@newsandtribune.com or by phone at 812-206-2115. Follow her on Twitter: @Aperoll27.

©2019 The Evening News and The Tribune (Jeffersonville, Ind.)

Visit The Evening News and The Tribune (Jeffersonville, Ind.) at newsandtribune.com