A World War II veteran picked up a $1,500 tab for military families at his local Chick-fil-A

World War II veteran Edmund Rusinek turns 92 years old in a few days. To mark that milestone, he treated himself to a rather extravagant gift – the honor of buying some $1,500 worth of meals for military families 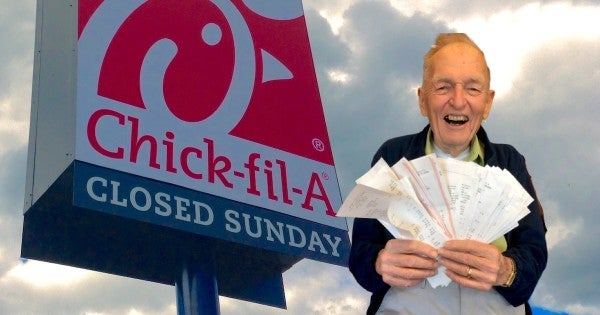 World War II veteran Edmund Rusinek turns 92 years old in a few days. To mark that milestone, he treated himself to a rather extravagant gift – the honor of buying some $1,500 worth of meals for military families who happened into the Rossmoor Chick-fil-A last weekend.

It wasn't the first time Rusinek surprised active service people with his largess, nor will it be his last. But it was his most generous.

“This tradition, so to speak, got started in 1945 when I was a draftee training in Little Rock, Arkansas,” Rusinek said. “To take a break from the GI food, some of my buddies and I left base for some good ol' Southern food.

“At the restaurant, an elderly gentleman stepped up to us and asked, 'Can you do me a favor? Will you let me buy your lunch? If you want to thank me, pass it down.'”

Rusinek, whose birthday is Feb. 19, has been passing it down ever since he landed his half-century career in engineering. “Someone did it for me, and I want to do it for others,” he said.

And he uses the same verbiage that so touched him all those years ago: “Can you do me a favor and let me buy you lunch?”

Rusinek and his wife, Krystyna, raised their three children in Rossmoor, a bedroom community wedged between Los Alamitos and Seal Beach.

“Fortunately, I live near an air base and a Navy base,” Rusinek said, referring to the Joint Forces Training Base and the Naval Weapons Station. “There are lots of kids in the military around here, and they all look so young to me.”

Rusinek, who grew up outside of Detroit, said he remembers “the feeling of being a long way from home and family.”

“Back then, towns would throw Saturday night dances for servicemen stationed there so they could get off base to socialize,” he recalled. “There's nothing lonelier than training camp on weekends.”

Times have changed, he noted. “Everyone is too busy with their own lives,” Rusinek said. “The only thing the kids have around here is the American Legion, and that's a bunch of old geezers like me.”

Rusinek was a freshman at the University of Michigan when he was drafted into the Army.

“We were preparing for the invasion of Japan,” he said. “I had completed 16 weeks of training when the bomb was dropped (on Hiroshima).”

Instead of in Japan, Rusinek wound up at the Czechoslovakian border for two years as a staff sergeant. Afterward, he returned to Michigan and finished his engineering degree, ultimately finding work at North American Aviation in Downey.

He has yet to forgive Rockwell for taking control of NAA in a late-1960s merger: “They stole it,” he pronounced.

Rusinek retired from Boeing at age 75 after it bought Rockwell's space divisions in 1996, but still considers himself an “NAA man.”

Chick-fil-A offers discounts to active-duty service people and veterans, which is why Rusinek chose it for his birthday bash. “A lot of military people and their families go there,” he said. “I want them to know that someone cares.”

On Friday, Feb. 8, Rusinek dropped by the neighborhood Chick-fil-A and handed a wad of cash to manager Giola Arkis – as well as fliers explaining his contribution. She quickly burned through the first installment the following Saturday morning, at which point he gave her permission to use his credit card.

“Edmund is a regular customer,” Arkis said. “He always comes in for a salad, cookies and coffee. We call him our local sweet thing.”

The following day, Rusinek hung out at the restaurant for three hours shaking hands and snapping photos with service people. “Everybody was so happy,” Arkis said.

Arkis estimated that, between the cash and the credit card, Rusinek spent about $1,500 on meals.

Rusinek reacted with surprise over that total: “Really? I guess I'll know for sure when I get my credit card bill in the mail.”

SEE ALSO: In Most Texas Story Ever, Army Convoy Stops At Whataburger On Way To The Border